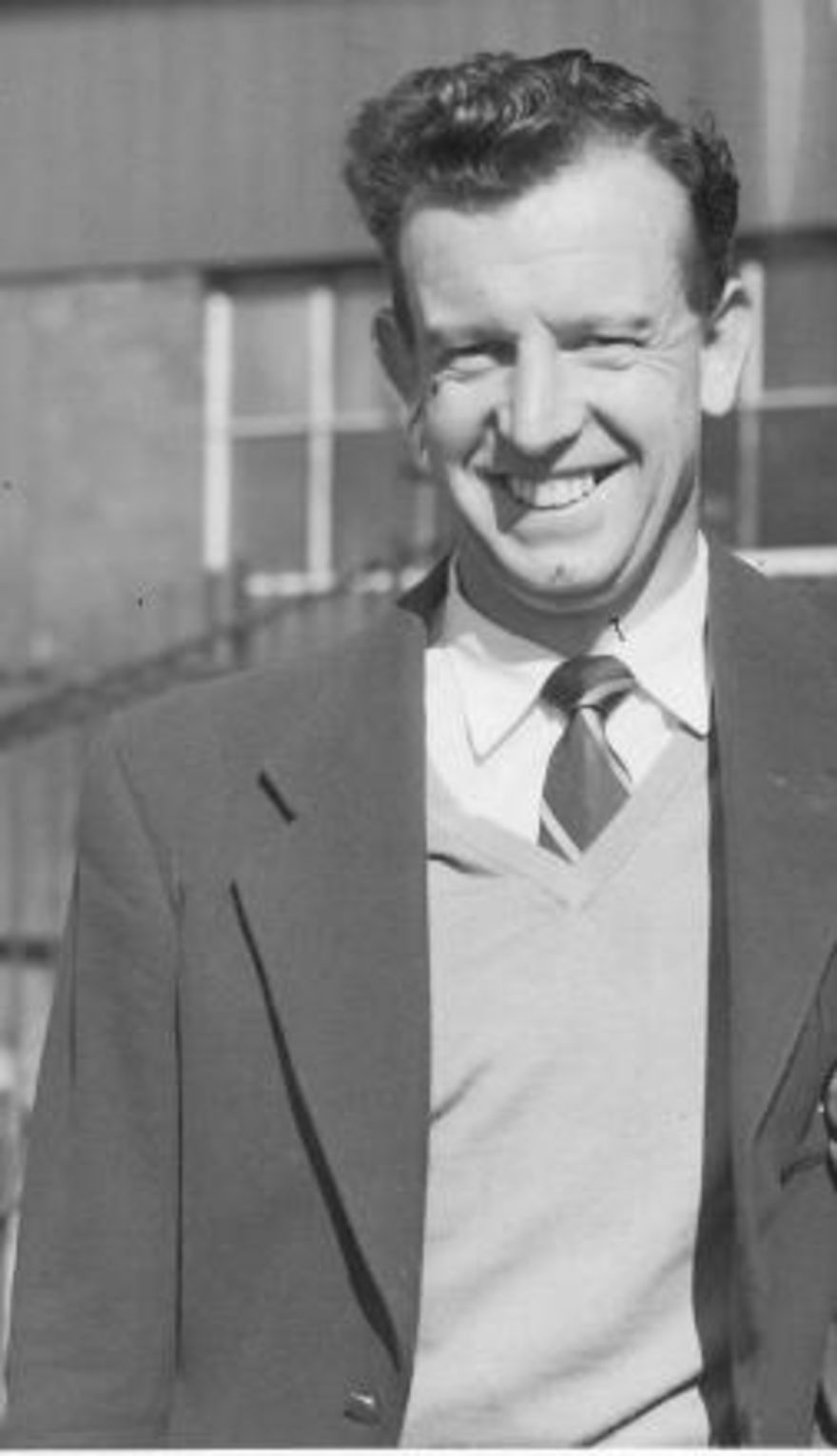 Everyone at Dundee Football Club was saddened to hear of the death of former player George Merchant who passed away last week aged 89 in a Carnoustie nursing home after a long battle with illness.

George was born in Dundee on May 13th 1926 and attended Rockwell School and after playing with Dundee Stobswell, he signed for Third Lanark as a defender before his commanding presence soon earned him a transfer to Aberdeen where he would make just one appearance in the Dewar Shield.

Dundee manager George Anderson signed George from The Dons in 1951 and moved him into the attack, with the new number nine quickly becoming a fans’ favourite at Dens Park. When the great Dundee side of the early Fifties began to break up it was a chance for George Merchant to emerge and he would go on to become Dundee’s top scorer four seasons in succession and equal the club record for most goals in a Scottish Cup match.

In 1953/54 Dundee still had players like Bill Brown, Tommy Gallagher and Doug Cowie and of course that season was the last time the Dens Park faithful would see the legendary Billy Steel strut his stuff in Dark Blue. Later that season however the fans would see George Merchant break into the team and despite not making an appearance until as late as January, he would finish as top goal scorer with eleven goals to his credit.

Merchant was a big bustling centre forward when centre forwards were indeed meant to be just that. What George lacked in finesse, he more than made up for in pace and aggression and he was a handful for any defence.

However George hadn’t always been a centre forward and in fact had made his first team debut a couple of seasons earlier as a centre-half. In season 1951/52 George made eleven appearances deputising for the injured Doug Cowie and again made three starts in the same position the following year.

George made his first top team appearance as a striker at Palmerston Park against Queen of the South on January 16th 1954 and scored Dundee’s goal in a 5-1 defeat.

Three weeks later in the Scottish Cup against Albion Rovers in Coatbridge, he netted for Dundee in a 1-1 draw and then in the replay scored all four goals as Dundee romped to a 4-0 win. This equaled a club record for most games in a Scottish Cup match set by Alec Stott against St Johnstone in 1949 and matched by John Duncan against Stranraer in 1973 and remains a club record today.

Whilst eleven goals in thirteen games in his first season up front was impressive, George was determined to make certain that it was no flash in the pan and in the following season in the League Cup, Merchant netted five times in his opening three times. He scored against Celtic in a 3-1 victory at Dens before a crowd of 29,000 and three days later he whacked in a hat-trick against Falkirk in another 3-1 success.

A week later on August 28th George was again on the score sheet against Hearts in front of 29,500 at Dens as Dundee ran out 4-1 winners but it was to be his last game until November as he got injured against the Jam Tarts. However he still finished as top goal scorer with sixteen goals which included the winner against Rangers at home in January in a 2-1 win.

In season 1955/56, despite making only twenty-four starts, Merchant finished top scorer for the third season in succession with fourteen goals in all competitions. In the Scottish Cup Dundee were paired with Second Division Dundee United at Tannadice and the city’s underdogs gave their more illustrious opponents a bit of a fright.

Merchant notched his customary goal as the teams fought out a 2-2 draw on a snow covered surface and the general consensus was that the pitch had been a great leveler. For the replay the following Wednesday however Dundee made no mistake when their lower league neighbours were put to the sword 3-0 and George scored the first in front of a 17,000 afternoon crowd.

At the end of the season George also curiously scored in two different Forfarshire Cup Finals when he first scored a brace in a 2-1 win over Arbroath at Dens and then two weeks later scored four in a 6-0 rout of Montrose in the Final held over from the previous year’s competition.

Season 1956/57 was the last time the Dens Park support would see George sport a DFC badge on his shirt and he managed eleven goals in thirteen starts before falling out of favour and being transferred to Falkirk in a £10,000 deal which included left-back Andy Irvine. There he won a Scottish Cup winners medal at the end of the season after he scored the first in a 2-1 replay win over Kilmarnock at Hampden.

Many thought his best days were behind him when George was persuaded to join a struggling Falkirk side, but he was to enjoy an Indian summer to his career at Brockville where he was reunited with his former trainer at Dens Reggie Smith who led The Bairns to their Scottish Cup glory.

In goal for Falkirk at Hampden was future Dee Bert Slater and when Falkirk moved to their new stadium in July 2004, the opening game was against Dundee for the Merchant-Slater trophy and Dundee and Falkirk legends George and Bert were proud guests

George hung up his boots in 1958 and had a brief spell as a coach at Dunfermline before working for a printing company in Aberdeen. He moved back to the Dundee area and started his own printing company in Broughty Ferry in the mid-1970s and retired, aged 70, in 1996; living latterly in Carnoustie.
George was known as “The Merchant of Menace” and his goal scoring record suggests that he should not have been transferred from The Dee so soon. He was a real old fashioned centre forward and a real Dundee man and his dashing style will always been remembered at Dens Park.