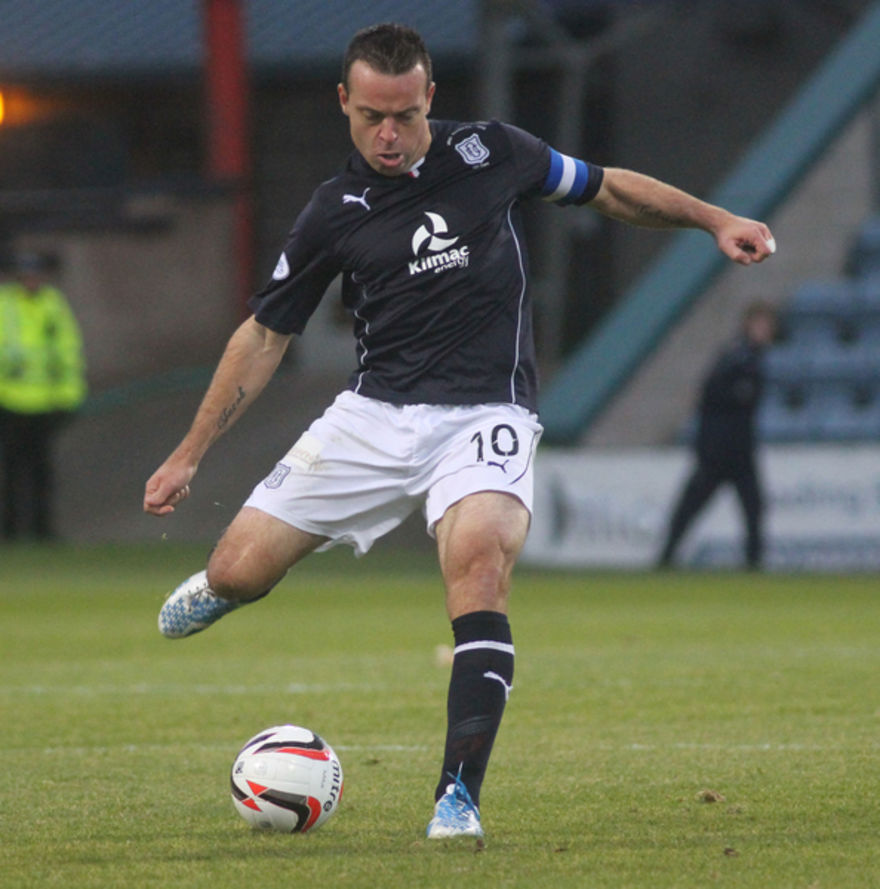 Everyone at Dundee Football Club would like to congratulate captain Gavin Rae on making his 300th appearance for The Dee in last Saturday’s 4-0 win over Cowdenbeath. Gavin, now in his third spell with the club, becomes just the 21st player in 120 years to reach his third century of games in dark blue and his time at Dens has seen him win the First Division, play in the Scottish Cup Final, score in the U.E.F.A. Cup and become Dundee’s first Scottish internationalist in fifteen years.

When Scotland manager Craig Brown was asked in a press conference why he had called up Dundee midfielder for an international friendly against Poland in Bydgoszcz in April 2001, he replied that it was because “he played for Dundee”. While he was attempting tongue in cheek to show his fondness for the club with whom he won a Scottish League Championship medal, Brown failed to give credit to the popular Dark Blue midfielder who was the first Dundee player to win a Scotland cap since Robert Connor had done so against the Netherlands in 1986.

Aberdonian Rae was born on November 28th 1977 and made his debut for The Dee in front of just 828 fans at Firhill Stadium when he came off the bench to replace Andy Cargill in a 1-0 win over Hamilton Academical in March 1996.

It was Dundee manager Jim Duffy who gave Rae his debut but when he left to join Hibs nine months later, Gavin found his chances limited under new manager John McCormack who was very close to letting Rae join Brechin City for a nominal fee. When McCormack left in February 1998 however, his replacement Jocky Scott said that all players in the squad would get a chance to prove themselves and Gavin managed to force his way back into the first team squad as Dundee went on to win the First Division title and secure promotion into the inaugural Scottish Premier League.

It was in the S.P.L. that Gavin started to flourish and in Dundee’s first season back in the top flight, he made twenty-three starts, two more than his total in the previous three campaigns. By the end of the season he had established himself in the side, starting the last ten matches as Dundee finished strongly and secured a fifth place spot; their highest league placing in twenty-five years.

The following term Gavin missed just one match, making the most appearances of any of the Dundee squad and in November 1999, he scored a famous injury time winner in a 2-1 triumph over Rangers at Ibrox to cement his popularity with the Dens Park support.

Rae had been used as both a right-back and an attacking midfielder during his time at Dens and his philosophy of hard work, coupled with his excellent attitude was now paying dividends. Gavin had sought to improve his fitness and his dedication had begun to pay off as he was now employed as a deep-lying midfielder and broke into the Scotland Under-21 side.

It was all change for The Dee in the summer of 2000 however when manager Jocky Scott was replaced by Ivano Bonetti and while the Italian brought in a host of international talent to Dens Park, including Argentinean superstar Claudio Caniggia, Gavin was one of the few Scots who managed to hold on to a place in the side.

Rae now became highly influential in the Dark Blues’ midfield and was rewarded for his performances in an exciting Dundee side which secured a top six finish by being called up for that Scotland international against Poland in which he started in the 1-1 draw and went on to win fourteen full international caps.

At the start of Bonetti’s second season in charge, Gavin opened the campaign with a goal in a 2-2 draw with Dundee United at Tannadice. In his time at Dens Gavin has had a terrific record in the derby, playing in six wins and six draws and he revelled in the big game atmosphere.

The undoubted highlight of his time at Dens however came the following season when Dundee reached the Scottish Cup Final and qualified for Europe for the first time in twenty-nine years. En route to the Final, Dundee’s number eight played in all five games and scored in the 2-0 win over Partick Thistle in the third round and having made his debut in front of 828 fans in Glasgow, he now lined up in front of 47,136 fans at the National Stadium in the same city.

Dundee however lost out in the Final 1-0 to Rangers but as S.P.L. champions, the Ibrox side qualified for the Champions’ League which allowed Dundee to enter into the U.E.F.A. Cup for the first time since 1974.

In the preliminary round in August, Dundee drew the unknown K.S. Vllaznia from Shkoder in Albania and a terrific performance in the first leg saw Dundee become the first Scottish side to win in Albania with a 2-0 victory.

In the second leg at Dens, Dundee were comfortable 4-0 winners and the highlight of a very enjoyable night for the 8254 crowd, was a terrific goal from Gavin when he thundered in a ferocious volley from just outside the box which flew into the top of the Albanian net. It was one of the best goals Dens Park had ever witnessed.

In the first round proper, Dundee faced Serie A side and Intertoto Cup winners Perugia but the European adventure went no further as Dundee went out 3-1 on aggregate after over 2000 Dees travelled to Italy to watch their side in action.

A month later Gavin won his eighth Scotland cap in the Euro 2004 play-off against the Netherlands in Amsterdam but on returning home from Holland, he was greeted with the devastating news that Dundee had plunged into administration.

It was the beginning of the end of the first part of Gavin’s Dark Blue career as his consistent performances had made him one of Dundee’s most saleable assets. In December Rangers displayed little festive spirit with a £50,000 offer and tried to get the Scottish internationalist on the cheap with further bids of £100,000 and £125,000. Dundee however refused to bow to Rangers tactics and by the end of the month got the quarter of a million pound fee they had been holding out for.

Rae had been a grand servant in his ten years with Dundee and his driving midfield play would be missed. Before departing he posted an emotional thank you letter to the fans online for all their support and did the club a great service by stating a willingness to go anywhere so that the club would receive as big a fee as possible in their hour of need. The fans were grateful and Administrator Tom Burton echoed the supporters’ appreciation by stating, “Gavin recognised that his move could ease our situation and his professionalism has been exemplary.”

Gavin’s time at Ibrox was strewn with injury although he was made Rangers’ captain by manager Paul Le Guen after he had stripped Barry Ferguson of the armband but when the Frenchman left Govan, his replacement Walter Smith reinstated Ferguson as skipper. Smith did however offer Gavin a new contract but he decided it would be better to find regular first team football elsewhere and he headed down south to join Cardiff City in the summer of 2007 as a free agent.

In his four years in Wales, Rae made 152 appearances, scoring eight times and the undoubted highlight was playing for the Bluebirds in the 2008 FA Cup Final. That season saw Gavin play fifty-five times in all competitions, more than any other Cardiff player, including all six matches on the ‘Road to Wembley’ but it was an ultimately disappointing end to his debut season as his English Cup Final ended in the same score line as his Scottish one with Dundee five years earlier in a 1-0 defeat to Portsmouth.

The summer of 2011 saw Gavin leave Cardiff under freedom of contract and after being linked with a host of clubs, including Leeds United and Aberdeen, he decided in October to return to Dens for a second spell under his former Dark Blue captain Barry Smith.

Initially signing a deal until Christmas, Gavin quickly had a huge impact on Dundee’s results as they shot up the league from bottom to second by the New Year with some impressive displays; none more so than the 6-1 demolition of Hamilton at New Douglas Park in November.

Rae extended his deal until the end of the season in January but by the end of the month his top drawer displays had not gone unnoticed and he got the chance to join his home town team Aberdeen in the SPL; a move that no Dundee fan could begrudge him.

After eighteen months at Pittodrie Gavin again became a free agent when new Dons manager Derek McInnes started to overhaul his squad and he was given the chance to join The Dee again by manager John Brown after a man of the match performance for Aberdeen against Dundee in May.

Gavin therefore joined Dundee for a third time at the start of this season and was immediately appointed club captain by Bomber who had known Gavin well from their time together at Ibrox.

Gavin is now captain for his former Scotland team mate Paul Hartley who took over the Dens Park hotseat in February and they will be hoping that they can lead Dundee to the Scottish Championship title and back to the top tier in a few weeks time. His 300th appearance saw Dundee go back to the top of the league and if they do it will be a fitting way for Gavin to celebrate as his lifts the Championship trophy in front of a joyous Dark Blue support who had first watched him at Dens as a young nineteen year old against Morton almost eighteen years to the day.