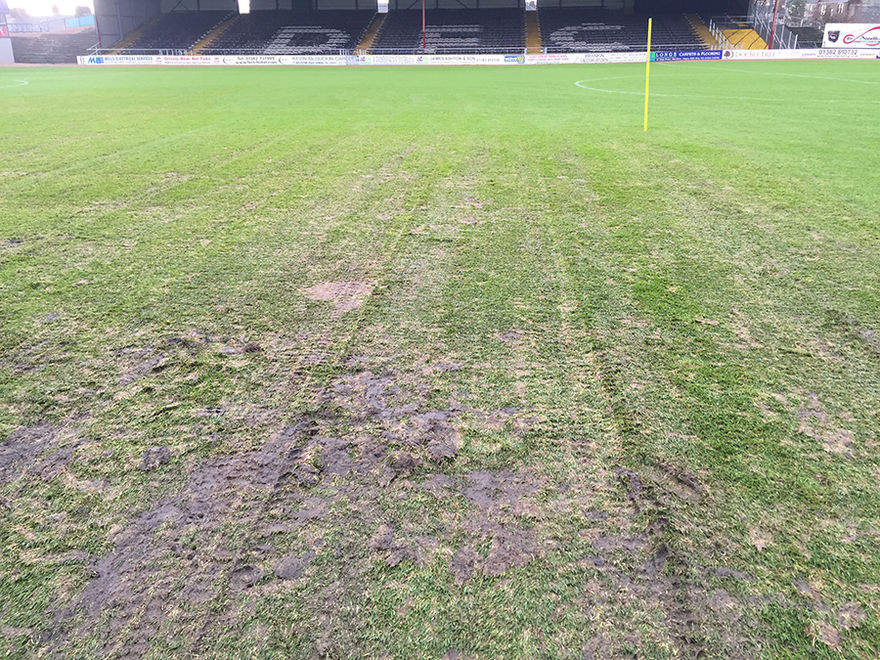 The Club can confirm today that our 4th Round tie in the William Hill Scottish Cup against Falkirk has been postponed until Tuesday 26 January 2016 with a 7.45pm kick off.

The Dens Park pitch has a major subterranean drainage issue (200m2) which is rendering part of the surface completely unplayable. We have major compaction in the sub soil for around 12” above the drains which is preventing the water reaching the drains and causing it to back up on to the pitch. This has resulted in a thick layer of thatch to form beneath the surface which is also an impediment to effective drainage as this acts as a sponge causing the turf to retain water.

This problem can only get worse and indeed is beginning to spread outwith the original footprint.

We have consulted with experts from the Sportsturf and Landscaping Industry and have been advised that this area needs to be excavated and rebuilt with a new layer of turf also being installed. The undersoil heating pipes make this work difficult as a lot of the excavation will need to be done by hand to avoid damage to the pipes.

This work will take at least a week and with the postponement the Club plan to begin the works as soon as possible.

This issue has arisen due to the unprecedented rainfall over the past weeks which we have experienced in Dundee. Our groundstaff have worked tirelessly through this period and have gone above and beyond to give each of our fixtures the best chance of going ahead on scheduled dates.

We have fully discussed the matter with Falkirk FC. They have shown great understanding and we look forward to welcoming them to Dens on the 26th of January.

Supporters should note that tickets for the original fixture will be valid for the match on the 26th of January.