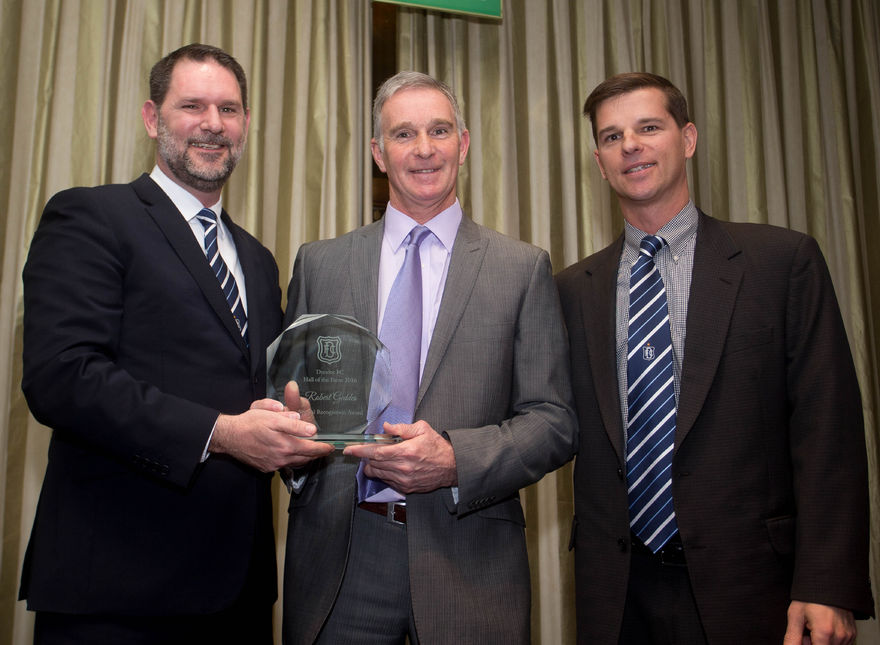 Last Friday Dundee Football Club held their seventh Hall of Fame event and were delighted to induct another six legends to join the 33 installed since 2009. In front of a full house at the Invercarse Hotel, Dundee FC were proud to induct Bobby Geddes, John ‘Sailor’ Hunter, Jimmy Toner, Billy Pirie, Ally Donaldson and Neil McCann into the Club’s Hall of Fame on what was a memorable evening.

First up to be inducted was current goalkeeping coach Bobby Geddes who has served the club with distinction for almost two decades. Geddes is a member of Paul Hartley’s backroom team and is a man who knows Dens Park well having been an excellent and popular goalkeeper for eleven years and the Club felt it only right to induct him into the 2016 Hall of Fame with a new category, a Special Recognition Award.

Rab thought he had been invited to the event to represent the coaching and playing staff who had travelling through to Glasgow for the Scottish Cup tie at Ibrox and had no idea that he was to be inducted himself. With 313 appearances, 97 clean sheets, an appearance in a national cup final, part of a promotion winning side and now passing on his knowledge and experience to the current number ones, Geddes deserves his 2016 Special Recognition Award and was taken by surprise when he was called onto the stage during the introductions to be presented with his award by directors John Nelms and Tim Keyes.

The Heritage Award is designed to acknowledge a former player, manager or Club official who played a significant part in the formation/history of the club pre-1945 and the name John ‘Sailor’ Hunter is known to every Dundee fan as the man who scored the winning goal the only time The Dee have won the Scottish Cup. Not only did ‘Sailor’ score the winning goal in the 1910 Final against Clyde, he scored four goals en route to lifting the trophy, including the winning goal over Hibs in the semi and was part of the side to finish as Scottish League runners-up by one point the year before.

The 2016 Hall of Fame introduced a new category, the Golden Era Award to recognise the successful post-war period in the Club’s history. In the twenty five or so years after the Second World War Dundee FC won the Scottish League Championship, were the first team to win back to back Scottish League Cups, reached two Scottish Cup Finals and another League Cup Final, were League Championship runners-up, won two?Scottish League B Division titles and reached the European Cup and Inter-Cities Fairs Cup semi-finals; it truly was a golden era.??This new award is designed to honour the players whose achievements made it such a special time and the Club were delighted to announce that the first recipient of the Golden Era Award was Jimmy Toner, a member of that wonderful George Anderson side of the early Fifties who won two Scottish League Cups. Dundee were the first side to win back to back League Cups and Toner played in both finals against Rangers and Kilmarnock in 1951 and 1952 in his 71 appearances for the Dark Blues. He is one of only seven players to win two major winners medals with The Dee and returned to coach at Dens between 1966 and 1978.

Unfortunately Jimmy was unable to be there in person to accept his award and instead Club President Pat Liney went on stage to receive it on his behalf, five years after he himself was inducted.

Since the inaugural Hall of Fame the Legends Award has been voted for by the Dundee support and this year was no different. After a choice of six worthy nominees, the fans chose to induct goalkeeping legend Ally Donaldson and goals king Billy Pirie with the 2016 Legends Awards.

Donaldson’s Dundee career spanned 14 years over two spells where he amassed 408 appearances for The Dee. He played in a European semi-final in 1968 and with 126 clean sheets he holds the Club’s clean sheet record and became the fifth goalkeeper to be inducted into the Dundee Hall of Fame after Pat Liney, Bill Brown Julian Speroni and Bobby Geddes.

Billy Pirie was a popular choice to be inducted as fans remembered his 106 goals in 138 appearances, including 44 in season 1976/77 which saw him named Scottish League First Division Player of the Year. Billy found scoring as natural as breathing and it is no surprise that fans who saw him regularly terrorise defences in a Dark Blue shirt in the latter half of the Seventies have voted him into the club’s Hall of Fame with a Legends Award.

Both Ally and Billy, who were team mates at Dundee were in attendance to accept their awards and those present enjoyed listening to them reminisce about their time at Dens on stage.

The final award of the evening was another new category for 2016, the Modern Heroes Award and the presentation to Neil McCann was arguably to the loudest cheer of the night. McCann’s time at Dens at Dens is best remembered for his goal against Airdrie which sent Dundee into the 1995 League Cup Final and his 94th minute goal against Raith in February 2011 when he came out of retirement to help the Club in its hour of need and became a Dee-Fiant hero. Neil’s description of that goal on stage gave everyone in the room goose bumps and his current employers Sky Sports were there to film him receiving his Modern Heroes Award from John Nelms and Tim Keyes.

Superb entertainment from guest speakers John Rowbotham and Dick Campbell capped off a hugely enjoyable night and Dundee Football Club would like to congratulate the six new inductees Bobby Geddes, John Hunter, Jimmy Toner, Billy Pirie, Ally Donaldson and Neil McCann on their entry into the Club’s Hall of Fame.

Profiles from the new inductees as well as every other person in the clubs Hall of Fame can be found by – clicking here.