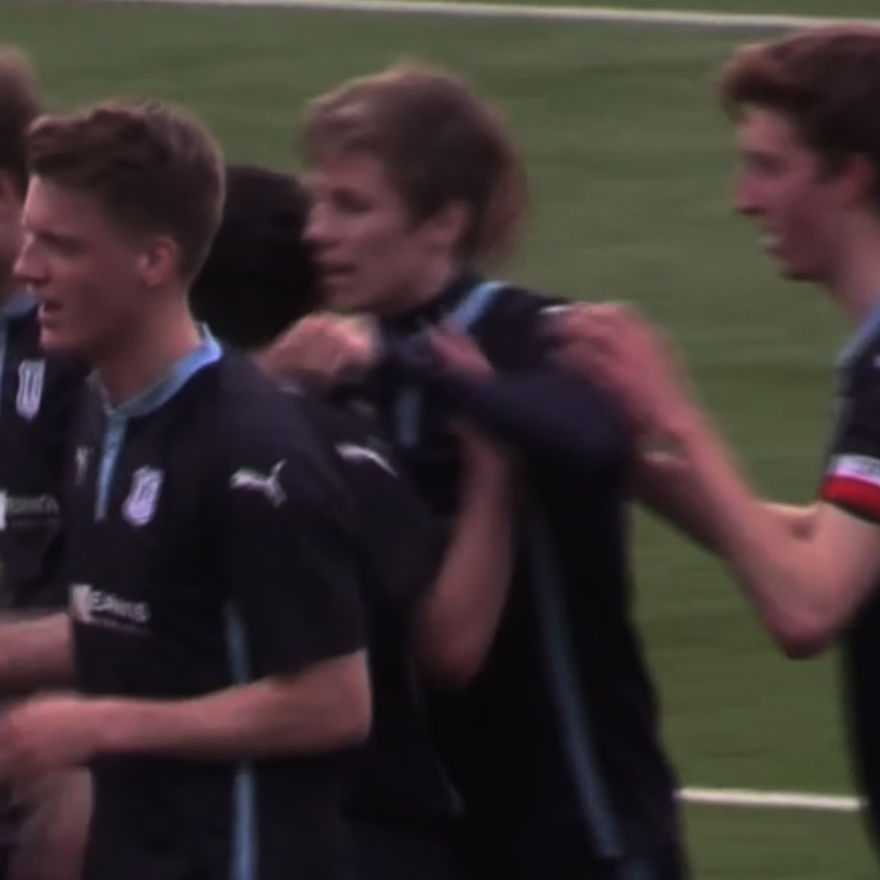 Manager Eddie Johnson made several changes from the team that went down to Aberdeen last week, bringing in Kyle Gourlay, Max Avolio, Greg Warwick and Liam Gibb, with Kerr Waddell also able to return after being injured in the warm-up prior to the Dons match.

Both first team managers, Paul Hartley and Robbie Neilson, were in attendance at Forfar’s Station Park as Dundee started brightly, with an Avolio cross hitting the outside of the visitors’ post.

Another Avolio cross caused panic in the Jambos’ box before eventually being cleared.

Greg Warwick then made a foray upfield to crack in a shot that was well held by Hearts keeper Jack Hamilton.

The Dark Blues were dominating the early stages and deservedly took the lead on 25 minutes through young right back Liam Gibb.

John Black did the spadework before the ball was picked up by Craig Wighton who squared to Gibb on the edge of the penalty area and the full back’s powerful shot beat the Hearts keeper.

The Dark Blues almost increased their lead 10 minutes later when Ryan Gemmell nodded the ball on for Wighton who hit the post.

Hearts had barely threatened Gourlay in the home goal but, two minutes from the break only a timely interception by Ben Priest prevented Jambos skipper Robbie Buchanan getting a shot in on target.

The visitors came close to equalising in the opening minutes of the second half when a wayward back pass by Wighton saw Buchanan burst through on goal but Gourlay was out quickly to tackle the forward on the edge of his area.

Matty Allan then made a good block as Hearts sub Nathan Flanagan tried to find a way through.

The Dens Parkers were soon back on the attack though and Wighton and Black both had shots blocked by the hard pressed Hearts defence.

However, Dundee did go further ahead 12 minutes into the second half. Gemmell picked up the ball just inside his own half and ran 40 yards and when his shot was blocked he played it back to Calvin Colquhoun who gave Hamilton no chance with a fierce drive into the top corner from 25 yards.

Dale Davidson was introduced for Wighton immediately after that goal.
Hearts tried hard to get back into things and Buchanan had a shot saved by Gourlay before Waddell made a tremendous block to deny Gary Oliver.
Twenty minutes from the end Ryan Lamond came on for John Black.

Hearts gave themselves a glimmer of hope with a goal seven minutes from time through substitute Alistair Roy but their chances of snatching a draw faded when Liam Henderson was shown a red card for hauling back Dale Davidson as the Dundee sub broke clear.

This was an impressive win by the young Dees who fielded three under 17s in the back line. They dominated in midfield with Allan, Colquhoun, Gemmell and John Black not allowing Hearts to gain any sort of foothold in the game.