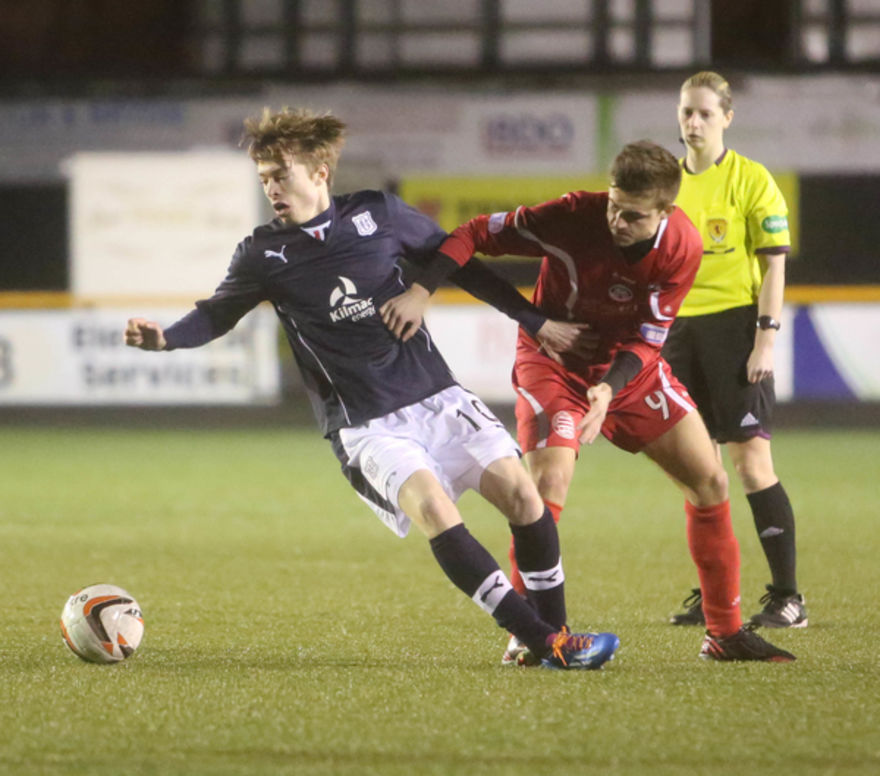 Despite taking an early lead Dundee went down to a battling East Stirlingshire side in this East Section League Cup encounter at Alloa last night.

Craig Wighton got the Dark Blues off to the best possible start with a goal in six minutes. Taking a pass from Calvin Colquhoun the young striker raced from the halfway line and gave the Shire keeper no chance.

They were unlucky not to increase their lead when Scott Mollison’s 30-yard free kick was well saved and from the resulting corner Nicky Riley could only head right at the East Stirling keeper despite being unmarked.

Calvin Colquhoun had a great chance to double the lead when Wighton played him in behind but his shot went inches past the post.

However, Shire grabbed the equaliser eight minutes before the break. A free kick wasn’t cleared by the Dens defence and Reese Devlin produced a fine finish to level the scores at half time.

Before the break there was one final chance for Dundee and it was thanks to more good play from Wighton. He runs ended with him playing the ball across to Colquhoun but the midfielder blasted over.

Wighton almost put his side back in front in the opening minutes of the second half but his shot hit the side netting.

But for a tremendous last ditch tackle, Dundee would have taken the lead again om the 51st minutes, Wighton again the provider. This time Kerr found himself in behind the goalkeeper but a heroic tackle saw his effort behind for a corner.

Just after the hour mark, Davidson was replaced by Ben Sivewright. Christian Nade then saw a rocket shot tipped over the bar by the home keeper.

It was the striker’s last action as Connor Macleod came on for him after 68 minutes.

East Stirling began to come more into the game and on 75 minutes they scored what proved to be the winner. Dan Twardzik saved the first effort but an East Stirling man was on hand to net the rebound.