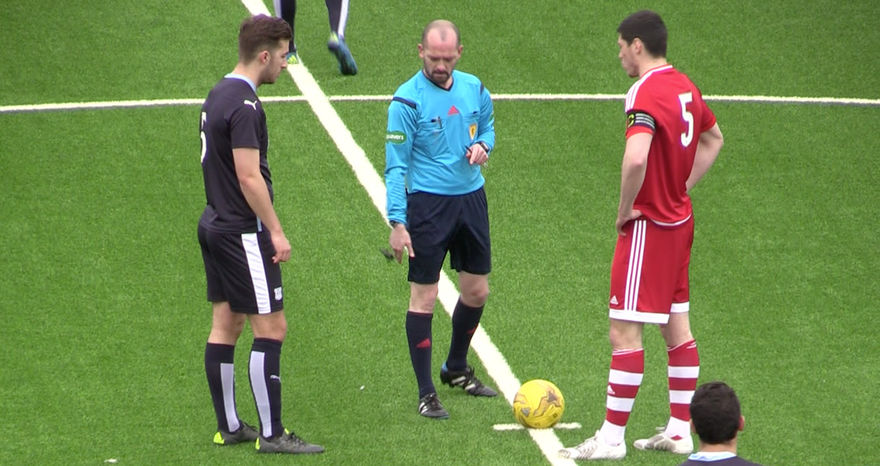 The young Dark Blues were playing their first game in a month and the rust showed early on. David Mitchell had to look lively to block Aaron Norris’s effort.

However, he was beaten in the fifth minute when the Dens defence switched off at a throw-in, allowing a cross into the box from which the Pittodrie side’s trialist nipped in at the near post to score.

It was almost two in the twelfth minute when Danny Harvie’s header hit the post and Mitchell was relieved to gather the ball safely.

At the other end skipper Ben Priest created a chance for John Black but the midfielder’s shot was a weak one and Dons keeper Aaron Lennox saved easily.

A slack backpass let in Dundee’s on-loan Spanish striker Arturo but Lennox was quickly off his line to smother the danger.

The Dons could have extended their lead on the half hour mark with Harvie heading wide from a good position. Then Bruce Anderson brought out a fingertip save from Mitchell with another header.

The visitors had had the better of the first half but Dundee could have gone in level at the break. Kerr Waddell’s header found Arturo six yards out but the keeper saved the striker’s effort.

The Dark Blues upped their game in the second period and took control of the midfield, though it took an extraordinary miss from Aberdeen’s trialist striker to prevent them falling two behind. His close range header somehow missed the target and Dundee breathed again.

Ryan Gemmell had a great chance to tie things up but he managed to send his shot the wrong side of the post after good work down the right by Andy Black.

Kyle Clark came on for Darryll Meggatt as the Dens men increased their attacking options. They had a genuine penalty claim when Gemmell was hauled back inside the box but the referee didn’t want to know.

Andy Black’s forays down the right led to him hitting the top of the net and setting up a chance for John Black which also went over.

However, a minute from the end of normal time the home side deservedly equalised with a similar move to the opening goal. A Sam Dryden throw-in was missed by the Dons defence and Clark raced in at the far post to thunder the ball into the roof of the net.