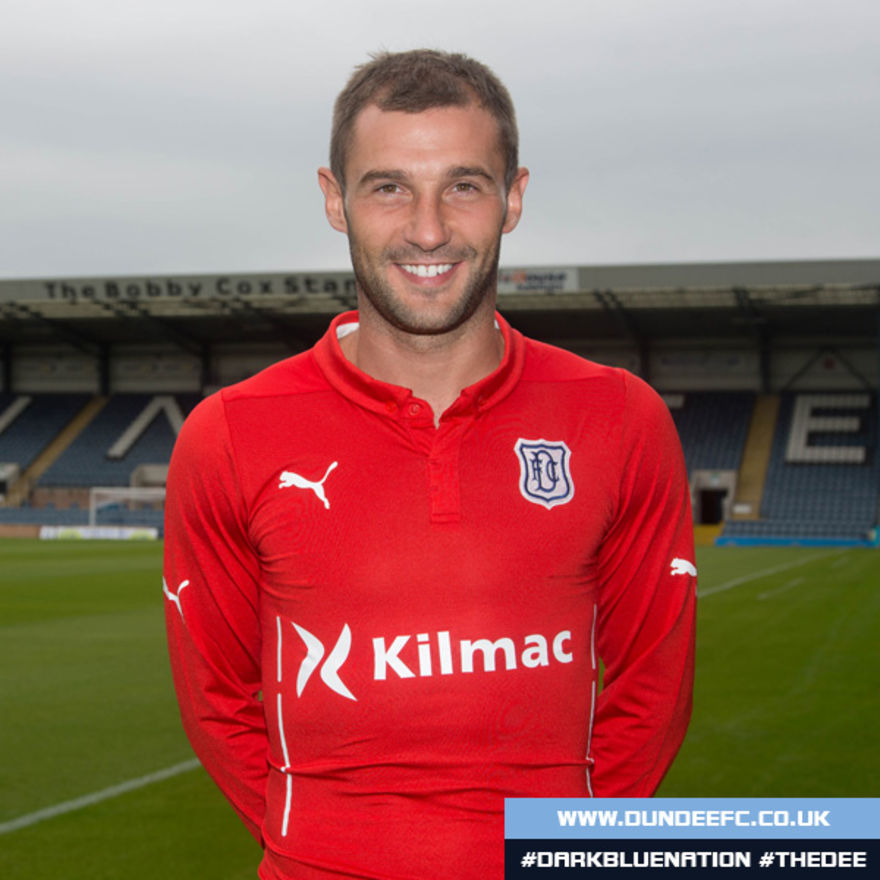 Captain Kevin Thomson modelled the red shirt which Dundee will wear throughout pre-season for us at Dens Park this afternoon. We took the opportunity to catch up with the midfielder ahead of the matches getting underway.

The squad returned from a week long training camp in Hungary on Thursday and Kevin told us of the trip, “It was good, really good. Really enjoyed it, it was a hard week.”

The pre-season kit which will be worn for the first time against Manchester City on Sunday has a skin tight shirt and Kevin joked that the fitness work in Hungary has helped ahead of the team wearing it, “Tam (Ritchie) put us through our paces so I’m in alright nick to wear this.”

He went on to say, “Weather was great, facilities were great and I think it was a clever move from the manager, taking a new group of boys away for a week and allowing us to bond and train together and get to know each other. Hopefully it’ll stand us in good stead.”

Manager Paul Hartley said that one of the purposes of the trip was to bond the squad together, the captain told us, “I know it sounds a bit patronising and disrespectful but you don’t know boys names. So getting to know people, what they are like, even playing with together, you are playing with different players you’ve never played with before. You don’t know where people want you to pass the ball and things like that. To be intense and to be on each others toes for a week was great.

Kevin reported back to pre-season training a few days after the squad, but he insisted he didn’t really have to play catch up with the rest of the players, “I was a wee bit but I always look after myself, I’m always in alright nick. The gaffers been looking after us which is great. Obviously the boys finished earlier than me so although I’ve had a bit of stick about it I’ve put my own fight up to say that I’m not getting any younger and the extra couple of days was nice.”

English Champions Manchester City provide the first test and it’s a match which Kevin is looking forward to, “Playing against the best players, we’ll certainly not be judged on tomorrow’s game, it’s about getting some miles in the legs. Trying to find a formula and a formation that will suit us. We’re not going to play against the world’s best players every week and we know that.”

“It’s a great test, it’s one we look forward to and fingers crossed we can put on a good show for the fans.”

Kevin is wearing the red kit which is emblazoned with the Kilmac logo. The club directors said in a statement when announcing the new sponsorship deal with Hangar Records, “In recognition of our past, present and continuing relationship with KILMAC, we have commissioned a special RED strip emblazoned with the new Kilmac logo to be used in our 4 upcoming friendly games, after which our new sponsor joins the club”