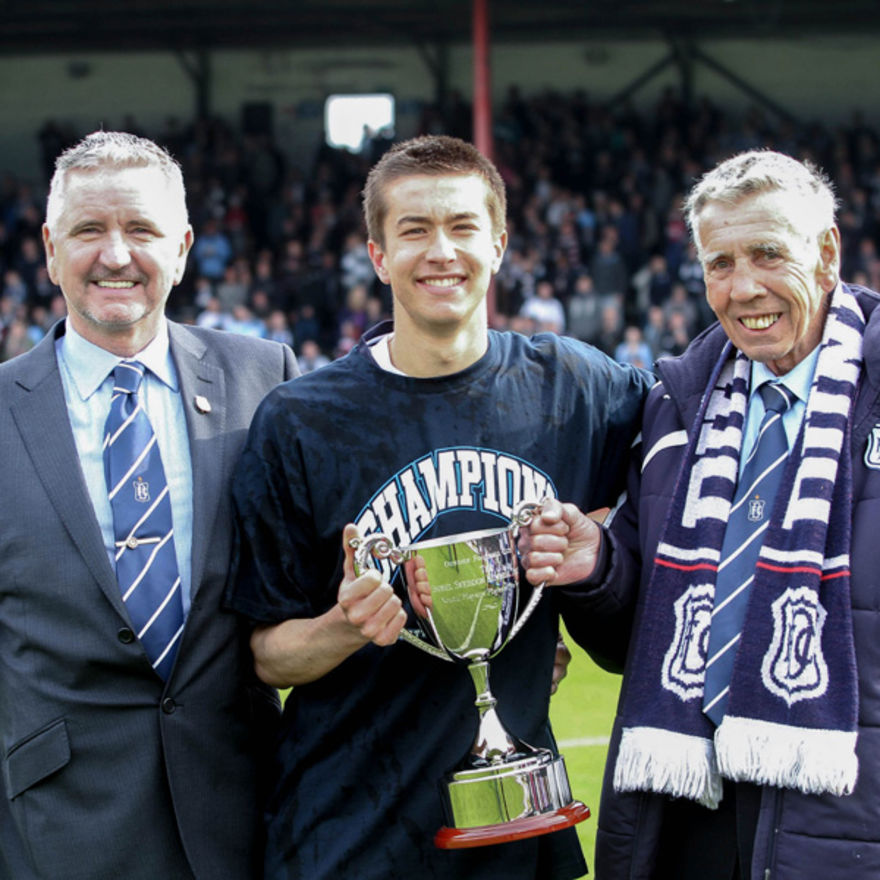 Moments before the side were presented with the SPFL Championship trophy on Saturday, board member Steve Martin and Club President Pat Liney presented Cammy Kerr with the inaugural Isobel Sneddon Memorial Trophy for Youth Player’s Player of the Year.

Right back Cammy was a regular for the Reserve side throughout the year and ended the season by captaining Gavin Rae’s team on a number of occasions.

A consistent performer, Cammy impressed throughout the season and his fine form was rewarded when he made his first team debut at Dens against Livingston in January. Then boss John Brown brought him on with ten minutes remaining.

Suspension for regular first team right back Gary Irvine at a vital time in the season saw the door open again for Cammy to make his first start for the club in April. New boss Paul Hartley put his faith in him and he didn’t disappoint putting in a fine performance and Dundee saw off Cowdenbeath with a 4-0 win at Dens.

The manager told the press following Cammy’s first 90 mins for the club, “I thought he was excellent. His enthusiasm was good. He’s trained well all week, that’s the reason he was in the team. I thought he gave it everything and his quality on the ball was good. He got up and down and defended well. He’s still young so I was really pleased with him.”

The following week, Cammy kept his place in the team and despite Dundee dominating the match at Morton, in which Cammy was provider to a number of fine opportunities, the match ended 1-0 to the Cappielow side.

The Isobel Sneddon Memorial Trophy was introduced this season and Cammy is a worthy winner of the award.