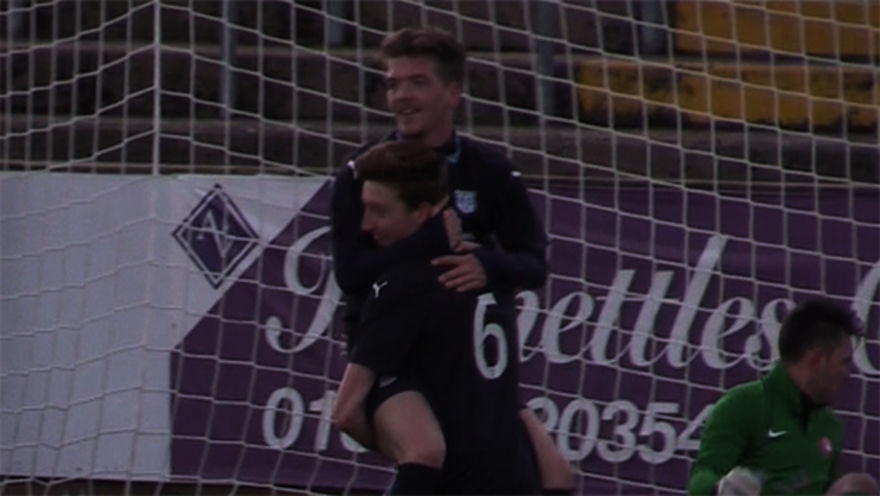 A windy Station Park was the venue as Dundee took on league pacesetters Hamilton Accies. Although recently overtaken by Aberdeen at the top of the Development League, Accies have been a force in this competition and the young Dark Blues knew they would have to battle to get something from this game.

The visitors put Dundee under pressure right from the off and Eamonn Brophy blasted over from close range in the third minute.

Then Danny Redmond twisted and turned inside the box and only a great block by Andy Black prevented the striker from scoring.

Brophy again had a chance to give Accies the lead but he was denied by the outstretched leg of Kyle Gourlay.

On 12 minutes Hamilton took the lead. Greg Docherty’s initial effort was blocked but the ball fell to Danny Armstrong who netted from close range.
Andy Black had to come to his side’s rescue again, forcing the ball out for a corner and denying Redmond once again.
Even with the wind at their backs Dundee were struggling to create anything but that changed when Craig Wighton latched on to a through ball from Kerr Waddell and forced a terrific save from Accies keeper Darren Hill.

Waddell was adjudged to have fouled Brophy and was booked and from the free kick Jesus Garcia Tena’s shot rattled Gourlay’s left hand post.

Three minutes from the break Dundee were awarded a free kick out on the right and when Cameron’s delivery came into the box there was Colquhoun to knock the ball home.

With the wind now at their backs Hamilton stepped up the pressure and, in the first minute Gourlay had to be alert to a Brophy header and the keeper did even better with a terrific save from Brophy’s 25-yard free kick.

Coach Gerry Creaney sent on Ryan Gemmell for John Black on the hour mark and five minutes later, the Dark Blues had a great chance to take the lead, Wighton racing on to Cameron’s flick, but putting the ball agonisingly past Hill’s left hand post.

Dundee were coping well with Hamilton and with the wind now and Colquhoun had a free kick which went narrowly wide.

However, they were nearly caught out when Darren Lyon found space inside the box to fire in a point blank header straight at Gourlay.

Eleven minutes from the end the home side went in front when Waddell’s pass to Josh Skelly was helped by Priest into the path of Wighton and his cross was headed home by Cameron who was lurking at the far post.

Four minutes from time the points were made safe when, from a Matty Allan free kick, Skelly skinned substitute Brian Reilly down the left and crossed for Cameron who swept the ball into the net.

Dundee made a double substitution, bringing on Max Avolio and Calum McHardy for Skelly and Cameron. There was still time for Craig Watson to fire in a header but Gourlay got down well to clutch it on the line.