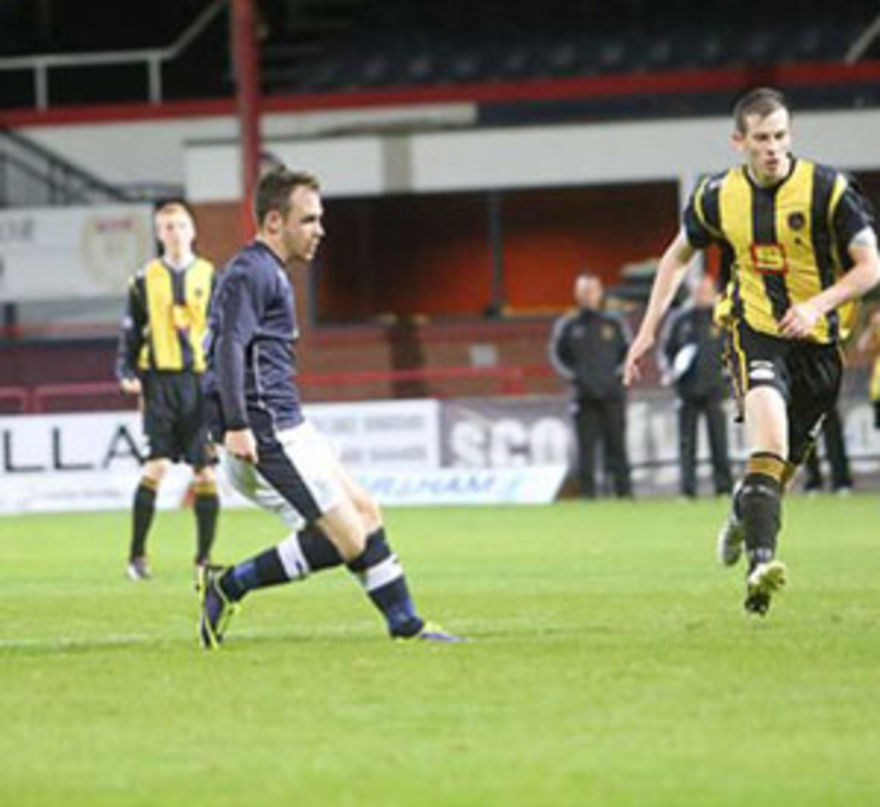 Dens Park witnessed one of its fastest-ever goals in this Reserve League match between Dundee and Berwick Rangers on Monday night.

There were only NINE seconds on the clock when Steven Doris raced on to a Cammy Kerr through ball and sent his shot past Berwick keeper Billy Bald and into the net.

The visitors, who had arrived late at the ground due to traffic problems, were caught completely cold and found themselves two down only three minutes later.

Although Bald blocked Craig Wighton’s shot, the ball rebounded to Matty Allan who stabbed it home from close range.

Wighton then tried a 25-yarder which only just cleared the bar and Jamie Reid tested Bald with a shot that the keeper did well to turn round the post for a corner.

But, on 13 minutes the keeper was beaten again as Martin Boyle fed Wighton on the edge of the visitors’ box and the young striker’s low shot went in at the far corner.

Two minutes later Wighton made it four with a spectacular shot from the edge of the box into the top corner of the net.

Berwick were stunned by this early blitz but they responded with a dangerous cross from Owen Ronald which only just missed connecting with the head of Josh Morris on Dan Twardzik’s goalline.

Dundee suffered a blow when Reid, who had been prominent in their attacks, was forced off through injury, his place being taken by Calvin Colquhoun.

On 37 minutes Berwick pulled a goal back when Dean Carse held off Kerr, cut inside from the wing and unleashed a fierce shot past Twardzik.

The Dens men almost increased their lead a minute later but Carlo Monti’s 25-yard free kick crashed off the post. On the stroke of half time Boyle, who was causing the Berwick defence all sorts of problems with his pace, also hit the post with another long range effort.

The start of the second half proved a more even affair, with Berwick at last showing some fight and a dangerous cross from Morris was cleared from the danger area by Kerr. The visitors should perhaps have reduced the leeway when Greig Tulloch just failed to get on the end of a Ronald cross.

Doris picked up a knock and was replaced on 66 minutes by young Max Avolio.

A minute later Thomas Carberry had a goalbound shot deflected behind and from Kerr’s corner Monti’s header was tipped onto the bar by Bald.

Fourteen minutes from time Monti got his reward when he worked a one-two with Wighton before dispatching the ball past Bald from 12 yards.

Dundee thought they’d got a sixth when Carberry’s shot came back off a post to Monti who drilled it home but the linesman’s flag was up for offside.

However, Monti was not to be denied and, seven minutes from time he got his second with a delicate chip over the keeper from the angle of the box.

The striker picked up a knock and was replaced in the dying minutes by Ben Sivewright but there was still time for one more goal and it went to the visitors when Berwick’s Tulloch took advantage of a defensive mistake to run through and score.