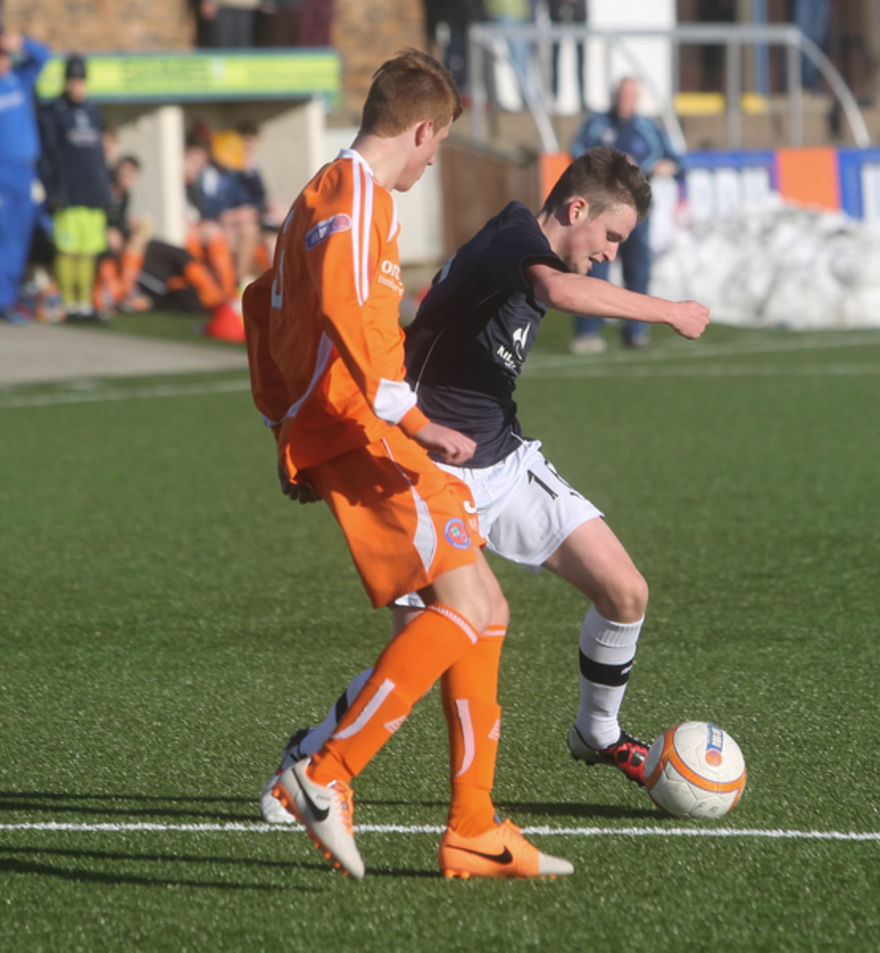 With the two previous games between the sides yielding 19 goals this promised to be another goalfest, especially when Forfar’s Cammy Clark netted in the first minute. A ball driven across the face of the Dundee goal was tapped home by the striker, who netted four times in the last game against Dundee and once in the game before that.

Forfar were badly hit by injuries and could only name two substitutes whilst the Dark Blues fielded a mainly under 17 line-up.

Dundee were forced to give up home advantage in this League Cup sectional tie, but they looked comfortable on the artificial surface and levelled on 10 minutes when Josh Skelly latched on to a through ball from Sean Gallacher, and, following a fortuitous break of the ball, guided the ball past Forfar keeper Leighton Davidson.

Two dangerous Calum McHardy free kicks with the wind behind him forced Davidson into good saves to keep the score level.

Dundee’s Max Avolio and McHardy both picked up bookings, McHardy’s one looking extremely harsh. Ex-Dee Craig Smith picked up a nasty knock in a strong, but fair challenge, and was eventually forced off, being replaced by Rudi Brown.

It was Paul McLellan’s turn to go into the ref’s notebook when he ignored an offside whistle to slam the ball into the Dundee net.
Substitute Brown almost gave the Loons the lead again but his effort was saved by the legs of Dee keeper John Bonnar.

Five minutes from the break the Dark Blues took the lead. McHardy was the creator, chipping the ball over the defence to Avolio who brought it down and slipped it to Skelly who gave Davidson no chance from a tight angle.

Forfar, with the wind at their backs surged forward and Bonnar had to scramble away a Clark shot, but four minutes in the Dens men increased their lead, skipper John Black wheeling on the edge of the box and sending an unsaveable shot past Davidson.

Sam McGregor was next in the book for a foul on Cammy Black and he was subbed on 62 minutes by another ex-Dee Chris Snee.
Dundee were under pressure now but the back four of Greg Warwick, Cammy Black, Jack Neave and Liam Gibb was coping well.

On 68 minutes coach Gavin Burns sent on Robbie Casey for Matty Davidson. Two minutes later Cammy Black made a timely interception when he tackled McLellan as he was about to pull the trigger.
Gibb then came to Dundee’s rescue when he headed away a dangerous cross from the left.

The Sky Blues lost their composure for a spell, with Gavin Thomson being booked for dissent and their coach ‘asked to leave the technical area’.

The Loons reduced the deficit through a powerful Clark shot six minutes from time as the striker continued his rich vein of scoring against the Dark Blues.

Dundee then introduced Dale Davidson for the hard working McHardy.
As the Station Park side pushed for the equaliser Thomson was ordered off for a dig at Neave.

Scott Milne came on for Skelly and the Dark Blues still had to endure a few nervous moments as the clock ticked down. Warwick headed the ball clear of his goal line and Bonnar had to look lively to grab a goal-bound header.