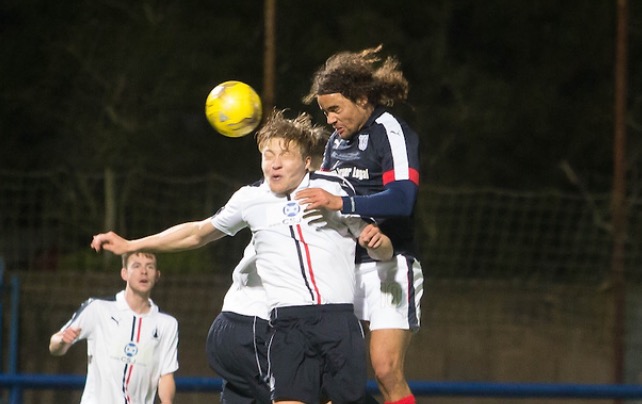 Dundee were held by Falkirk in the Development League. The Dark Blues were looking to build on last week’s 4-1 victory against St Mirren, and named a strong starting 11 that featured the likes of Nicky Low and Faissal El Bakhtaoui. Despite the strong line up, neither the Dees or the Bairns could break the deadlock as the game ended 0-0.

Ian Smith saw his effort from 25 yards out narrowly miss the net before Falkirk’s Nathan Austin brought a good save out of Kyle Gourlay. Nicky Low’s quick free kick found Faissal El Bakhtaoui after 17 minutes, but the striker was denied by Falkirk keeper Deniz Mehmet.

Mehmet was called into action six minutes later to deny Yordi Teijsse. The Dutchman got on the end of Conor Quigley’s cross, but saw his looping header clawed away from the top corner by Mehmet.

Teijsse was again denied by Mehmet midway through the second half. The Falkirk keeper got down well to keep out Teijsse’s snap shot.

Falkirk looked dangerous through set pieces and nearly opened the scoring with 14 minutes remaining. Peter Grant got on the end of Conor Laighton’s free kick, but couldn’t keep his effort on target.

Kyle Gourlay had been largely untroubled during the game, but produced a fine stop after 81 minutes. Kevin O’Hara managed to create space inside the Dundee penalty area but his shot was well saved by Gourlay.

As the game entered injury time, Dundee had a golden chance to take all three points. Jesse Curran’s cross landed at the feet of Ian Smith, but the winger failed to react as the ball was cleared by the Falkirk defender, ensuring both teams took a point from an entertaining match.