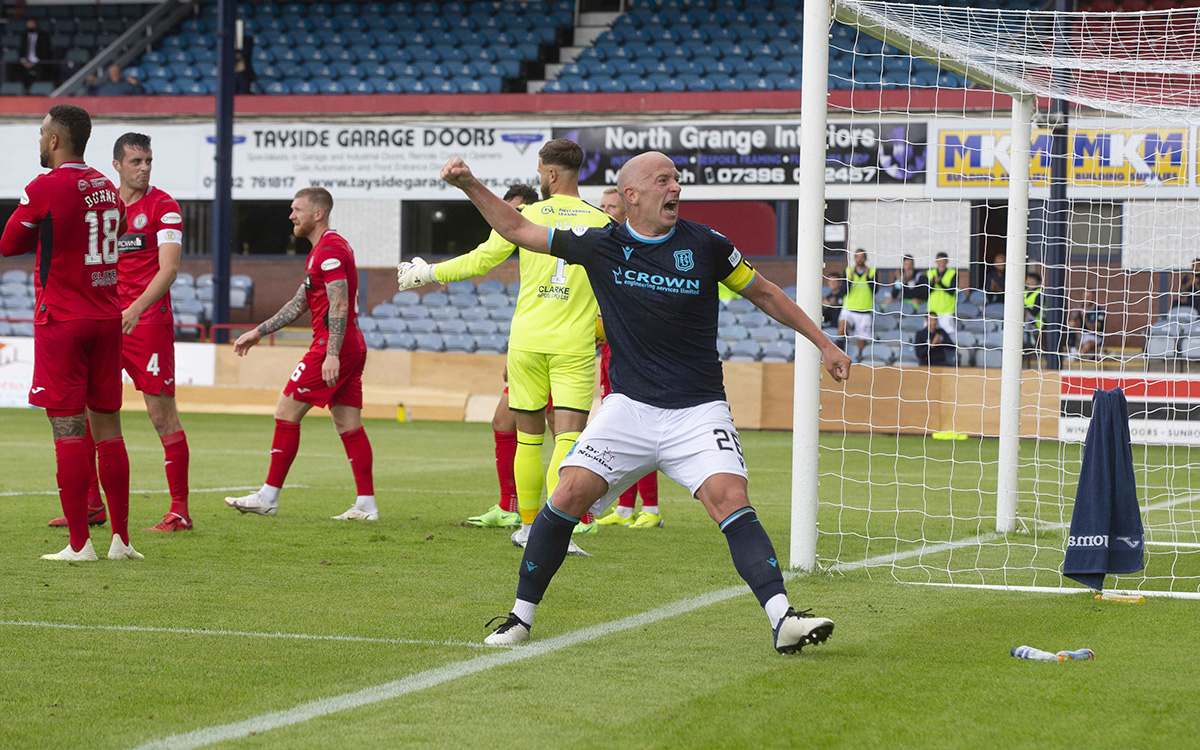 Dundee returned to the Premiership with a 2-2 draw against St Mirren at the Kilmac Stadium. The Dark Blues had to come from behind twice. Eamonn Brophy gave the Buddies an early lead but Joe Shaughnessy headed into his own goal just before half time. After Jamie McGrath put St Mirren ahead again from a controversial penalty Dundee fought back with an equaliser from Jason Cummings. The Dee showed great spirit to cope with the loss of Danny Mullen and Christie Elliot through injury in the first half and Max Anderson’s red card midway through the second half.

The Dark Blues made three changes from last week’s defeat of Forfar. Jordan Marshall, Jordan McGhee and Paul McGowan returned to the starting line-up with Corey Panter and Jason Cummings moving onto the bench and Liam Fontaine missing out. McGhee played at centre back instead of taking up his normal midfield spot.

Dundee started promisingly and Paul McGowan had a shot deflected over the bar after just 45 seconds following good work on the right by Max Anderson.

St Mirren responded with a swift reminder that any slackness will be punished in the Premiership. A goal kick by Jak Alnwick was launched up the park and Curtis Main glanced it on for Eamonn BROPHY. The Buddies striker took a touch before drilling his shot from 18 yards inside Adam Legzdins’ right hand post. Dundee might have been rather casual but it was a fine finish.

The afternoon soon turned even worse for the Dee when Danny Mullen landed badly after an aerial challenge. He required lengthy treatment before being stretchered off. Jason Cummings took his place.

St Mirren looked dangerous, especially on the break, and Adam Legzdins saved well with his legs from Curtis Main after a fast Buddies move down the left. Christie Elliott then cleared a corner over his own bar.

Dundee were attacking at every opportunity and regularly found space behind St Mirren’s wing backs. Jason Cummings took a pass from Paul McMullan and Saints keeper Jak Alnwick had to push the shot round his post.

Legzdins saved well again when Brophy shot from the edge of the penalty area. But as the first half moved towards its conclusion the Dark Blues took the game to St Mirren ramped up the pressure on the away defence.

Dundee had to cope with another enforced change when Christie Elliott limped off and was replaced by Ryan Sweeney who went into central defence with Jordan McGhee moving to right back.

Dundee won a succession of corners with Charlie Adam putting in dangerous deliveries from the right with Paul McMullan equally threatening from the left. After 44 minutes St Mirren finally buckled under the pressure and a McMullan corner to the back post was inadvertently headed into his own goal by Joe SHAUGHNESSY, under pressure from Charlie Adam.

In first half injury time St Mirren managed to break clear with the ever dangerous McGrath heading down the right and passing inside for Main to shoot into the side netting.

The second half began just as badly for the Dee as the first, but the circumstances were very different. Jason Cummings was back defending at a St Mirren corner, and was judged by referee Craig Napier to have brought Jay Henderson down illegally.

It looked a dubious decision and the Dee striker was furious with the award. After a lengthy delay Jamie McGRATH scored from the spot.

Dundee responded strongly and took only five minutes to equalise with a superb move. Max Anderson played a marvellous ball down the left which was perfectly weighted for Jordan Marshall. The full back whipped in a first time low cross on the run and Jason CUMMINGS swept home the goal from 12 yards.

Cillian Sheridan had replaced Fin Robertson after the St Mirren penalty and he set up Cummings to run in from the right, only to finish with a weak shot.

The Dark Blues were starting to build some momentum when the game swung decisively in St Mirren’s favour with a red card for Max Anderson. Brophy broke from a Dundee corner, and Anderson scythed him down from behind midway inside the Buddies’ half. The ball was well out of his reach and the referee interpreted the challenge as serious foul play rather than an attempted tackle. The young midfielder had been outstanding until his afternoon ended with that poorly judged foul.

Anderson’s departure left the Dee without both of the energetic youngsters in midfield. Paul McGowan and Paul McMullan joined Charlie Adam in the improvised midfield, but McMullan being pulled inside gave St Mirren’s wing back Tanser a worrying amount of space on the Dee right.

St Mirren took charge and the last 25 minutes were simply a matter of the Dee hanging on under constant St Mirren pressure.

The Dark Blues’ defence stood up well to the assault and Legzdins had to make only one serious save. A McGrath cross found Tanser only six yards out, but his header was far too close to the Dee keeper who made a terrific reflex save.

Tanser was taking advantage of the extra space on his flank to put in some dangerous crosses. One low ball flew through the goalmouth with Main and substitute Dennis both unable to reach it.

Dundee struggled to get out of their own half, but spirited, and well organised defending kept the Buddies at bay. Despite all the pressure St Mirren could not create a real chance in the last 15 minutes and Dundee hung on to earn the draw.

The Dark Blues had to overcome some disappointing setbacks to take the point they deserved. The first half injuries not only disrupted the team they restricted the opportunity to make changes in the second half.

In addition to these unfortunate injuries Dundee had to do without a few players who might well have started the match if they had been available. They still managed to play some good, attacking football and were resolute in defence, especially during the second half.

If today’s game was a good indicator then Dundee fans are going to see plenty of entertainment this season, and full-hearted committment from the men in dark blue.

Sent off: Anderson (foul on Brophy).