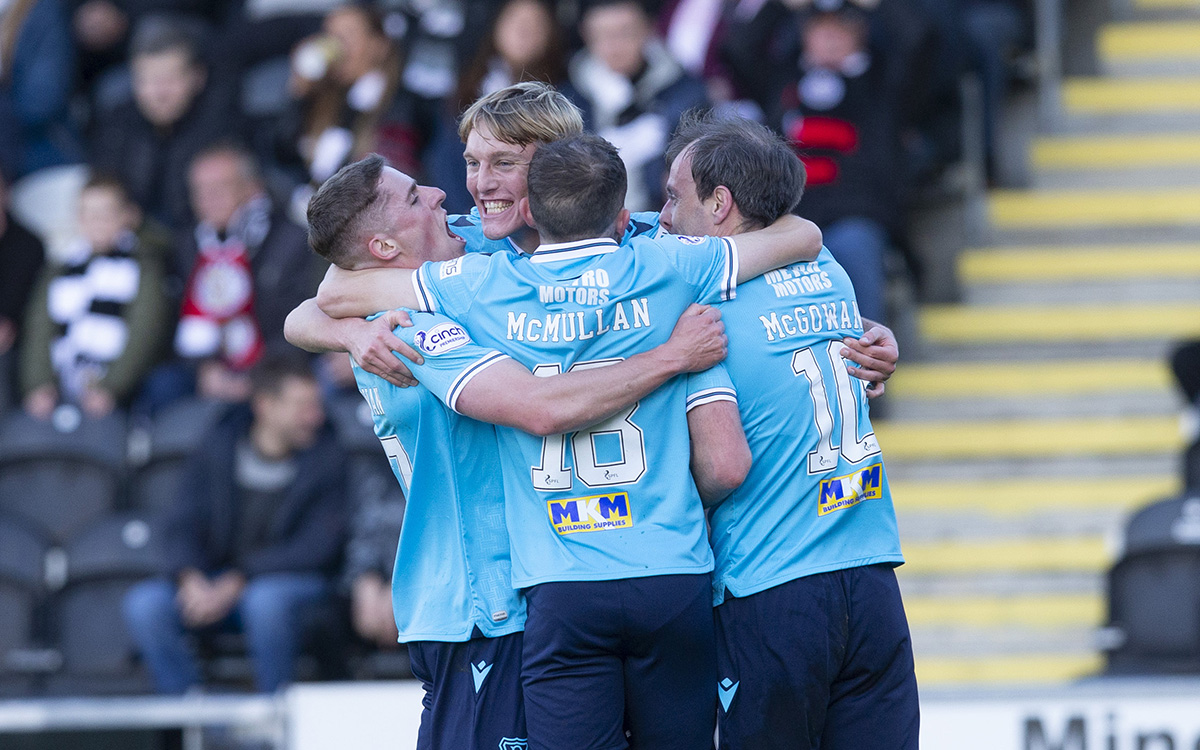 The Dark Blues provided the perfect response to Wednesday night with three points and a clean sheet in Paisley. Max Anderson’s early goal proved to be the winner. Dundee were composed and determined as they held St Mirren at bay and always looked capable of adding to their lead. The Dee were given tremendous backing throughout by a noisy and passionate travelling support who were delighted with the commitment shown by the team – and by the well merited victory.

James McPake made three changes from the Ross County defeat. Max Anderson, Luke McCowan and Cillian Sheridan started, replacing Jordan McGhee, Leigh Griffiths and Jason Cummings, who were all on the bench.

After a very quiet first few minutes the Buddies had the first effort on goal. Curtis Main got on the end of a deep free kick beyond the far post but Adam Legzdins saved well. That was the last header or shot St Mirren had on target in the first half as Dundee handled the home side’s attacking impressively.

The Dee were dangerous on the break and took the lead with a fast attack after 11 minutes. Paul McMullan and Luke McCowan created space for Charlie Adam to swing a cross into the penalty area. Nobody won it cleanly and McMullan laid the ball off for Max ANDERSON to calmly place his sidefooted finish into the corner of the net from 20 yards.

Dundee should have had a second goal a minute later. Paul McGowan had space on the left of the penalty area. His shot was blocked but he dragged the ball clear of the keeper and cut a pass into the goalmouth. Somehow St Mirren escaped as the ball bobbled around on the goalline before being cleared.

Legzdins only save of the half was from a Brophy shot that was heading wide anyway. The Buddies set up some promising attacks but they all fell away when they reached the final third. T

Dundee’s formation was highly effective with Cillian Sheridan doing a fine job as a target man, keeping the Buddies’ central defenders busy and holding up the ball for Dees breaking forward. The wide players, Paul McMullan and Luke McCowan, were able to find plenty of space. Paul McGowan the most advanced midfielder was involved constantly, while Anderson and Adam complimented each other in midfield with their controlled mix of passing and running.

St Mirren came out for the second half determined to break back into the game. Curtis Main volleyed over from Scott Tanser’s cross. Eamonn Brophy went down in the penalty area, but the referee decided that he had slipped rather been tripped. After that burst the Buddies struggled to get through the Dee defence and trouble Legzdins.

Dundee lost Cillian Sheridan early in the second half. Jak Alnwick came a long way from his goal to knock the ball out for a throw. McCowan took it quickly to Sheridan, with the keeper still a long way out of position. As Sheridan turned to shoot he crumpled, clearly in great pain. After lengthy treatment he was carried off on a stretcher with Danny Mullen replacing him.

Mullen could not offer the aerial strength of Sheridan but his non-stop work, his constant harrying and aggression made it harder for St Mirren to build from the back and the Buddies kept on giving the ball away as they tried to start moves. Dundee had their own half-hearted penalty claim when McMullan went down after St Mirren lost possession playing out from the back against Dee pressing. Again the referee was not persuaded.

Dundee threatened repeatedly on the break. At the end of a good move McMullan sent a cross beyond the far post and Mullen headed back into the danger area with nobody able to profit.

St Mirren’s final effort was no more than a half chance as Tanser connected cleanly with an angled half volley from 15 yards, but Legzdins held the ball confidently.

Jordan McGhee came on for Max Anderson and late on Christie Elliott replaced Paul McGowan. The Dee did an excellent job keeping play away from their penalty area in the last few minutes of normal time and the seven minutes of injury time. Deep in injury time Elliott showed neat footwork to break past two defenders into the penalty area and his cross shot took a deflection for a corner.

In the last few seconds McMullan had the chance to run for goal, but killed the game by heading for the corner flag and St Mirren were still stuck down there at the end. The travelling support had been noisy throughout and stepped up the volume in injury time. At the final whistle the singing and cheering went up another level and there is no doubt that the fantastic Dee support played their full part in this win, backing the players to the hilt and enjoying the win enormously.

Everything about this afternoon in Paisley was so different from Wednesday night. The formation and tactics worked a treat. The shape was always good and the team was a solid unit. The defence was determined to earn their priceless clean sheet. The midfield did their part too with the hard work, chasing and tackling, and were more composed and creative in possession than the Buddies. The wide players were tireless, tracking back and always offering dangerous options when the Dee attacked. This was the Dee we want to see, and it was a pleasure for all Dees to watch it.

Attendance: to be announced.