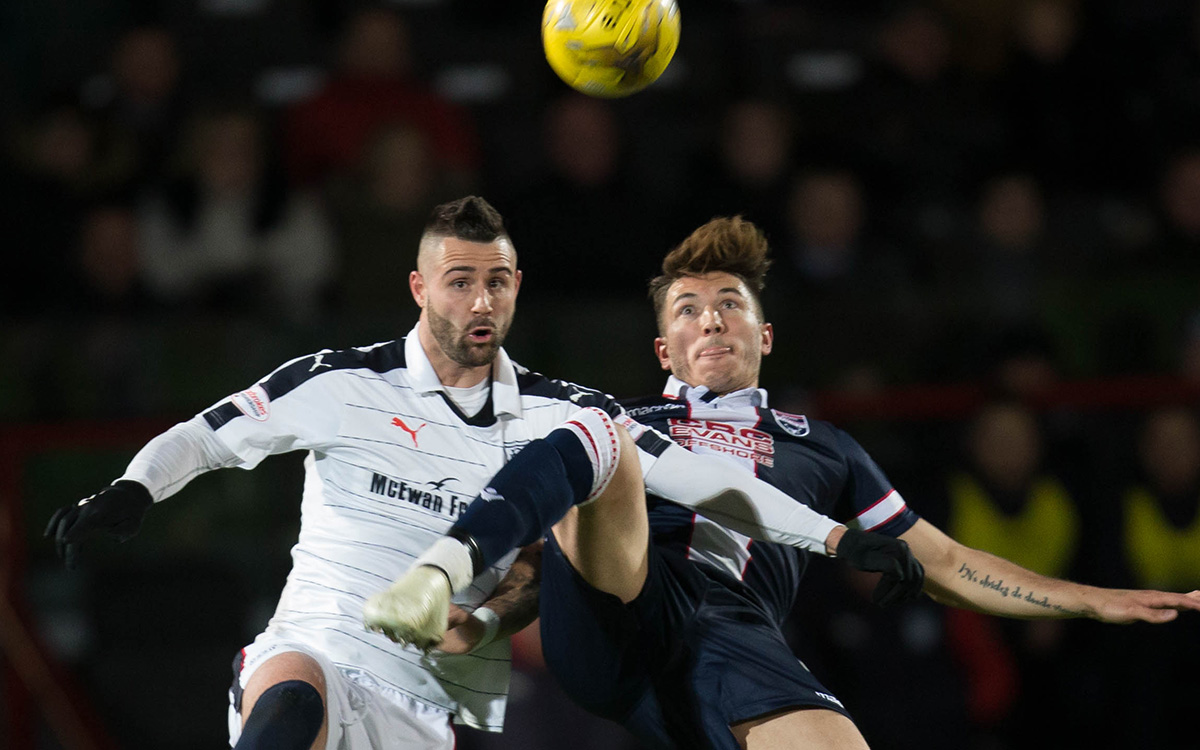 Dundee lost out at the death in Dingwall tonight as Ross County won 2-1 with a Liam Boyce penalty after 89 minutes. Tim Chow gave the Staggies an early lead, but a Darren O’Dea penalty brought the Dee level at the end of the first half.

The Dark Blues had a strong, cold wind at their backs in the first half, but it was County who showed the greater early threat. The Staggies took the lead after only six minutes with a fast break out of defence. Jim O’Brien sent Liam Boyce clear on the left. Kevin Gomis got back to cover, but couldn’t stop Boyce’s low cutback for Tim CHOW to sweep the ball home from 10 yards.

Dundee responded well and Darren O’Dea went close with a glancing header from Paul McGowan’s free kick. Scott Fox might have had that one covered, but minutes later he certainly had to be at his best to keep out a ferocious rising 25 yard shot from Mark O’Hara that was heading for the top corner.

The game was badly disrupted by a series of injuries that kept both physios busy. Mark O’Hara and Scott Bain both needed lengthy treatment, but it was County who suffered worse. They lost midfielder Martin Woods and their centre back and captain Andrew Davies.

The game took a long time to recover from the delays. The Staggies had been the more fluent side, but they now lost some of their composure in midfield. Dundee meanwhile had never really got going although they were always competitive.

Late in the first half the wind intervened causing problems to both defences in turn. Danny Williams and Scott Bain got in a tangle dealing with a high swirling ball. Liam Boyce backtracked to retrieve the loose ball and tried to lob Bain from 30 yards, but miscued his shot.

County weren’t so fortunate when Jay McEveley misjudged a long through ball, allowing Marcus Haber to send Henrik Ojamaa clear with a flick. Marcus Fraser’s clumsy challenge downed Ojamaa as he was about to shoot, and Darren O’DEA blasted the resulting penalty high into the net.

There were still six minutes of injury time to be played, and the Dark Blues needed a brilliant save by Scott Bain to reach half time on level terms. Liam Boyce’s powerful close range header following a short corner looked a certain goal, but the Dee keeper managed to push the ball onto the crossbar and the Dark Blues escaped.

The quality of the football failed to improve after the break. Neither side was able to settle on the ball and control play. Dundee struggled to hold onto possession, and County were too often rushing their approach play as they frantically chased a goal.

County were guilty of some wild shooting, but Liam Boyce went close with a glancing header. Gradually the Staggies built up a head of steam and started to fire dangerous balls into the penalty area. Jason Naismith went closest, blasting a half chance over the bar after Boyce had set him up.

If Dundee were struggling to prevent County getting the ball into the penalty area they were at least defending well in the box. The big talking points of the last 10 minutes were all about penalty claims. First, County claimed that Paul McGowan had used a hand to intercept a through ball. Then Jim O’Brien went down when he and Scott Bain challenged for a low cross. O’Brien had already been booked and when the referee, Mr Beaton, decided that he was guilty of simulation he picked up a second yellow and a red card.

With 10 minutes to go Dundee started to dominate in midfield and looked capable of going on to win a game in which they had played with plenty of determination, but little fluency. However, after 89 minutes the Dee defence failed to clear a cross and in the resulting scramble Mr Beaton decided that Mark O’Hara had fouled Michael Gardyne. Liam BOYCE sent Scott Bain the wrong way to score from the penalty spot.

There was only a minute of injury time, and when Dundee won a free kick on the half way line everyone went forward. There was another scramble in the packed penalty area and Mark O’Hara hit the turf. Mr Beaton decided again that this was simulation and booked the Dee midfielder, though the claim looked every bit as convincing as the penalty awarded to the Staggies. A mass scrum of pushing and shoving followed, which saw Craig Curran and Danny Williams booked. Williams had already seen a yellow card and he was sent off, only a few seconds before the final whistle sounded.

After Friday night this was a performance that had plenty of spirit and determination, but Dundee couldn’t summon up the quality they needed in difficult conditions. It looked like the Dark Blues would return down the A9 with a hard won point, but it wasn’t to be. There were no standout performers for the Dee tonight, but Marcus Haber showed how valuable he is with his ability to hold the ball and bring team mates into the game with his flicks and passing. That brought Dundee’s only goal, but sadly they were unable to repeat it and one goal wasn’t enough.