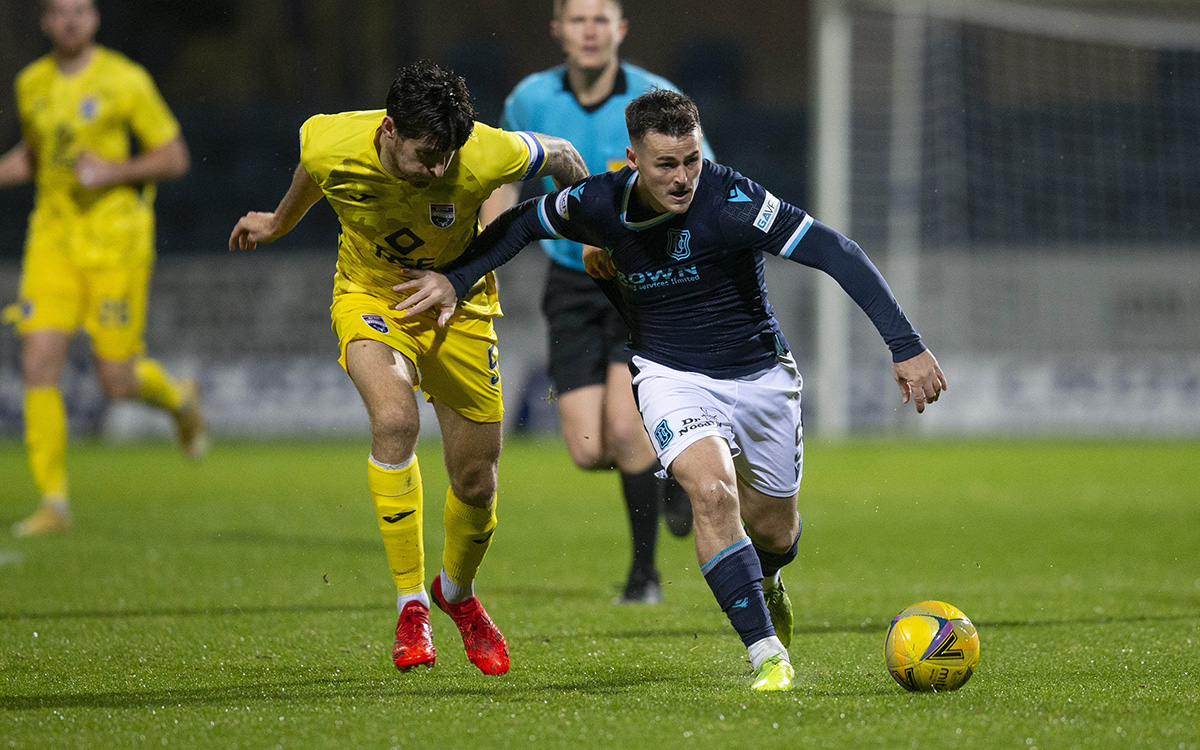 Dundee’s recent improvement in form came to an emphatic end with a 5-0 thrashing at home to Ross County. The Staggies ran away with the game in the first half, with four goals from Harry Clarke, Ross Callachan, Joseph Hungbo and Regan Charles-Cooke. With the points secured County were able to cruise through the second half and help themselves to a further goal from Charles-Cooke.

Dundee made two changes from the team that drew at Tynecastle. Paul McGowan and Jason Cummings started in the place of Max Anderson, who was unwell, and Luke McCowan, who was on the bench.

Ross County put in all the attacking in the opening 15 minutes without creating any real danger. However, it was worrying that the Dark Blues failed to stage a serious attacking move. Charlie Adam hit a powerful shot from 30 yards that Maynard-Brewer did well to turn round the post at full stretch.

The Staggies opened the scoring after 18 minutes with a strange goal. Alex Iacovitti hit a long pass out to the right wing where Joseph Hungbo was offside. The winger left the ball, allowing Harry Clarke to collect and run clear. Jordan Marshall was caught cold and couldn’t stop CLARKE who kept going to thrash an angled shot over Adam Legzdins.

The goal failed to jolt the Dee into action. Nine minutes later they fell further behind to a shambolic goal. Legzdins’ clearance was blocked by Jordan White. The ball fell kindly for Ross CALLACHAN and he shot into the empty net from wide on the left of the penalty area.

County were using the wide areas far more effectively than the Dee. They pushed the full backs forward and ensured their wide players were constantly involved in the game.

If the first two goals were dreadful from Dundee’s point of view there was no denying the quality of the third. HUNGBO took a free kick from 35 yards and swung his shot with pace over the wall, dipping into Legzdins’ top left hand corner.

James McPake responded by withdrawing Paul McMullan and sending on Danny Mullen to bolster up the Dee left and offer Marshall more protection.

The fourth goal arrived five minutes from the interval, and again it was very poorly defended. The Staggies were allowed to work their way to the edge of the penalty area with minimal interference. Callachan’s powerful low shot was well saved by Legzdins but Connor Randall quickly returned the ball into the goalmouth where Regan CHARLES-COOK prodded home an easy goal.

Dundee did not manage a single dangerous attack throughout the whole first half. There was a marginal improvement after the break but nothing that troubled the County defence or offered any hope that the Dark Blues might make a game of it.

Luke McCowan and Cillian Sheridan came on for Paul McGowan and Jason Cummings but it made no difference as the Dee went down meekly to a heavy defeat. The Staggies had picked up the reputation for conceding soft goals but there was no hint of that tonight. They did the basics well and ruthlessly exploited Dundee’s vulnerabilities.

The fifth goal, after 71 minutes, came as no surprise. The Staggies broke quickly and decisively as Clarke raced forward into space down the right. He kept going and pulled a pass across for CHARLES-COOK to take a touch and score easily from 12 yards.

The remainder of the game was played out in eerie silence as County held the Dee at bay all too easily and probed for further goals.

There is no need to provide much in the way of commentary on this result. The scoreline tells the full story. There are no excuses, no hard luck tales or fingers pointed at the officials. The Staggies were well worth their emphatic win. They were far superior to a passive and disjointed Dee in every department.