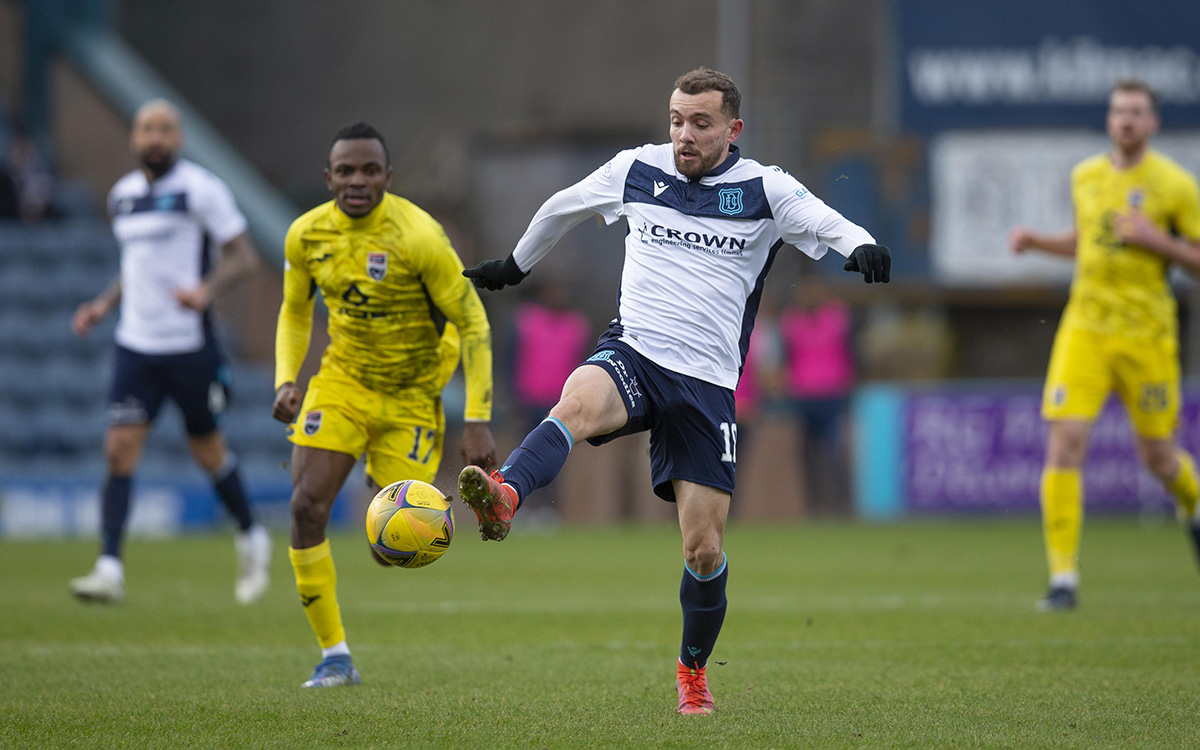 Dundee went down to a disappointing and damaging 2-1 defeat against Ross County at the Kilmac Stadium today. The Dark Blues took the lead midway through the first half through Zak Rudden, but poor defending allowed County back in the game on the stroke of half time. Regan Charles-Cook scored the winner 10 minutes from full time, punishing the Dee for a defensive mix-up and making amends for allowing Adam Legzdins to save his earlier penalty.

There were two changes to the Dundee team that drew in Tuesday’s derby. Zak Rudden came in for his first start and Jordan McGhee started in midfield. Danny Mullen and Charlie Adam were on the bench.

County kicked off and their punt out to the right wing gave Dundee a throw in. The Dee broke quickly and Niall McGinn found Paul McMullan in space to smash a shot off the top of the crossbar from 25 yards with only 37 seconds gone.

The Staggies were doing their share of the attacking but Dundee created more danger in open play. Max Anderson’s 18 yard shot was deflected for a corner as the Dark Blues chased an early goal.

Adam Legzdins had to move smartly to save after Ryan Sweeney’s header from Vokins’s cross struck Liam Fontaine and rebounded towards goal.

County offered their greatest threat from set pieces and Dundee escaped in a goalmouth scramble when Spittal swung a free kick to the far post.

The Dark Blues attacking was benefitting from the energetic runs of Jordan McGhee and Max Anderson from midfield. Their movement in front of County’s defence created opportunities for Dundee to play through the Staggies’ defensive line.

That brought the opening goal, midway through the half. McMullan found McGhee running toward the penalty area and he sent Zak RUDDEN clear to smash his first Dundee goal past Laidlaw from 12 yards. It was a fine finish to claim his first goal for the Dee.

The Dark Blues contined to play good football moving through the midfield into attack. Dundee constantly threatened to add to their lead but County were also dangerous when they attacked in an entertaining match.

The game’s turning point came after 39 minutes. Anderson played a long ball to Rudden who held it up before sending McMullan clear on the right. Anderson had raced through the middle, timing his arrival in the goalmouth perfectly for McMullan’s low cross. But from only six yards the young midfielder sent his shot straight at Laidlaw when he had to score.

Instead of being two goals ahead at half time the Dark Blues shot themselves in the foot and allowed County to equalise in injury time.

With 45 minutes having passed Dundee were in possession and should have easily played their way safely through the minute that was added on.

A long ball out of defence was smashed back up the park by Vokins. The Dee defence had switched off and Joseph HUNGBO was clear on the left. He hit a fierce, angled shot that flew through Legzdin’s attempted save. It was an awful goal to concede at such a vital time.

County took heart from the gift and started the second half confidently. Charles-Cook caused trouble with a skillful run along the byline with Legzdins having to push his cross out for a corner.

Dundee had a few promising attacks, but they lacked the conviction of the first half. The Dee had a penalty claim for handball when Hungbo knocked the ball away from Cammy Kerr.

Referee Don Robertson shrugged off that claim, but he was more impressed by County’s claim a couple of minutes later, with both decisions going against the unfortunate Cammy. Randall’s cross struck Kerr and the referee pointed to the spot.

Fortunately for the Dee Regan Charles-Cook’s spot kick was dreadful. Legzdins ignored his shuffle in the run up and waited, rather than diving early. The kick was weak and an easy save for the keeper who was rewarded for keeping his nerve.

Luke McCowan came on for Anderson who had put in a huge amount of work. The change gave the Dee some new energy, but the team had lost the collective zip that had stretched County in the first half.

The Staggies stepped up their game after half time and looked fresher, winning more of the midfield battles and attacking more effectively.

Nevertheless, Dundee handled their attacks well until an appalling misunderstanding gifted County the winning goal 10 minutes from full time. Ryan Sweeney and Cammy Kerr both went for a harmless high ball dropping into the Dee half 40 yards from goal. They wiped each other out, allowing Charles-Cook to pick up the pieces and run through unchallenged to score.

Danny Mullen had replaced Zak Rudden and he came closest to providing the equaliser Dundee needed so badly. McMullan broke at speed and flighted a cross to the far post when Mullen’s volley was parried for a corner by Laidlaw.

That was the end for the Dee. A bitterly disappointing afternoon was capped by a red card at the very end of the three minutes of injury time.

Dundee had a throw in near the corner flag. County cleared and Daley-Campbell tried to hack it back towards goal. He failed to see substitute Harry Paton coming up behind him and clattered the County substitute very high and painfully. It might have been a mistimed accident but the red card was inevitable.

This defeat was a blow for the Dee and a let down for the fans who had been greatly encouraged by the first half performance. However, Dundee could not sustain the energy or intensity of the first half, and threw away two truly horrible goals.

There was certainly plenty of good play from the Dee in the first half, but that won’t count for much if it cannot be sustained throughout the second half and cheap goals are given away.

The defence has been tighter in recent weeks but today was a painful replay of December’s match in Dingwall. Then, Dundee were comfortably in the lead, but conceded two terrible goals to gift three points to County. Groundhog Day always comes in early February. It happened to Dundee today, all over again.