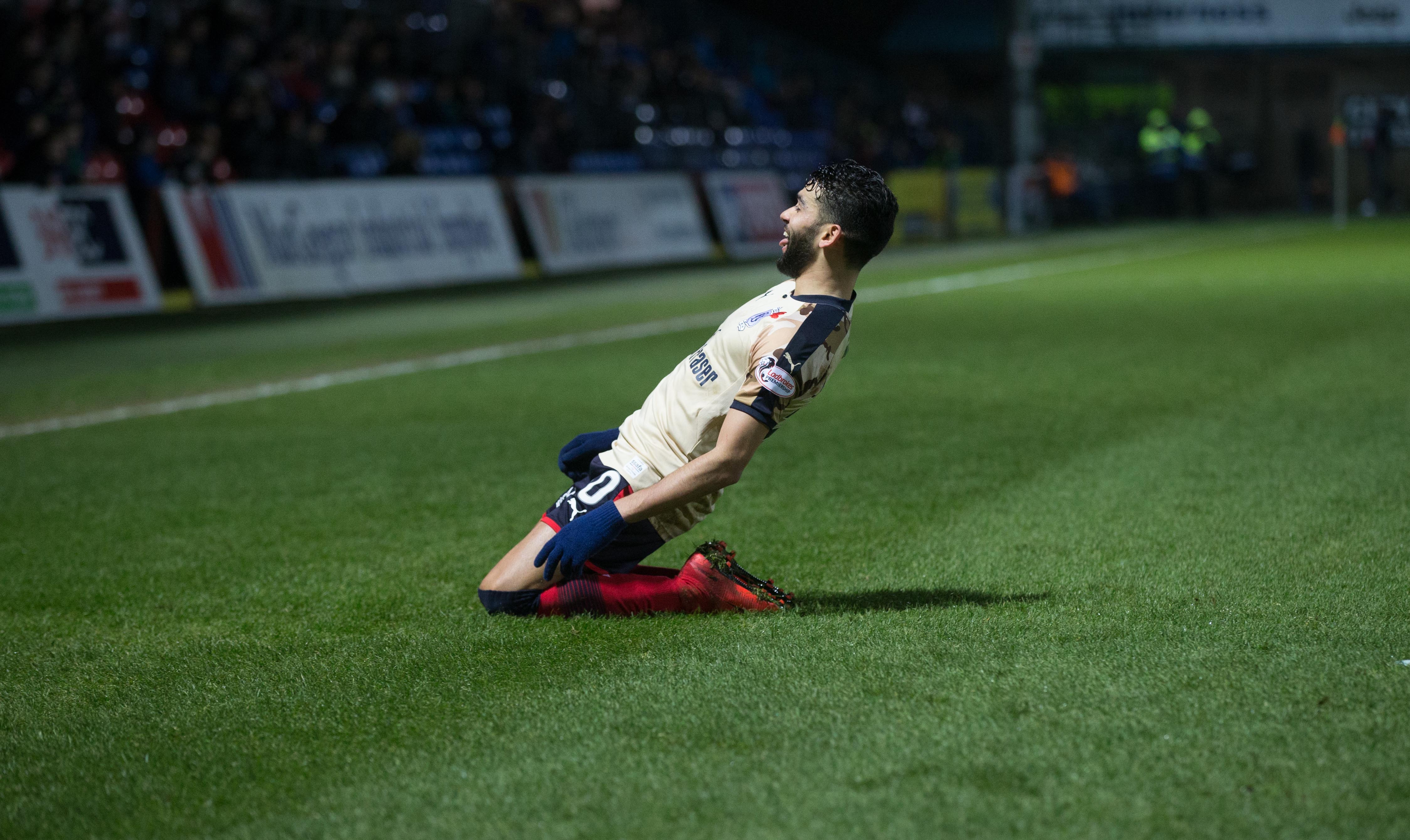 Dundee rewarded the travelling supporters with a richly deserved 2-0 win against Ross County in Dingwall. The Dark Blues were the better side throughout. It looked like Mark O’Hara’s spectacular early goal would be enough for three points but Faissal El Bakhtaoui’s late goal on the break ensured the points would be heading back down the A9 with the Dee. A solid, professional team performance, a clean sheet and two fine goals meant this was a very good day out.

The Dark Blues made only one change from the team that beat Rangers last week. Sofien Moussa, who came off the bench to replace Marcus Haber in that win, kept his place. County brought in Jamie Lindsay, Kenny van der Weg and Chris Eagles for Andrew Davies, Jim O’Brien and Davis Keillor-Dunn.

Both teams were keen to get off to a good start. County set up a neat passing attack in the first minute, but Chris Eagles sent his 18 yard shot straight into Elliot Parish’s midriff. Within 30 seconds the Dee had their first shot when Roarie Deacon’s effort from 20 yards whistled a foot over the bar.

The Staggies played some of their best football of the first half in the opening 10 minutes but they couldn’t force their way through the Dundee defence to bring Parish into action again. The Dark Blues were trying to keep possession and probe County’s defence, but also hit them fast on the break when the opportunity arose.

After 17 minutes Dundee took the lead in real style. Roarie Deacon nodded a high ball into the path of Mark O’HARA who strode forward to score with an unstoppable shot from 25 yards that was still rising when it hit the back of the net.

The goal settled the Dark Blues and from then on they were comfortably the better, more composed side. They held County at bay and always looked capable of adding to their lead, especially on the break. Jack Hendry burst forward to rifle a fierce shot a couple of feet over the bar from 15 yards. Faissal El Bakhtaoui caught out County keeper Aaron McCarey with a cross that came back into play off the crossbar. At the end of a first half in which County had struggled to create any danger Jamie Lindsay had a shot blocked from Ross Draper’s knock down.

County changed their shape at half time, switching to 4-4-2, but they still toiled in the face of Dundee’s organised pressing and careful possession football. While County were losing their shape and becoming increasingly ragged the Dark Blues remained composed and fluent. They should have killed off the game in the early stages of the second half when they carved County open repeatedly. McCarey parried a low shot from El Bakhtaoui and was relieved to see the ball evade both Sofien Moussa and Roarie Deacon who had followed in looking for a tap in. Josh Meekings then glanced a header from Jon Aurtenetxe’s free kick an inch past the post. Mark O’Hara had a fine run through the defence but McCarey saved well from his low shot.

Midway through the half County stirred themselves and created a chance at last. Substitute Billy McKay beat Parish to a cross, but his header dropped onto the top of the netting.

As the game entered the closing stages Scott Allan came on for Roarie Deacon and then Marcus Haber replaced the injured Sofien Moussa. As County’s chase for an equaliser became increasingly desperate the Dee looked ever more dangerous on the break. County’s second chance came five minutes from time when Lindsay scooped Eagles’s cross over the bar. El Bakhtaoui was denied by a fine full length save by McCarey, but there was no reprieve for County after 88 minutes. Dundee broke out of defence and Glen Kamara’s pass sent EL BAKHTAOUI clear to score, lobbing McCarey and kicking off noisy celebrations in the away stand that continued till the final whistle.

After the worrying run of five straight defeats the Dee have taken seven points from three games including two clean sheets. For the first time this season they have won consecutive league games, and this win takes them above County, out of the bottom two and up to 9th place. The Dark Blues were calm, organised and professional throughout the team today and made sure that the hosts were second best. This was the Dee’s first win on the road this season. In previous games they have let themselves down with poor finishing and by concedng poor goals. There was no sign of either failing today. Dundee were tight, organised, confident and helped themselves to two excellent goals.