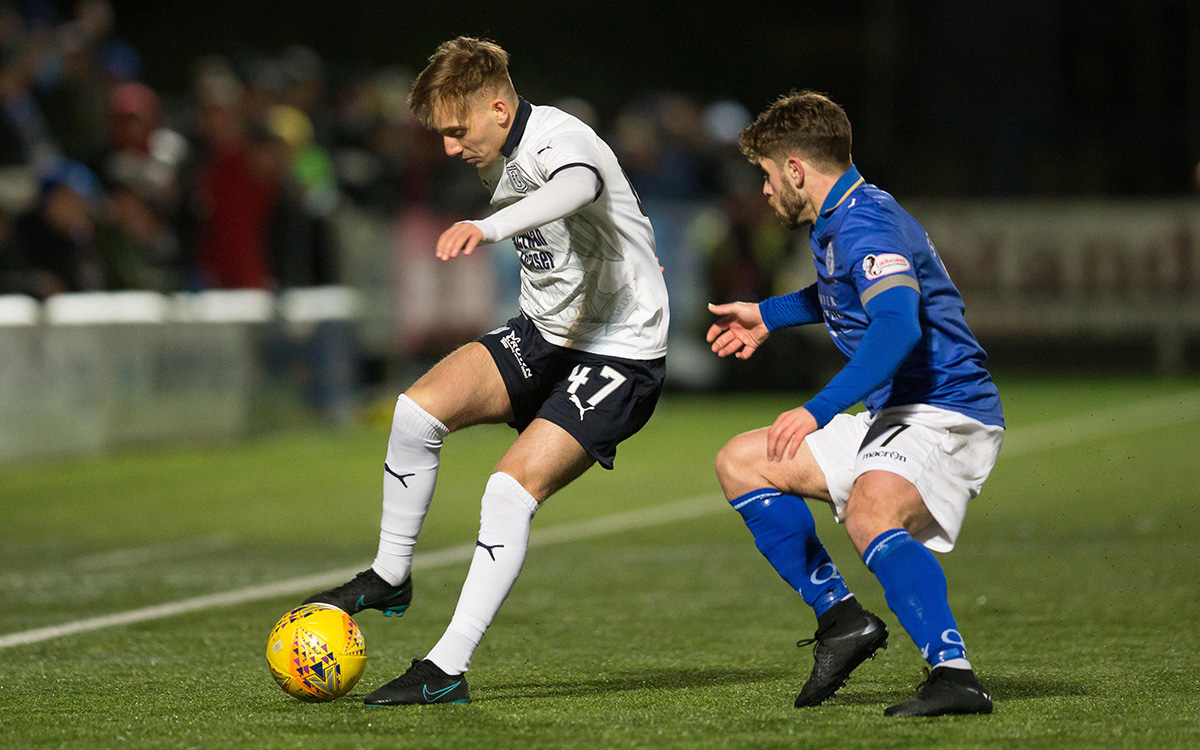 Dundee crashed out of the Scottish Cup with a 3-0 defeat in the Scottish Cup 4th round replay against Queen of the South in Dumfries. A catastrophically poor defensive performance allowed Stephen Dobbie an easy hat trick as Queens ran out comfortable and well deserved winners.

The Dark Blues made three changes from Saturday. Darren O’Dea and Kenny Miller replaced Martin Woods, who was ill, and Andrew Nelson, who was on the bench. Roarie Deacon kept his place after replacing the injured Jesse Curran early on Saturday. O’Dea was a direct replacement for Woods, operating in central midfield. Queens only change from the team that drew at Dens was Callum Fordyce coming in for Josh Todd, who was man of the match in the first game.

The Dee started fairly well, moving the ball around, keeping possession and pinning the Doonhamers back in their own half. The Dark Blues went close twice from Roarie Deacon’s set pieces in the early stages. Ryan Inniss headed a foot over the bar from a corner and Darren O’Dea sent a header from a free kick just wide of the post.

Queens had barely crossed the half way in the first 12 minutes, but when they launched their first serious attack they scored and from then until the final whistle they looked like scoring every time they came forward.

Lyndon Dykes won the ball inside his own half and found Stephen Dobbie wide on the right. DOBBIE moved infield, rather easily past Inniss, and with no-one closing him down launched a spectacular shot from 30 yards over Seny Dieng and under the crossbar.

Dundee’s game fell apart after the goal. They gave the ball away repeatedly and were always vulnerable at the back. Dykes ran clear and took the ball round Dieng before Cammy Kerr nipped in to clear. Callum Fordyce missed by several yards with a free header from a corner, but it was worrying to see the Queens centre back unmarked 12 yards out.

If the first goal looked careless the second, after 27 minutes, was negligent in the extreme. Indeed it was comically bad defending. The Dark Blues had a free kick for offside 40 yards from their own goal. Ryan Inniss rolled the ball back to Dieng, who returned it. Inniss played it back again, but left his pass short. DOBBIE darted in, emerged with the ball at his feet from a challenge with Dieng 25 yards from goal and scored into the empty net.

Inniss was then taken off, to be replaced by young Callum Moore, who moved into central midfield with Darren O’Dea moving back into central defence.

Lyndon Dykes came close to a third when he stabbed Jordan Marshall’s cross past the post. Dykes than almost pulled off a goal that would have been talked about many decades from now when he won the ball 40 yards from his own goal then lobbed Dieng from the edge of the centre circle in his own half. The ball flew over the keeper and bounced only a foot or so wide. This effort was from fully 65 yards and had everyone in the ground holding their breath waiting to see which side of the post the ball would end up.

The Dark Blues had another fortunate escape late in the half when Andy Dales brought Kyle Jacobs down in the penalty area for what looked very much like a penalty.

Dundee brought on young Jack Lambert at half time for Roarie Deacon, who had contributed little since his early set pieces. Dales had an early shot after the restart when he cut inside, but Alan Martin saved well. That was the last serious goal attempt that the Dee managed.

Dundee’s ball retention following the first goal had been poor, and if anything it deteriorated after the break. The Dark Blues gave the ball away continually and still looked dreadfully careless at the back. The defence was always wide open to runners from deep, but surprisingly none of the goals arrived via that route.

Dobbie almost completed his hat trick after dispossessing O’Dea on the edge of the penalty area, but he couldn’t get enough power in his shot under pressure, and Dieng saved.

The hat trick wasn’t delayed for long, and it came from another piece of appalling defending. Genseric Kusunga faced a high ball wide on the right. Instead of sending back the way it came, or out of play, he allowed it to drop over his head, controlled it and then sent a soft pass back in the general direction of Dieng. DOBBIE pounced, and with inevitable precision passed the ball around Dieng and inside the far post.

For once Dobbie slipped up when he was presented with a chance from another Kasunga mistake, and he blazed an 18 yard shot over the bar. The game was already settled by then, and Queens had no trouble holding off Dundee’s ineffectual attacks in the last 15 minutes. The Dundee defence never got their act together, but fortunately were not punished again.

The scoreline tells a sorry story, and none of the Dundee players can feel happy with their contribution.