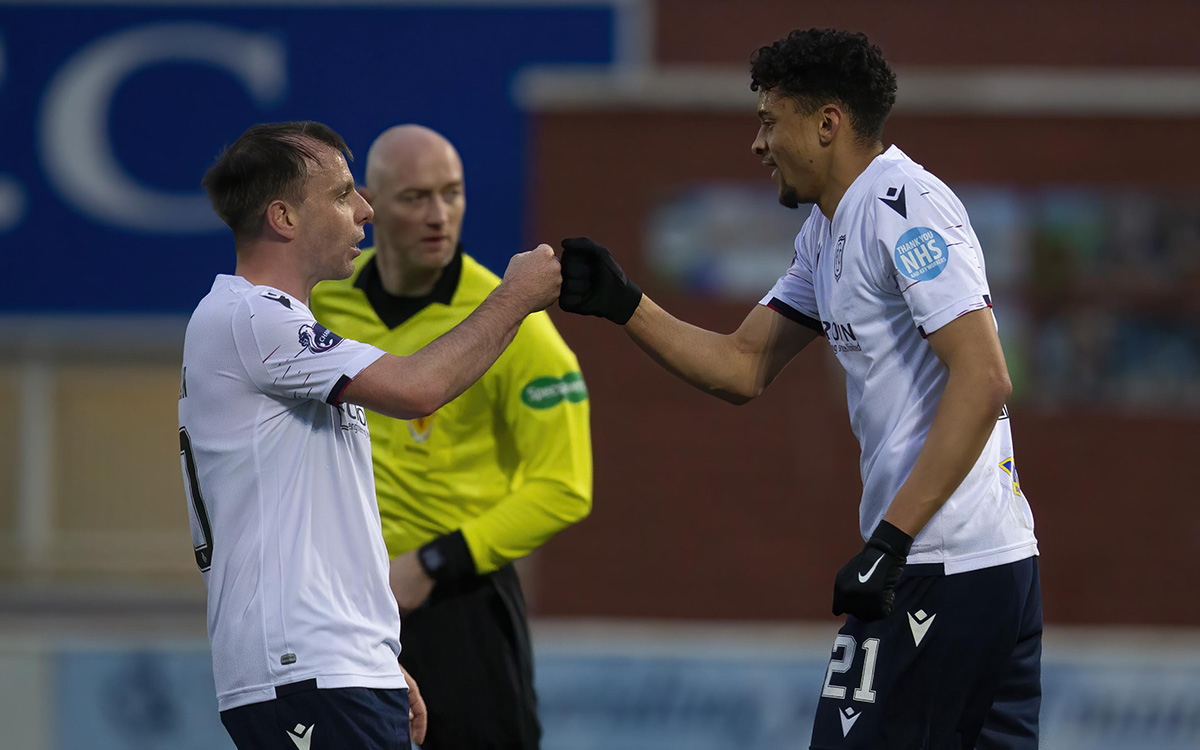 Osman Sow’s hat trick gave the Dark Blues a welcome 3-1 Boxing Day victory against Queen of the South in Dumfries. Two goals in the first half hour put the Dee in charge and Sow completed his hat trick early in the second half. A freakish wind assisted goal by Connor Shields allowed Queens some late consolation, but Dundee held out comfortably to take all three points.

The Dark Blues were unchanged from the team that drew against Dunfermline last week. Even the same set of substitutes was named. Queens made three changes after their defeat at Morton. Stephen Dobbie, Nortei Nortey and Tommy Goss dropped out and were replaced by Joe McKee, Aidan Fitzpatrick and Daniel Pybus.

Dundee started confidently, pushing forward and probing for openings. In the opening minutes they won two corners that produced nothing, but the Dee took the lead with the third, after 12 minutes. Charlie Adam’s corner from the right was headed into the top corner by Osman SOW from six yards.

Queens were struggling to get into the game as Dundee took control and threatened to extend their lead. The second goal arrived midway through the half and was created by Danny Mullen’s alertness. He sprinted after a headed backpass that was dropping short. Queens’ keeper Ronan Ferguson raced from his penalty area to challenge, and with both players arriving at the same time the ball broke kindly to Sow. The striker’s first shot was blocked by Ayo Obileye, but SOW collected the loose ball and shot calmly past the covering defender for his second goal.

The Dark Blues were much the more convincing team in midfield, finding space, passing and moving well, holding the ball patiently and looking for openings. Queens couldn’t create clear chances, but were given some faint hope by the occasional spot of untidy Dee defending when crosses were allowed to bounce in the goalmouth.

Mullen got on the end of Liam Fontaine’s cross, but Ferguson saved the header comfortably. The Queens’s keeper had a lucky escape when he lost track of Adam’s inswinging corner, which was caught by the wind, floated over him and struck the crossbar. Dundee almost made it three late in the half when Adam sent a free kick from the left zipping through the goalmout with Mullen inches away from turning it in.

Dundee continued their dominance into the second half and soon opened Queens up again. Adam sent Sow clear down the right and Mullen took the cross on the volley with Fergson saving at the expense of a corner. The third goal followed only a minute later. Liam Fontaine’s long throw was headed on by Lee Ashcroft. Mullen helped the ball on and Osman SOW was left with a simple tap in at the far post. This was the Dark Blues’ first hat trick since Kenny Miller scored three against Hamilton two years ago, and Sow’s first in Scottish football. None of the goals were spectacular, but Sow showed the value of a striker reading the game to ensure he is in the right place at the right time.

That was the end of the match as a contest, and also as a spectacle. The conditions became increasingly miserable as the strong wind was joined by torrential rain. Dundee were facing the elements in the second half, and handled them, and Queens’ increasingly forlorn attacks comfortably for the most part. Once again there was an awkward moment when a high ball was allowed to bounce through Dundee’s six yard box, but Queens couldn’t open Dundee up in open play.

After 79 minutes Queens got a great chance out of nothing when the ball broke to leave Daniel Pybus clear, but Jack Hamilton pulled off a great save. That was his only real save of the match, but frustratingly it wasn’t enough to earn him a clean sheet. Five minutes later Connor SHIELDS found himself on the left touchline with his back to goal. He turned and sent over a high cross that the wind caught and blew inside the far post.

This time there was no hint of a repeat of last week’s late problems. Dundee saw the game out calmly and without further incident to earn their first away league win of the season. Queen of the South may be bottom of the table, but Palmerston Park is always a very difficult venuie and no-one would have taken three points for granted before the game. The match was played in horrible conditions that always threatened to produce the sort of freak goal that Queens eventually did score. The Dark Blues had the edge over their hosts in every department and played a sensible, controlled game. They dominated possession, used the ball far more effectively than Queens, created more danger, and ensured that the home side’s attackers had a frustrating and ineffective afternoon. It was a very good afternoon for the Dark Blues.