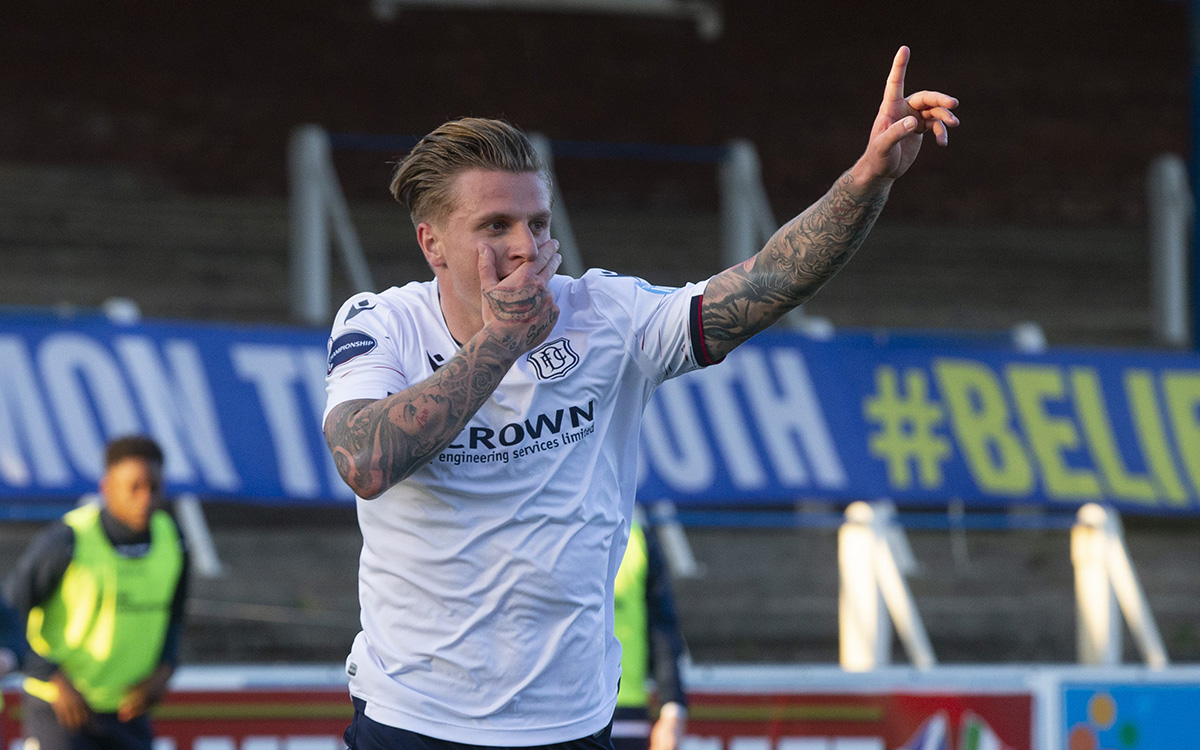 Dundee clinched second spot in the Championship by beating Queen of the South 2-0 in Dumfries while Raith Rovers were beaten by Hearts. Jason Cummings provided both goals in the first half and the Dark Blues played out the second half professionally to secure the win they needed. Dundee supporters are fond of saying that the club always does things the hard way, but tonight the Dee got it spot on.

The only change to the Dundee line up was Max Anderson replacing the injured Liam Fontaine. Anderson moved into central midfield, with Jordan McGhee dropping back into central defence.

The night might have been different if Ayo Obileye’s shot in the second minute had been a few inches to the left. Jones broke down the right and pulled a pass across for Obileye to shoot against the post from 18 yards.

The Dark Blues got a grip after that fright and took the game to Queens in an open match as they pushed for a goal. Jason Cummings had a couple of shots that didn’t greatly trouble Leighfield in the home goal, and Jordan McGhee blazed high and wide following a corner. After 13 minutes it was Dundee’s turn to shake the woodwork when Paul McMullan moved infield and crashed a fierce shot off the underside of the crossbar from 15 yards.

The vital opening goal was delayed only a couple of minutes. McMullan picked up the ball on the half way line and sent a perfect pass over the defence. Jason CUMMINGS ran through and rounded the stranded goalkeeper to score.

Queens had a decent spell after that, regularly getting the ball into Dundee’s penalty area, but without forcing Adam Legzdins into making a save. Dundee’s defence was always in place to crowd out attackers and block any shots.

Shortly after the half hour mark the Dark Blues almost extended their lead. Paul McGowan turned into space in midfield and his through pass released Max Anderson, whose shot across goal narrowly missed the far post.

The Doonhamers tried to play out from the back when they took the goal kick and immediately lost the ball to McGowan who ran into the penalty area and cut the ball back for Cummings. Leighfield blocked the first shot, but was helpless when the ball rebounded off CUMMINGS’ knee and into the net for the second goal that gave the Dark Blues some welcome breathing space.

Late in the first half Queens’ central defender Buchanan met a corner with a powerful downward header, but Cummings was by the post to clear. It was a vital clearance because the home side never came as close again.

The second half went exactly as every Dundee supporter would have hoped. Remarkably little happened as the Dark Blues cruised to the win they had been sent out to deliver. With the goals in the bag Dundee took no chances and played their way calmly to victory.

Jason Cummings came close to completing his hat trick when he ran onto a delightful long pass from Charlie Adam and flashed a shot across goal, just missing the far post. After a smart build up Paul McMullan hit a fine rising drive from 18 yards that missed the same post by inches.

Queens had a few efforts that barely counted as half chances and required only routine saves from Legzdins. Declan McDaid and Osman Sow came on for Paul McMullan and Jason Cummings in the later stages as the Dee ran down the clock with the minimum of fuss.

Most supporters would have been expecting a tense evening, but Dundee’s calm and professional performance, combined with the news of Hearts running in the goals in Kirkcaldy, meant that the target of second place looked sure to be achieved long before the final whistle.

This win means that Dundee are spared from competing in the play-off quarter-final, which will be a tasty Fife derby between Raith and Dunfermline. The Dark Blues can now prepare for the first leg of the semi-final in 12 days. Dundee have been plagued by inconsistency this season, but they have finished the regular season with an undefeated run of eight games from which they have taken 18 points and earned four clean sheets. There is still a long way to go in the battle to return to the Premiership, but the Dee will enter the play-offs confidently and in good form.