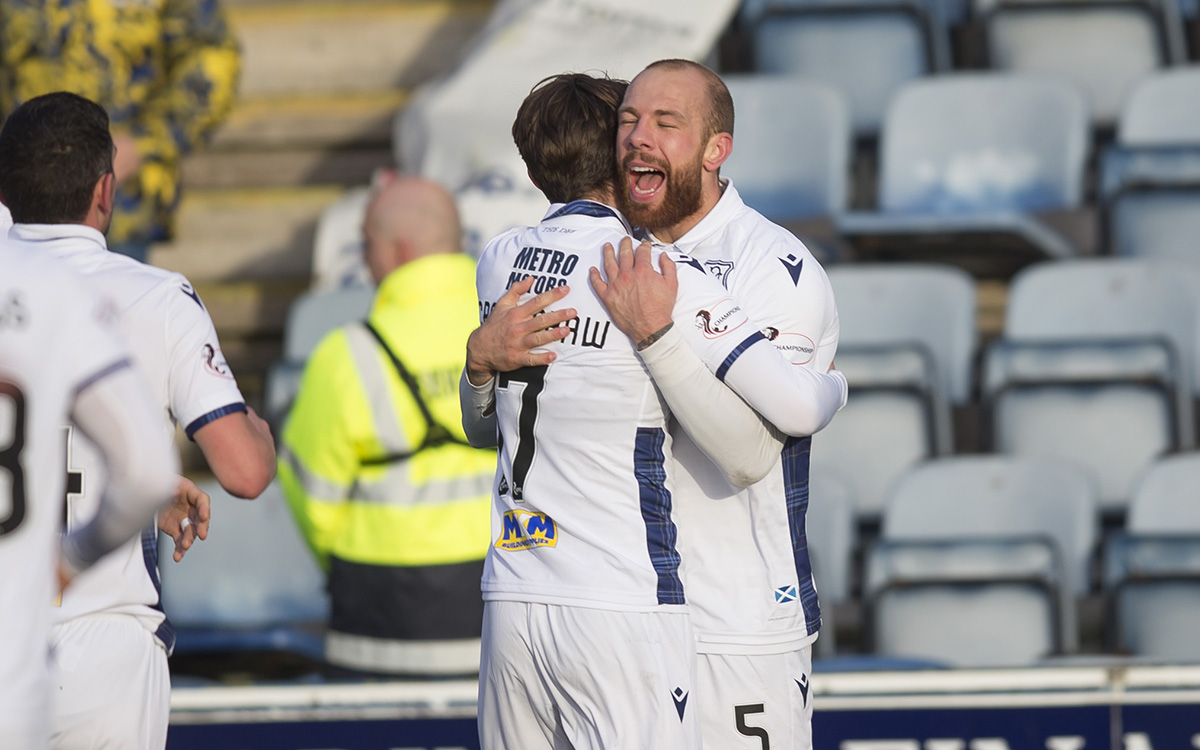 Jordon Forster’s first goal for Dundee gave the Dark Blues a valuable 1-0 win over Queen of the South in Dumfries. The winning goal came 20 minutes from the end of a game in which Dundee were always the stronger team, coping better with the miserable, cold, windy conditions.

The Dark Blues went with the same 3-5-2 formation used in the win over Partick, with Andrew Nelson replacing the injured Ross Callachan and Paul McGowan dropping into a deeper, midfield role. Queens made three changes from the side that lost at Arbroath. Scott Mercer, Abdul Osman and Callum Semple came in for Michael Ledger, Darren Lyon and Connor Murray.

A wicked, biting wind was swirling down the pitch towards the goal that the Dee attacked in the first half. The unpredictable wind offered little real advantage, making mistakes equally likely at either end. The early exchanges were almost entirely in Queens’ half, but Dundee’s attacking was restricted to a series of long throws hurled into the home penalty area by Josh Meekings with the Doonhamers’ defence struggling to clear them tidily.

The first chance fell to Queen of the South, with a little help from the wind. A Dee throw on the half way line held up in the wind and Deimantias Petrovicius seized the loose ball. With only one covering defender and Stephen Dobbie screaming for a pass Petrovocius opted to shoot from 20 yards, sending in a tame effort that Conor Hazard saved easily. It was a poor decision and shot because the Doonhamers never had such a good opportunity again.

The game settled down once more into a pattern of Dundee pushing Queens back without being able to build composed moves and create chances in the nasty conditions. The only two openings in the first half came when the home defence misread long balls. A clearance from Hazard sailed over the top allowing Graham Dorrans to run in on goal only to fire wildly over the bar. A cross from deep by Meekings was missed by the Queens central defence, who were concentrating on Kane Hemmings, and Andrew Nelson nipped in behind and headed narrowly wide.

When the teams turned around the wind had calmed down. It was still swirling awkwardly but at least it wasn’t howling into the faces of the Dundee players. The Dark Blues settled into a lengthy spell of pressure, probing for the opening goal and looking more dangerous than in the first half.

Queens’ keeper Ross Stewart saved well from a Jordon Forster header tipping the ball over the bar. Hemmings flashed a low 18 yarder past the post at the end of a prolonged attack.

Dundee were on top and pressing for a goal but the Doonhamers managed to hang on, with only the occasional attack, until the Dark Blues eventually broke through after 71 minutes. The central defenders had stayed in attack after a long throw and were waiting to pounce when Paul McGowan battled to win the ball on the right of the Queens’ penalty area. He crossed to the far post and Stewart made a remarkable instinctive save to keep out Christophe Berra’s header. The ball broke for Jordon FORSTER to smash home his first goal for the club.

Queen of the South had no option but to chase forward in the hope of saving the game. They couldn’t create any real danger, however. The ball bounced around in the Dundee penalty area a few times, but it was always whacked clear before Hazard was called into action.

Dundee looked far more likely to add to their lead than to be pulled back, and they should really have killed the game off before the final whistle. Oliver Crankshaw had replaced Andrew Nelson shortly before the goal and his flick sent Hemmings through to shoot narrowly wide. Crankshaw set up another chance when he picked up a loose ball in midfield, made tracks down the right and fired over a low cross that Hemmings blasted high and wide. Crankshaw had the final chance in injury time when he ran clear, but Stewart managed to save his shot.

This was a tough game for the Dark Blues in very difficult conditions and the win was very welcome. The defence was sound on a day when mistakes always seemed likely. The Dark Blue back line hardly put a foot wrong. Dundee were the more composed and creative side in midfield and had a more potent cutting edge in attack. The three points and a clean sheet were well deserved as the Dark Blues moved up into third place, behind Inverness on goal difference.