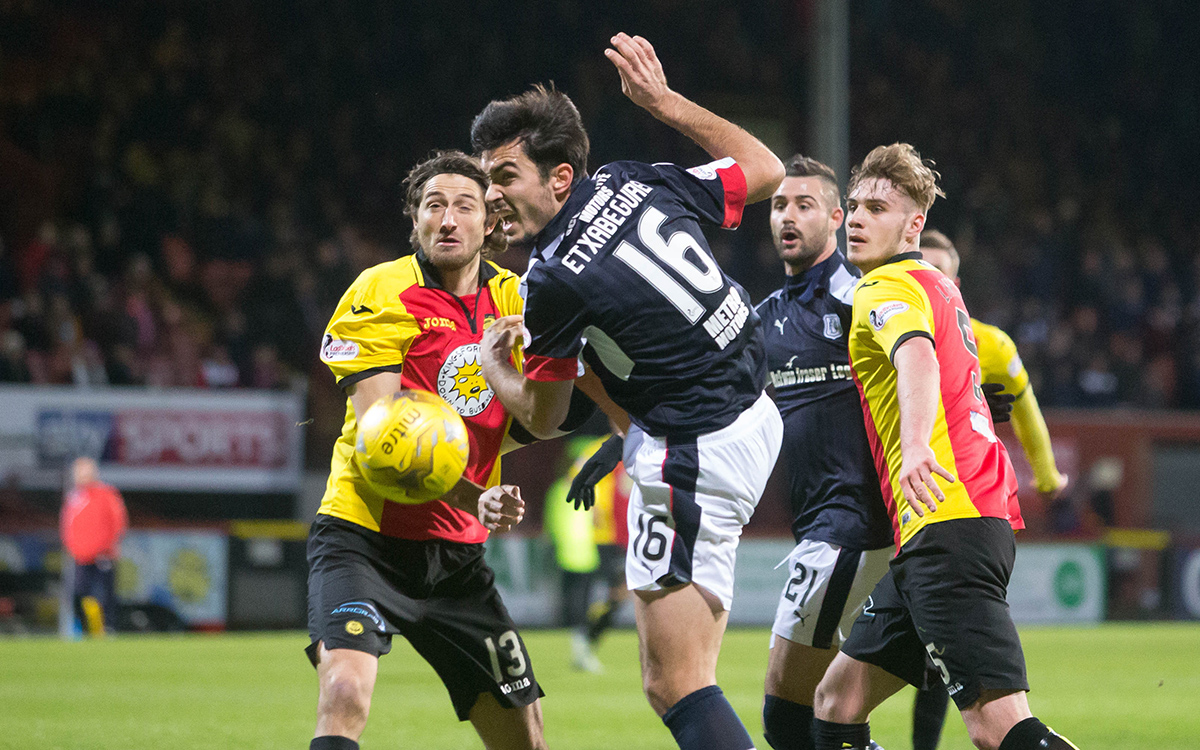 Dundee went down 2-0 to Partick Thistle in Glasgow tonight; the home side earned their win through first half goals by Callum Booth and Kris Doolan. The Dark Blues tried their best to get back into the game in the second half, but couldn’t turn possession into chances and the Jags held out fairly comfortably to take all the points.

Dundee made two changes to their starting line-up, fielding the same 11 that played the last half hour of the win against Hearts on Friday. Julen Etxabeguren and Paul McGowan started instead of Kevin Gomis and Mark O’Hara. Thistle’s only change was Adam Barton coming in for Steven Lawless.

Neither goalkeeper was troubled in the first fifteen minutes. The only mild inconvenience suffered by either defence was when Marcus Haber pressed Adam Barton into losing the ball, but Paul McGowan couldn’t connect cleanly with the fleeting half chance and Tomas Cerny saved easily.

Thistle took the lead with the first real shot of the match. Kosta Gadzhalov was judged to have fouled Kris Doolan 20 yards from goal in a perfect position for a left foot strike. Callum BOOTH took full advantage, sending the ball round the wall and beyond Scott Bain’s dive.

The Dark Blues responded well to the setback, camping out in Thistle’s half for most of the remainder of the first half. However, in spite of dominating the midfield battle they couldn’t turn possession into chances. With less of the ball Thistle looked more dangerous in fewer attacks, the main difference being that the Jags were able to break at pace, wasting no time in midfield.

Ten minutes from the break Chris Erskine set up Christie Elliot to fire in an angled shot at the end of a fast break, but Bain saved comfortably at his near post. The Dark Blues were caught out again when Ryan Edwards lost the ball on the edge of his own penalty area, but recovered to race 70 yards and play Erskine in for another angled shot, which Bain saved again.

The Dark Blues didn’t take heed and were hit by another break for the crucial second goal right at the end of the half. Erskine had time and space to run at Gadzhalov. He jinked wide and fired in a shot that Bain managed to parry, only for Kris DOOLAN to collect the loose ball and roll it into the net.

The second half continued much as the first had done with Dundee competing effectively in the midfield, but offering little threat to Cerny’s goal. Even though Thistle had to replace the injured Liam Lawrence with Ziggy Gordon at half time the Dee still couldn’t find the final ball that would open up Thistle. Too often players had to turn back when they found no-one making runs to get round or through the defence.

Faissal El Bakhtaoui came on for James Vincent, a change that pepped up the Dundee attacks and helped the Dee get more balls into the penalty area, but without greatly troubling Thistle’s defence.

The Dee’s best move of the match came only a minute after El Bakhtaoui’s arrival when the substitute and Tom Hateley combined to let Kevin Holt burst into the penalty area, only for Cerny to save the full back’s fierce drive.

The Jags had been growing in confidence as Dundee struggled to break them down. For a spell a further home goal seemed more likely than Dundee pulling themselves back into the game. Thistle looked dangerous on the break, but as the game wore on their attacks became more ragged, and perhaps Chris Erkine’s departure, with Ade Azeez coming on, explains that.

Rory Loy replaced Julen Etxabeguren for the last 12 minutes, during which Dundee managed to conjure up a couple of half chances. Both Haber and Loy managed to get headers on target, but each time the ball went straight to Cerny.

Some of Thistle’s defending in the last few minutes became a bit ropey, with wild clearances and misplaced passes. Sadly Dundee never looked dangerous enough to exploit any carelessness. There wasn’t a lot in this game, and with Dundee unable to put their game together in the final third they couldn’t afford to lose the first goal. Once they went behind they always looked in trouble and the home side did enough to deserve the points in a scrappy match.