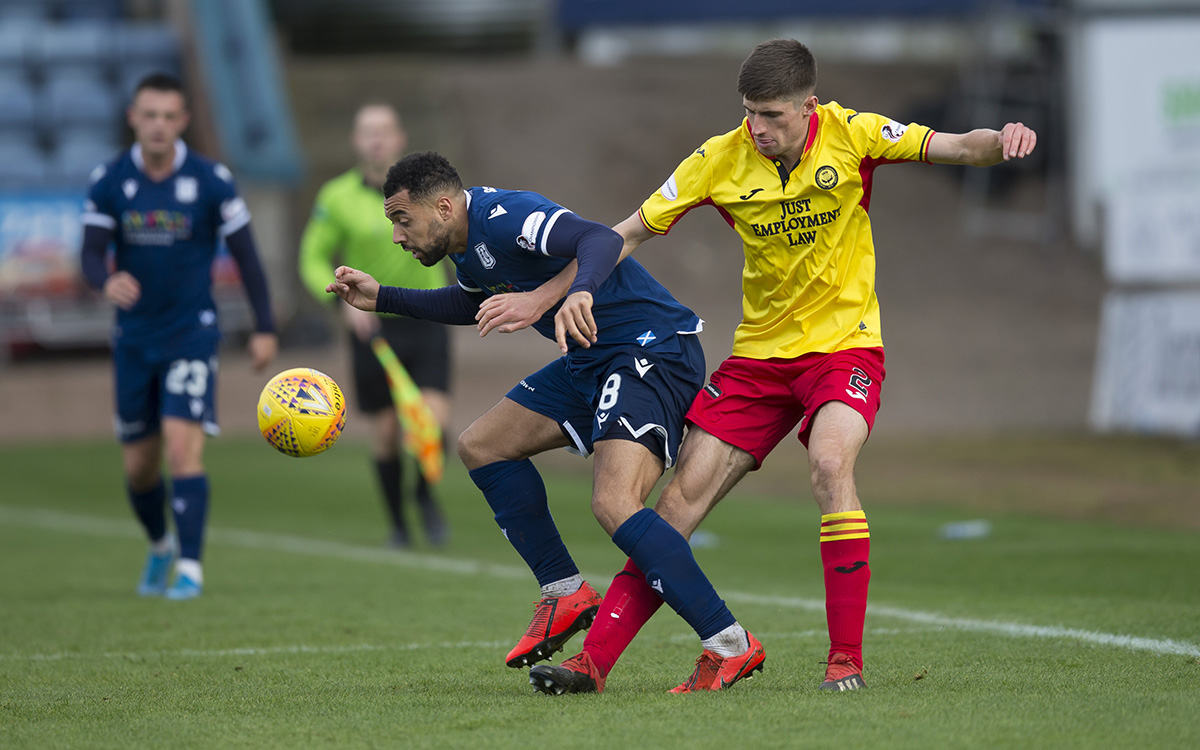 Dundee lost 3-1 against Partick Thistle at the Kilmac Stadium at Dens Park, throwing away all the points from a winning position. The Dee were comfortably on top in the first half and held a deserved half time lead through Paul McGowan’s goal. Thistle reorganised at half time and were unrecognisable in the second half. However, it took a defensive collapse in the last few minutes to let the Jags take the points as they ran in three goals from Kenny Miller, Shea Gordon and Lewis Mansell.

The Dark Blues sent out the same starting eleven that beat Arbroath a fortnight ago. Thistle were also unchanged from their Tunnocks Cup won over Connah’s Quay.

Dundee started much the livelier and sharper side. An early promising sign was a smart move that ended with Kane Hemmings putting the ball in the net, but from an offside position. Paul McGowan then ran onto a clever pass from Graham Dorrans and glanced his header narrowly wide. Declan McDaid also went close from long range and McGowan forced Scott Fox to touch a swerving shot out for a corner.

All the danger and inventive moves were coming from the dominant, but patient, Dark Blues and the the opening goal arrived after 25 minutes. McDaid shaped to shoot from 20 yards, but instead slipped a disguised pass through for Paul McGOWAN to sweep the ball past Fox and give the Dee a deserved lead.

Thistle barely featured in attack during the first half, but should have scored from their only serious effort. Rafa De Vita was allowed too much space to turn and shoot, but he lifted his shot over the bar.

Apart from that the Jags had only a brief flurry late in the half, but their attacks fell apart when they reached Dundee’s penalty area. Dundee continued to look far more dangerous. Jordan McGhee blasted a shot too high at the end of another penetrating move and Kane Hemmings saw his deflected shot bobble wide.

Thistle made two half time substitutions sending on Shea Gordon and Lewis Mansell for Thomas O’Ware and Rafa De Vita. They also abandoned the midfield diamond and started to find more space in wide areas.

The second half got off to a blistering start. Jack Hamilton pushed a Kenny Miller shot round the post for a corner that the Dee managed to scramble clear. The Dark Blues broke quickly and Fox parried McGowan’s shot. Hemmings followed up, but shot wide.

In the first half Thistle’s attacks were laboured but after the break they got men forward more quickly and found the passes that freed men to play dangerous balls into the penalty area. The introduction of the big, combative Mansell in attack also gave the Dundee defence a physical challenge with which they were uncomfortable. Hamilton saved well from Ryan Williamson’s angled drive at the end of a move that had everything Thistle lacked in the first half; pace, penetration and determination.

The game became increasingly open with further goals always looking likely. Despite Thistle’s huge improvement the Dee were still very comptetitive in an even game. Both teams had reasonable chances from good,low crosses but Joe Cardle miskicked for Thistle and Declan McDaid skyed his effort for the Dee.

Deefiant hero Gary Harkins came off Thistle’s bench after 77 minutes and promptly smashed a header from a corner off the outside of Hamilton’s post.

Dundee had become sloppy as they built attacks and gave the ball away far too often with men out of position. After 85 minutes they were caught out when Williamson chased a long diagonal pass to the byline and cut his pass back for Kenny MILLER to shoot low into the net from 12 yards.

Dundee almost went straight back into the lead but Scott Fox saved superbly to keep out Kane Hemmings’ header from Declan McDaid’s cross. It proved to be a match-winning save because Thistle went up the park to score again. Kenny Miller laid the ball off for Shea GORDON to fire a low, angled drive past Hamilton.

The shocked Dee piled forward to try and grab an equaliser and were caught out on the break in injury time as Lewis MANSELL ran clear and his shot struck Hamilton before looping over the line.

This was Dundee’s fifth home league game, and they had conceded only one goal in four matches and the first 85 minutes today. They then shipped three goals at the end of today’s game in a fashion that left the the supporters deeply frustrated. The points should have been safe and the game well out of the Jags’ reach by half time.

Dundee were not only by far the better side in the first half they also had the tactical edge, making far better use of the players’ abilities. After the interval they couldn’t adjust to nullify Thistle’s changes and resume their dominance, but the Dark Blues should still have been able to hold out for a win. Conceding one late goal would have been disappointing. Losing three was unacceptable.