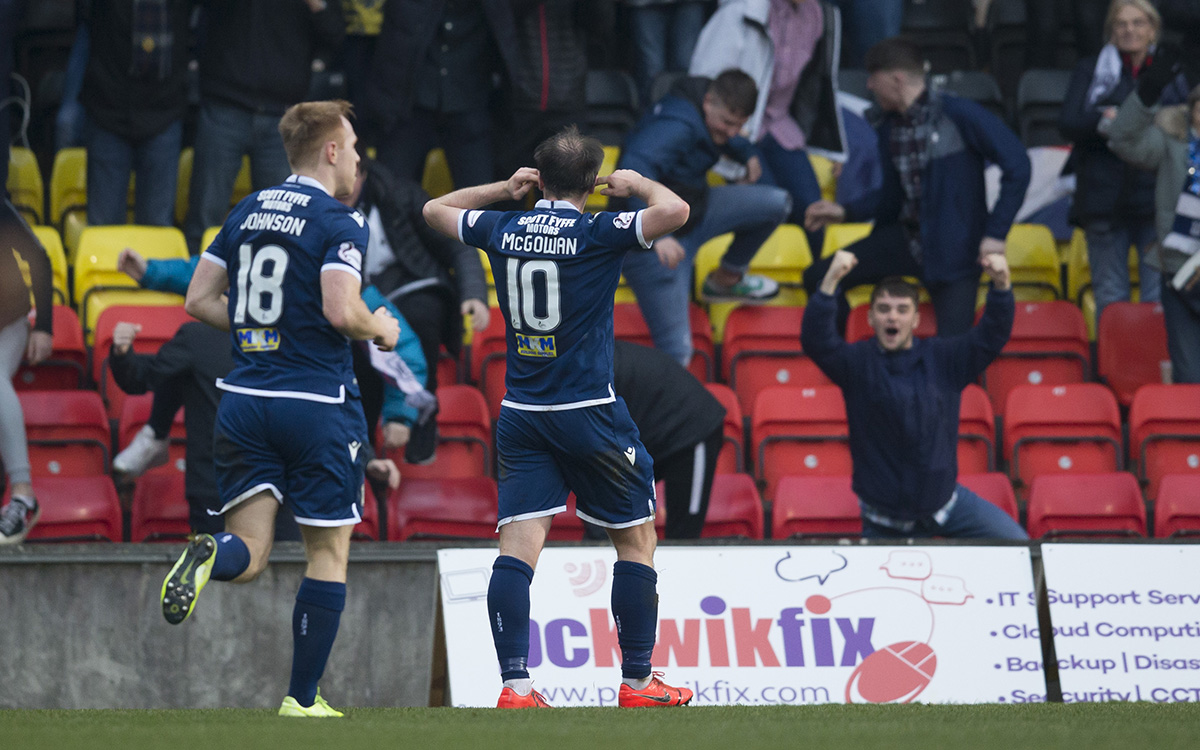 The Dark Blues returned from their pre-Christmas trip to Glasgow with three points earned in a 1-0 win over Partick Thistle at Firhill. Paul McGowan’s first half goal was enough to send the travelling fans home in cheerful mood. The Dee had the better chances and might have finished with a more comfortable win after a composed display.

Dundee made two changes. Sean Mackie replaced the injured Declain McDaid and Josh Meekings came in for Jordon Forster, who was on the bench. Thistle fielded the same eleven that beat Inverness last week.

The Dee started confidently and had two headers on target in the opening few minutes. Kane Hemmings combined with Cammy Kerr whose cross was flicked towards the top corner by Danny Johnson, but Scott Fox managed to paw the ball onto the bar. Hemmings then tried with a header after fine play on the left but failed to find enough power to trouble Fox.

Thistle took their time getting into gear and couldn’t turn a few moments of fleeting promise coming forward into any serious threat to Jack Hamilton’s goal.

Johnson and Hemmings combined well to set up Paul McGowan, but he scuffed his shot as he tried to bend the ball round Fox, who saved easily.

After attacking tentatively in the first 20 minutes the Jags clicked with a fast attack. Alex Jones chased a long pass into space on the right and pulled a low cross back for Kenny Miller to thump a 15 yard shot off the underside of the crossbar. Joe Cardle followed up but Cammy Kerr threw himself in the way to block.

Graham Dorrans was excelling in the centre of the park setting up a series of promising attacks with his vision and incisive passing. He flashed an 18 yard shot over the bar at the end of a fine run through the middle. At the other end Reece Cole was equally close with a dipping 25 yard shot.

Just after the half hour the Dee scored the sort of goal they been threatening to deliver. Hemmings picked the ball up on the left wing and went for a run down the line. He kept threatening to cut infield but kept going then whipped a fierce low cross to the near post where Paul McGOWAN had timed his run perfectly to stab the ball past the helpless Fox.

The Dark Blues almost extended their lead with some attractive and penetrating attacking orchestrated by Dorrans. The classy midfielder set up an attack that gave Johnson and Mackie shooting opportunities from around 12 yards but the Jags survived thanks to some frantic blocking.

Dundee made a low key start to the second half, content to play the ball around and dictate the pace of the game. After frustrating the Jags they sprang into life and turned the screw on the home defence.

Dorrans ran yet again at the home defence and made space for a shot from the edge of the penalty area. Fox saved well and recovered to parry Hemmings’ follow up for a corner. Dorrans’ delivery was missed by the home defence, arriving at Josh Meekings’ feet six yards out, but he couldn’t connect.

Amongst Dundee’s dangerous attacking Thistle set up their best chance of the second half. Ryan Williamson’s cross found Kenny Miller at the far post, but Cammy Kerr threw himself in the way to turn the header round the post.

Kane Hemmings then went agonisingly close twice in quick succession. He picked up the ball after a wonderful tackle by Fin Robertson to rob Miller. Hemmings ran at the Thistle defence, using Johnson to draw men away, and from 18 yards fired a low shot that was heading inside the far post till it took a slight deflection that sent it an inch the wrong side of the woodwork. Only a minute later he turned on the edge of the penalty area and tried another low shot only for this one to come back off the post.

Graham Dorrans deserved a goal for an outstanding performance but was denied by a superb save by Fox with another low shot from 18 yards.

In the last half hour the Dark Blues managed the game well and Thistle had only the one chance, after 74 minutes. A Williamson cross broke to Miller but Jack Hamilton turned his 15 yard shot away for a corner. Apart from that the Dee handled Thistle well as the clock ran down.

Sean Mackie almost had a chance when a Dorrans shot got stuck between his feet in front of goal and he couldn’t react quickly enough. The Dee’s last dangerous attack was a fast break by Hemmings and Mackie, who misjudged his cross, sending it straight out of play over the striker’s head.

Andrew Nelson replaced Danny Johnson for the last half hour. Towards the end Jamie Ness and Josh Todd came on for Paul McGowan and Kane Hemmings. Happily the five minutes of injury time provided no late excitement and the Dee were happy to see the game out quietly to the delight of the travelling support.

Today’s game might have lacked the bizarre thrills of last week’s win over Dunfermline, but three points, a clean sheet, no bookings, and a solid team performance were all very welcome. The two strikers combined well, with each other and with the midfield. The Dark Blues were inventive and dangerous in attack and the defence was sound. Josh Meekings has had a difficult time through injury and it was good to see him return and help the defence to their well earned clean sheet.