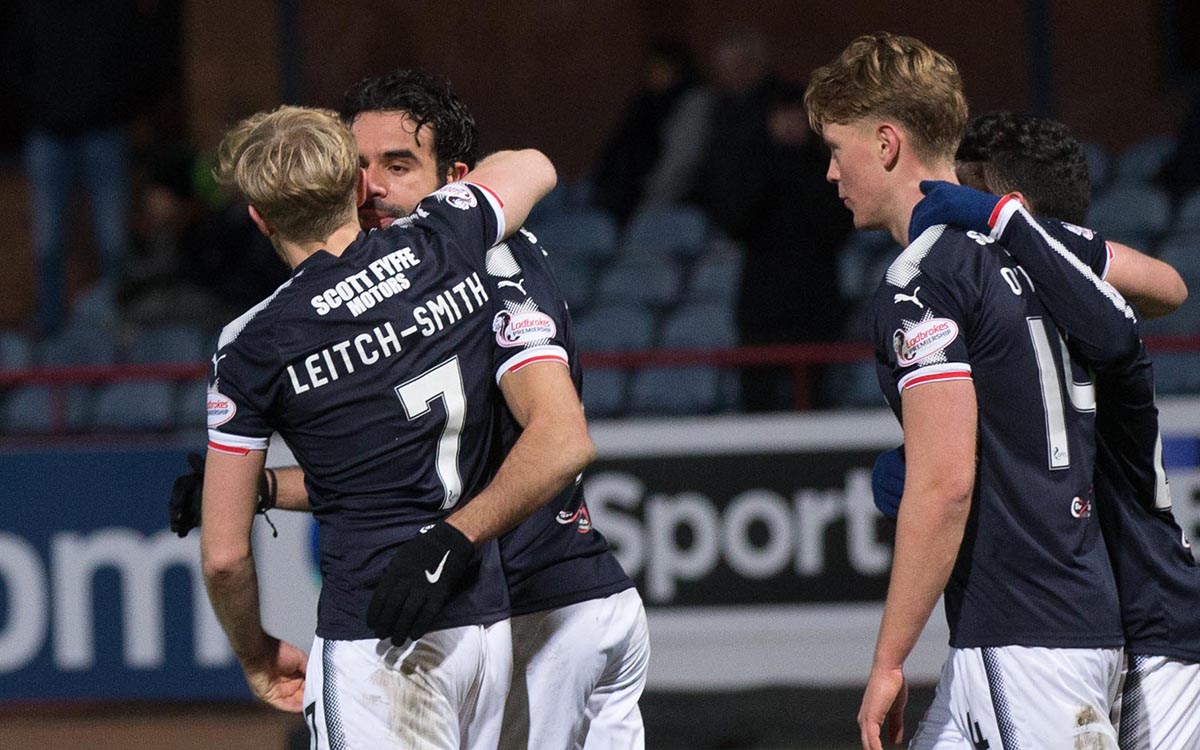 The festive Dark Blues served up some welcome Christmas cheer for the fans with a convincing and impressive 3-0 win over Partick Thistle at Dens Park this afternoon. A successful Sofien Moussa penalty sent the Dee on their way and Mark O’Hara added a second goal before half time. Moussa scored again from the penalty spot midway through the second half, allowing the commanding Dark Blues to cruise to the final whistle.

The Dark Blues were keen to get at the visitors and had Thistle in trouble three times in the first three minutes. Paul McGowan, Sofien Moussa and A-Jay Leitch-Smith were all involved prominently as the Dee tore at the Jags’ back line. The third attack ended with a superb save by Tomas Cerny to stop Danny Devine turning Jon Aurtenetxe’s low cross into his own goal.

Dundee continued to attack with genuine conviction, moving the ball around quickly and smoothly to find space repeatedly in the final third. Sofien Moussa was having his best game for the Dee and his tireless harrying of the Thistle defenders forced a series of mistakes. Moussa got his reward at the end of another fast attack. He ran onto Leitch-Smith’s pass and as he tried to round Danny Devine, the last man, he was tripped. MOUSSA took the resulting spot-kiock himself and sent Cerny the wrong way to open the scoring after 18 minutes.

Such was the Dark Blues eagerness to attack that they won a corner within seconds of the Jags kicking off after the goal. Dundee instantly won possession and were straight back at the throats of the fragile Thistle defence as Moussa found Leitch-Smith, whose shot was deflected wide.

The Dee imposed themselves on the game and settled into a spell of patient, passing attacking. Whenever they had the ball they looked capable of opening up Thistle. The visitors did lift themselves to have a spell of pressure in which they were briefly camped in the Dundee half. The crucial difference between the sides was that Thistle couldn’t turn possession and pressure into real danger as the Dark Blues defence held firm, whereas the Jags were always in trouble when the Dee had the ball.

Thistle changed their formation in the middle of the first half to try and get to grips with Dundee. The three man defence had looked vulnerable and so they switched to 4-2-3-1. It had no discernible effect and the visitors were always second best.

It was no surprise when goal number two arrived, ten minutes from the half time break, with a rapidly executed goal that showcased the Dee at their best. El Bakhtaoui was under pressure on the touchline, deep in Dundee’s half. Instead of panicking he found Aurtenetxe and the ball was switched quickly between McGowan, Kamara and Moussa, whose superb turn and pass sent El Bakhtaoui racing away down the left. His low pass to the far post found Leitch-Smith. Although his shot was blocked by Cerny, Mark O’HARA followed up to thrash the loose ball high into the net from six yards. The goal featured fast, accurate passing and hard running that shredded the Jags defence as the ball was moved skillfully 70 yards along the grass and into the net in just a few seconds. The players were cheered to the rafters by the delighted fans and especially the fanatically noisy hospitality crowd in the Main Stand.

Thistle’s only dangerous moment in the first half came when Cammy Kerr miscued a clearance, but Jack Hendry blocked Ryan Edwards’ shot. The Dee went close one more time before the interval when Cerny managed to turn El Bakhatoui’s wickedly swerving shot from 20 yards wide for a corner.

With a two goal lead Dundee were content to control the game from their own half after turning around to attack the Shankly end. Thistle had more of the ball but couldn’t break Dundee down. The Dee’s attacks were far more incisive and they looked like scoring every time they came swarming down the hill at the Jags.

The first dangerous Dee attack of the second half opened Thistle up, but Moussa saw his shot blocked for a corner after being played in by Leitch-Smith. A heavy first touch by Leitch-Smith cost him the chance after running onto a pass from O’Hara at the end of a lengthy passing move around Thistle’s penalty area.

There was almost a hiccup in the Dee’s dominance when Thistle substitute Chris Erskine found space to loop a header over Elliott Parish but Cammy Kerr was covering and cleared.

Kerr then won a penalty at the other end when Partick’s defence was undone by the combination of a determined Dark Blue attack and a slippery pitch. Dundee had men forward in numbers but Devine had the chance to clear only to lose his footing. Kerr pounced to take the ball but before he could shoot or cut the ball across goal he was flattened by Devine’s clumsy attempted recovery challenge. It was a clear penalty and once again MOUSSA sent Cerny the wrong way from the spot.

After being booked in the first half Moussa was prudently removed from the action, allowing Marcus Haber to come off the bench. Scott Allan also replaced El Bakhtaoui. The changes didn’t disrupt the Dee’s efficient control of the game and they continued to look the side more likely to score.

Mark O’Hara went close twice. He sent a fierce shot from 25 yards whistling past the post at the end of a long sequence of passes. Cerny then pulled off a marvellous save to deny O’Hara after the midfielder carved his way through the Thistle defence. Scott Allan wasn’t far off target with another shot from outside the penalty area. O’Hara had one final run through the Thistle defence, but his pass across goal found no takers.

The match finished with Dundee firmly in control, carefully protecting their clean sheet and looking for chances to open up the Jags once more. If Neil McCann was openly disappointed with the performance at Hearts on Tuesday he certainly had little to complain about today. The Dark Blues were solid in defence, hard working and imaginative in midfield and always dangerous as they cut their way through the final third. Sofien Moussa put in an excellent performance at centre forward and clearly relished the close and effective support provided by A-Jay Leitch-Smith. Above all this was a fine team performance and the Dark Blues were far too good for Thistle today.