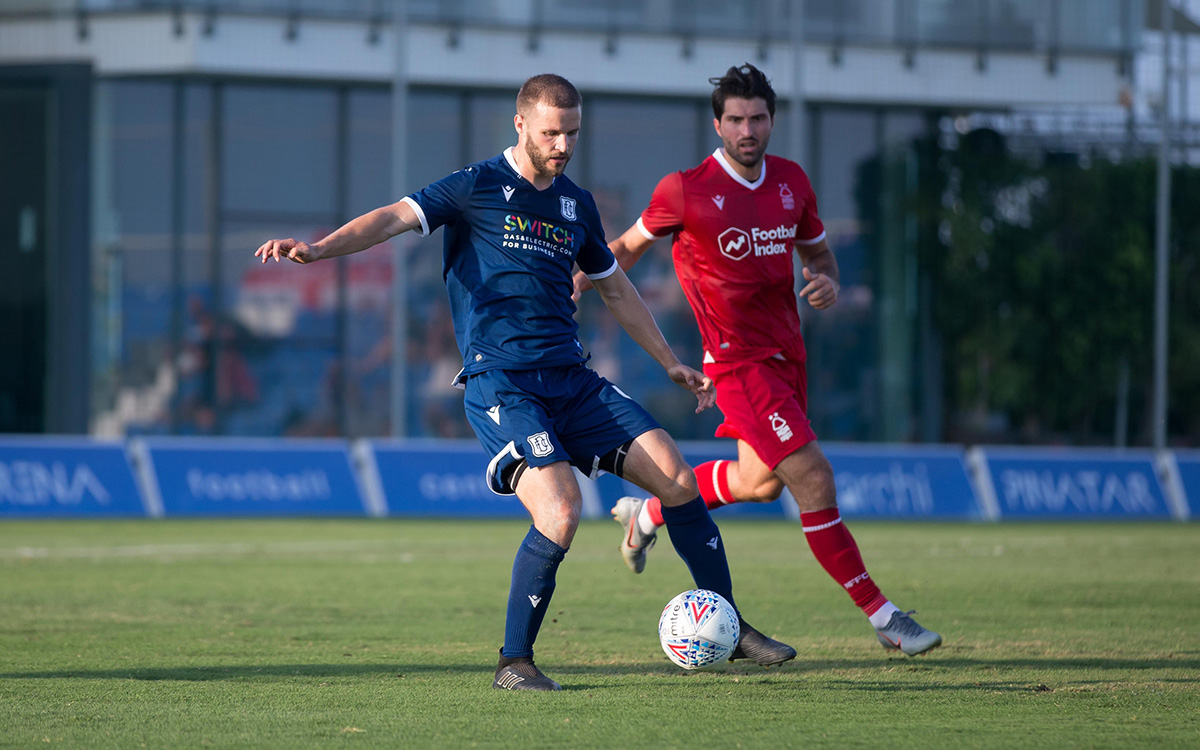 James McPake’s side took on English Championship side Nottingham Forest in the Pinatar Arena in the first match of the pre-season training camp.

Despite there being no goals in the match it was an entertaining contest with Dundee putting in a good performance.

Dundee started with Jack Hamilton in goal behind a back four of Cammy Kerr, Jordan McGhee, Josh Meekings and Jordan Marshall.

Finlay Robertson and Shaun Byrne were deployed at the 2 in midfield with Declan McDaid, Josh Todd and Paul McGowan behind Craig Curran.

It was Dundee who threatened first in the Spanish heat as Josh Todd fired a ball across from the right. Defender Robinson blocked the cross but the ball looped up and flew just over the bar.

There wasn’t much in the way of chances in the early period but Dundee were shading the match with some lovely exchanges in midfield.

After the water break mid way through the half Forest had their first goalmouth action but Marshall was on hand to block Lolley’s shot from the edge of the box.

Before the break Dundee had a couple of chances with Todd finding space 25 yards from goal but saw his shot sail over. Then Curran knocked a ball down for McDaid but the man who opened his account for the club against Brechin on Saturday didn’t catch it properly and the ball ran through to Pantilimon to collect.

Forest started the second half on the front foot with and increased tempo and Lolley came close with one from distance which he fired just past Hamilton’s post.

The changes began for Dundee during the second half, one seeing Jordon Forster take the pitch as a Dundee player for the first time.

It wasn’t long before he was in action, Richardson got down the right and pulled it back for Lolley. He pulled the trigger but McGhee blocked before Forster was on hand to clear.

A few more changes were made with Jamie Ness also making his first appearance but the flow of the Dundee performance wasn’t effected.

A Dundee break saw McGowan picked Nelson out at the back post but when he laid it off for Ness then midfielders shot was blocked by Yates.

The game had developed a bit of an edge at this stage with some tasty challenges being made.

Josh Mulligan was next to test Forest as he burst from the half way line, making it right to the edge of the box but his shot was held by sub goalkeeper Steele.

There was time for one more effort from Dundee and it came when a free kick was only half cleared and Sam Fisher found himself within shooting distance. The defender got his effort on target but it was held.

The referee blew the final whistle and despite ending goal less there was plenty of positives to take from the match. The team were backed by a small but very noisy band of Dundee supporters who created the atmosphere, singing throughout the match.