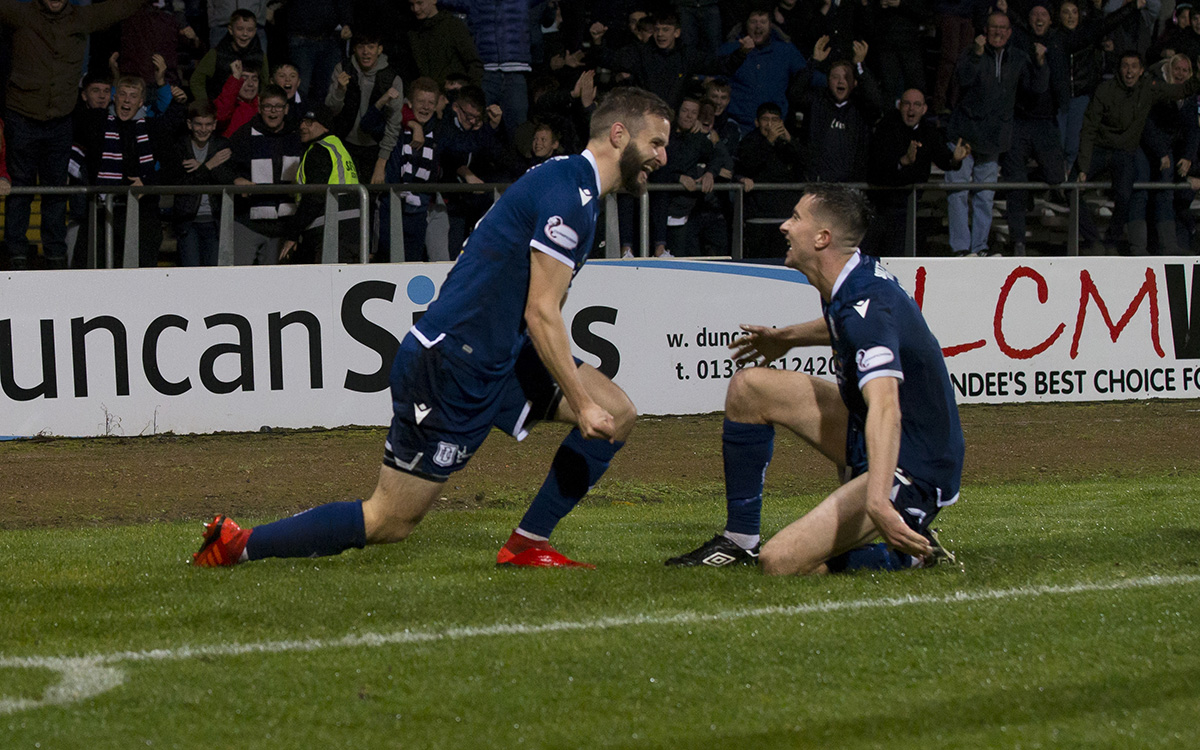 Dundee earned a 2-1 victory over Morton in tonight’s televised match at the Kilmac Stadium at Dens Park. Kane Hemmings put the Dark Blues ahead just after the hour mark only for Cameron Salkeld to grab a quick equaliser. Jamie Ness came off the bench to score his first goal for the Dee, who then closed out the match to take a deserved three points.

The Dark Blues were unchanged for the third consecutive match. Morton’s only change from their home defeat against Ayr was to bring Chris Millar in for Reece Lyon.

Dundee started well on a slippy pitch that looked like it would give defenders problems. Andrew Nelson had a shot blocked from 12 yards after a good build up by Graham Dorrans and Paul McGowan. Morton centre back Jack Baird camse close to an own goal when he swiped at Jordan Marshall’s fierce, low cross and sliced the ball over his own bar.

The Dee were looking good but suffered a setback after 15 minutes when they lost Jordan Marshall, who was caught by a late challenge. He limped off and Sean Mackie came on as a straight replacement.

The Dark Blues lost much of their fluency, although that was not because of the forced change. Mackie slotted in well enough but the midfield couldn’t get on the ball and control the game. There were too many unforced errors, and the attempts at more penetrating passes weren’t coming off. Too often the Dee resorted to long balls for Kane Hemmings, who had very little to work with.

Morton worked hard, restricting the space for the Dee midfield. The visitors had plenty of the ball and did try to get forward without creating any real goal threat.

Cammy Kerr’s persistence won him the ball and took him past a challenge before he was felled a couple of yards outside the penalty area. Graham Dorrans flashed an 18 yard drive narrowly wide following a corner. That was the sum of the Dundee’s efforts in a disappointing final 30 minutes of the first half.

Happily Dundee picked themselves up after the break and went on to set up camp in the Morton half as the visitors retreated into a packed defence. Graham Dorrans, Shaun Byrne and Paul McGowan were now getting on the ball and making passes in the final third, trying to prise open the defence.

The Dark Blues came agonisingly close to breaking the deadlock when Dorrans set up Declan McDaid, whose powerful drive was well saved by Sam Ramsbottom in the Morton goal. The keeper couldn’t hold the ball and was hugely relieved to grab it after Jordan McGhee and Kane Hemmings tried unsuccessfully to force it over the line in the resulting mass goalmouth stramash.

Dundee kept winding up the pressure and Jordon Forster headed over from a corner. Finally the Dark Blues broke through from another corner. Dorrans played it short to Byrne, took it back and then flighted over an exquisite cross for Kane HEMMINGS to glance a header across goal and inside the far post. 63 minutes gone, the Dark Blues were in total control and they had a goal in the bag against a team that had barely crossed the halfway line since half time. What could go wrong? Well, the answer was instant and deeply frustrating.

Barely a minute after the goal the Dark Blues switched off and allowed Morton to score with their first real attack of the half. Robbie Muirhead was given too much time and space on the left and he swung over a fine cross for Cameron SALKELD to stab the equaliser home at the far post.

The careless loss of a goal shook the Dark Blues and they lost their rhythm for a few minutes. Morton’s lone striker Bob McHugh wasn’t far off target with a dipping 20 yard shot. James McPake opted for two changes, sending on Danny Johnson and Jamie Ness for Andrew Nelson and Paul McGowan. Dundee got their game together again and started to turn the screw on the visitors.

Morton were sitting deep as the Dark Blues tried to pass their way through to goal and at last, to the delight of the supporters, it paid off after 80 minutes. Declan McDaid burst in from the left and his low cross was scrambled clear only as far as Dorrans who coolly passed across the penalty area for Jamie NESS to sweep the ball high into the net from 12 yards.

This time there was no slip up and Dundee held out to take all the points. Morton threw men forward but looked dangerous only from set pieces when they could send their big defenders forward to battle for the ball. The Dark Blues came closest to a goal when Kane Hemmings took advantage of dithering between Ramsbottom and his defence to steal the ball from the keeper on the edge of the penalty area a few yards from the touchline. His shot from a very difficult angle sailed over the bar.

It’s five years since the Dark Blues won three league games on the trot and they did it the hard way, though the win was deserved in the end. They were too sluggish for most of the first half, and gifted Morton a goal against the run of play through slackness. However, they showed strong character to keep playing patient football in the face of some dubious challenges. Dundee players were repeatedly caught late and painfully after playing the ball.

When Dundee’s midfielders get onto the ball and control the game the team looks very impressive and they are more than a match for anyone in this division. Tonight was no classic, but the Dark Blues did what they had to and didn’t let their heads drop. Three consecutive wins sets the Dark Blues up well for the derby next week and for that showdown they will need to be at their best for the full 90 minutes.