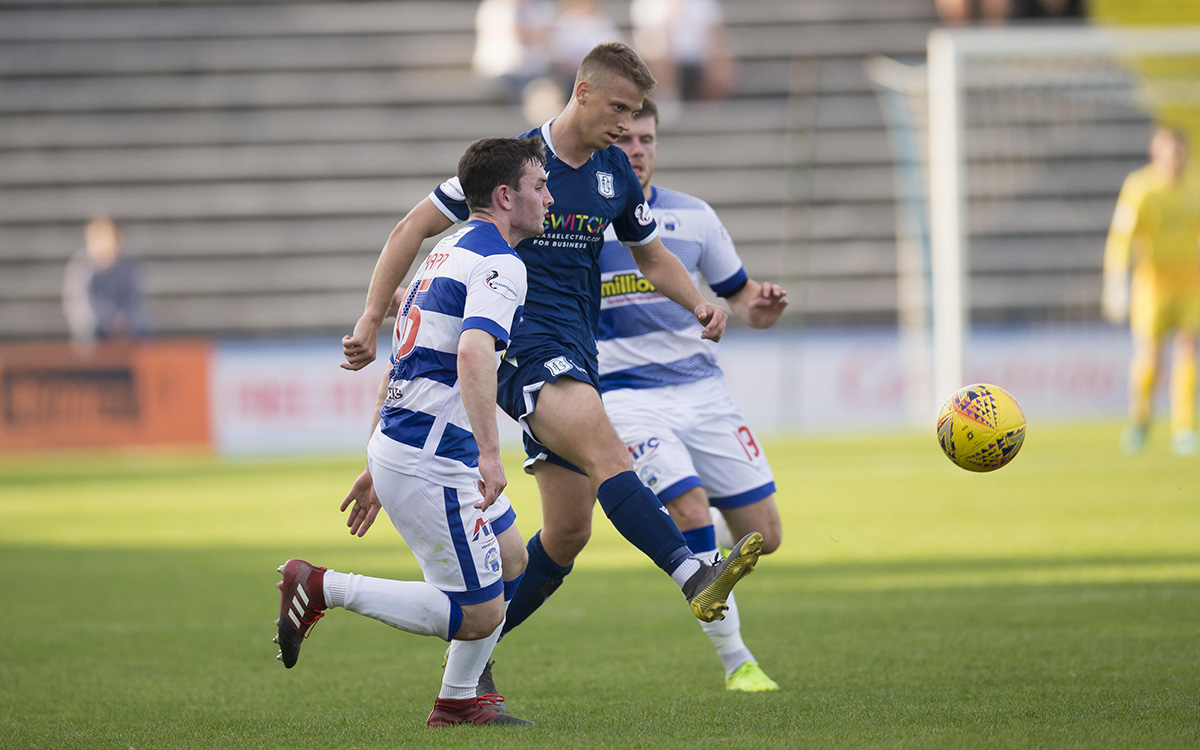 Dundee suffered a disappointing 1-0 defeat against Morton in Greenock, losing out to a header by Peter Grant on the stroke of half time. Despite endless possession in the second half the Dark Blues couldn’t break down Morton, whose hard work and dogged defending continually frustrated the Dee.

The Dark Blues were unchanged after last week’s win over Alloa. Morton made two changes; Peter Grant and John Sutton came in for Kyle Jacobs and Bob McHugh.

Morton had plenty of early pressure, earning four corners in the first 10 minutes without creating any chances. The home side’s main tactic was to play long balls for John Sutton to battle for, hoping to win set pieces or pick up possession from breakdowns in play.

Dundee were first to create real danger. Morton left back Lewis Strapp was struggling to contain Declan McDaid who raced past two challenges before crossing low to Paul McGowan who spun on the ball and brought a fine save from Danny Rogers, who tipped the shot round the post. McDaid took the corner short to McGowan who laid a pass on for Josh McPake but the young winger went down under a challenge before he could shoot.

Good work on the left by Jordan Marshall made space for McGowan to float a cross beyond the far post where McDaid’s volley flicked off a defender and sailed across goal missing the other post by inches.

Morton right back Welsh missed a McDaid cross and, caught by surprise, McGowan failed to control the ball at the far post and the home side scrambled clear for a corner. The Dark Blues kept up the pressure and Jordan McGhee went very close with a strong header from another corner.

Danny Rogers had to punch an inswinging McDaid corner over his own bar from almost on his goalline as Dundee threatened to open the scoring.

However, the goal arrived at the other end against the run of play, in the very lact action of the first half. Cammy Kerr fouled Cadden wide on the right as they challenged for a high, long ball. Cadden took the free kick whipping in a fine delivery that Peter GRANT headed powerfully past Jack Hamilton.

At the start of the second half Dundee pushed Morton back for long spells. The home side were sitting deep and frustrating the Dee. Danny Johnson headed a deflected McDaid cross wide but the Dark Blues were finding it hard to create chances against a deep and packed defence.

Morton left Sutton alone upfield and relied on supporting players racing forward when they had the chance to break. The Dee had a big escape from once such breakaway when Sutton set up Luca Colville, whose fierce shot was deflected wide.

Shortly before the hour mark Dundee made two substitutions. Graham Dorrans came on for his debut, replacing Shaun Byrne, then Kane Hemmings came on for Danny Johnson.

The pattern of the game didn’t change as Dundee continually tried and failed to get through the 10 men that Morton pulled back. The Dark Blues pinned Morton back in their own penalty area for a spell of serious, extended pressure, but the only shot that resulted came from McGowan, who couldn’t force the ball through a crowded goalmouth.

10 minutes from time a Hemmings cross took several deflections on its way to the far post where a lunging Marshall turned it wide. Deep into injury time McDaid almost managed to break through, but was foiled by a last gasp tackle by Baird with Grant completing the clearance as the ball bobbled towards the goalline.

Morton’s plan was hardly to play attractive, flowing football, but they delivered their game plan to perfection. For the most part Dundee handled Morton’s set pieces very well, but Morton had to get it right only once and that was enough. Their defence kept their shape and concentration, and the midfield kept grafting and grinding through the match in front of them.

This was a game in which a misfiring Dundee really needed to score first to draw Morton out, and they should have done so in a first half in which they were well on top. In a deeply frustrating second half they never found the inspiration or penetration to open Morton up. The Dee might have dominated the second half in terms of possession, but the game was always going the way Morton wanted and they can’t be begrudged the victory. It might not have been pretty, but the home side did what they had to do to take the points.