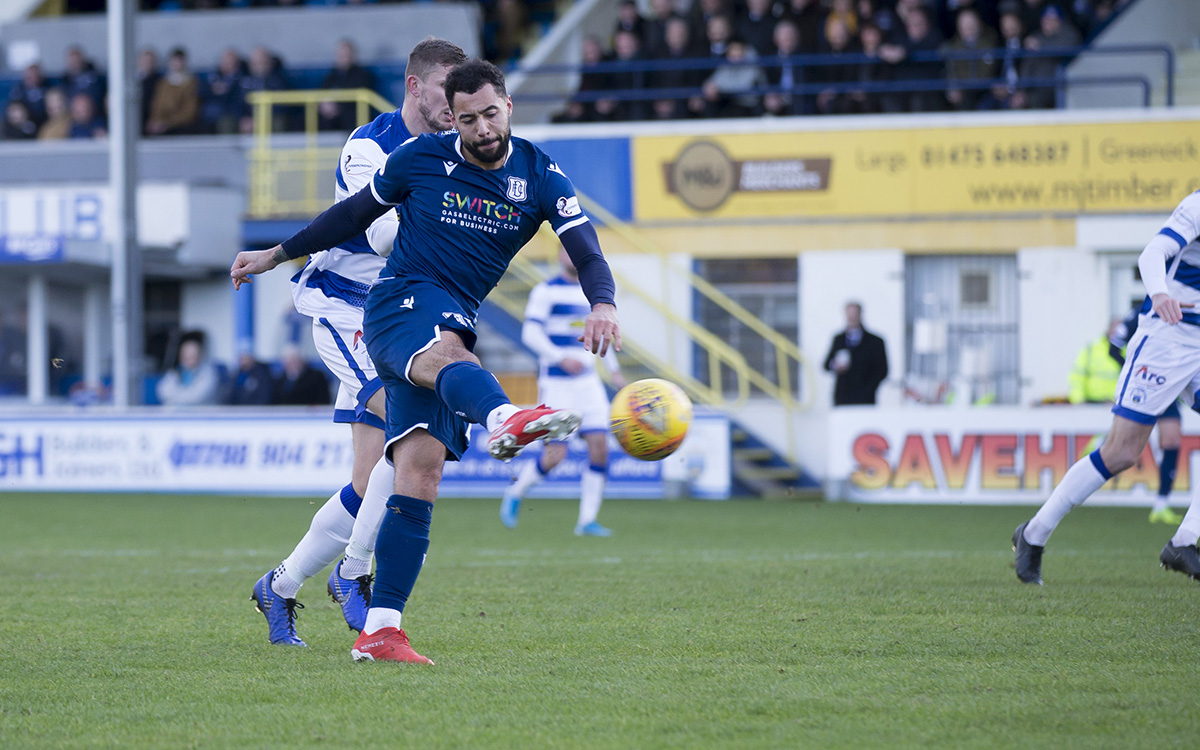 Dundee had to settle for a point this afternoon from a 1-1 draw against Morton in Greenock. Kane Hemmings gave the Dee an early lead only for Jim McAlister to equalise. Shortly after half time Morton’s Kyle Jacobs was sent off but despite massive pressure from the Dark Blues they couldn’t force a winner.

There were five changes from the team that faced Dunfermline. Conor Hazard started in goal after returning on loan from Celtic. Christophe Berra came in for his debut and Oliver Crankshaw made his first start after coming on as a substitute last week. Jordon Forster and Shaun Byrne also returned to the starting eleven. Jack Hamilton, Josh Meekings and Lyall Cameron moved onto the bench while Paul McGowan and Jordan Marshall were injured. Morton made two changes. Sean McGinty and John Sutton came in for Brian McLean and Robbie Muirhead.

The Dark Blues started brightly, getting men forward quickly and finding space well in the wide areas with Declan McDaid and Ollie Crankshaw prominent. Dundee should have gone ahead after six minutes when the Morton defence fluffed Jordan MCGhee’s cross. The ball broke to give Graham Dorrans a clear sight of goal from 12 yards but he scuffed his shot wide.

There was no let off for Morton five minues later when their central defence was again found wanting. Christophe Berra launched a long ball into the home box. Sean McGinty couldn’t cope with Kane HEMMINGS’ pressure and the ball broke neatly for the Dee striker to fire home from 10 yards.

Dundee were well worth their lead and continued to play well, coping with Morton’s attacks and breaking quickly whenever they had the chance. However, a free kick a couple of yards outside the penalty area gave Morton the chance to level after 25 minutes. Nicky Cadden’s shot was deflected, forcing Conor Hazard to readjust quickly to block. The loose ball fell to Jim McALISTER and the former Dee swept the equaliser home from close range.

The goal gave Morton a lift and they produced their best spell of the half in the next 10 minutes. Kalvin Orsi sent a curling shot from wide on the left just over the bar after a fast break. Nicky Cadden also had a go from long range and Hazard parried the shot away. Orsi did manage to get the ball into the net from an overhead kick, but he was offside.

The Dark Blues had plenty of attacks in the closing stages of the half, but couldn’t turn some promising possession into clear chances.

Morton were almost gifted the lead early in the second half when the Dee defence made a hash of a high ball into the goalmouth. Neither Colville nor Orsi could take advantage and Jordon Forster scrambled the ball out for a corner.

The home side were seldom seen in the Dark Blues’ penalty area after that as Dundee went on to dominate the rest of the game. Hemmings’ strength and control superbly set up McDaid to race down the left but his powerful shot was straight at Rogers. The game turned decisively in Dundee’s favour when Morton were reduced to 10 men. Kyle Jacobs fouled McDaid as he turned in the centre circle and that resulted in his second yellow card and the inevitable red.

Morton responded by pulling everyone back, defending in depth, and hoping to catch the Dee on the break, which they never succeeded in doing. The midfield was totally surrendered to the Dark Blues, who seldom faced any challenges till they reached the first of Morton’s ranks of defenders 35 yards from goal.

McGhee forced a good save from Rogers with a hooked shot from 18 yards. McDaid then curled a shot against the post with Forster heading the rebound wide. Hemmings had a shot blocked after taking a pass from McDaid. Christie Elliott came on for Ollie Crankshaw and, after drifting in from the right, he powered a 20 yard shot narrowly wide.

Morton had their backs to the wall and the pressure from the Dee was relentless. Frustratingly the Dark Blues couldn’t find their way through the packed defence. Time and again Dundee played their way into positions to cross, but the home defence either managed to head clear or scramble the ball away.

In injury time Elliott smashed a 20 yard free kick for goal, but the ball deflected off the wall and sailed wide. Morton were able to cling on for a draw and the Dark Blues left the field ruefully knowing they should really have taken all three points.

The Dark Blues have been in poor form over the last few weeks, but this was a greatly improved performance. They were the better side in midfield throughout and dominant once Morton went down to 10 men. The newcomers all did well, with Christophe Berra looking very strong in defence and annoying the home fans with his refusal to allow home players any easy possession. There were good moments from all the wide players, McDaid, Crankshaw until he was replaced by Elliott, but the Dee finally came up slightly short when they had Morton on the rack.