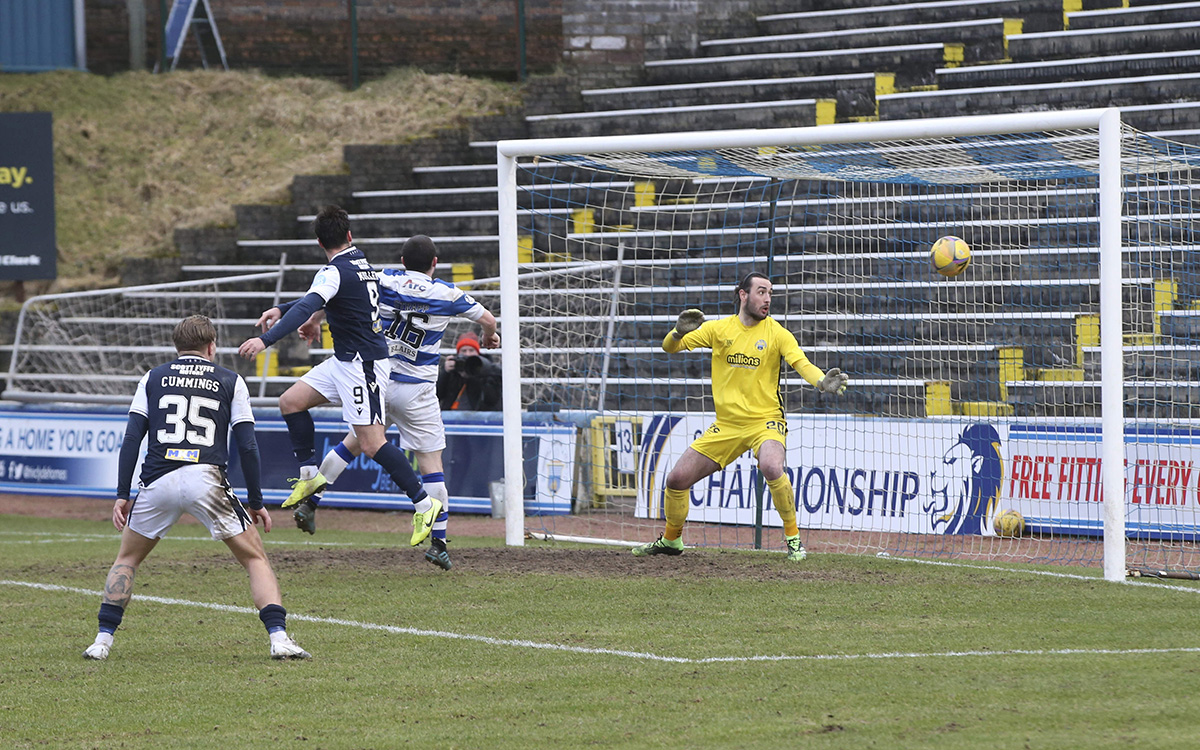 The Dark Blues had to settle for a point in Greenock, coming from behind twice to draw 2-2 against Morton. Craig McGuffie’s spectacular volley gave the home side a lead at half time. Jason Cummings equalised midway through the second half only for Luca Colville to put Morton back in front a few minutes later. Substitute Danny Mullen scored the second equaliser but Dundee couldn’t turn late pressure into a winning goal.

There were two changes to the Dark Blues’ team after last week’s game against Queen of the South. Christie Elliott and Finlay Robertson came in for Cammy Kerr, who was on the bench, and Charlie Adam.

Very little happened in the first half of a scrappy game on a poor pitch. Morton had a couple of half chances in the first 20 minutes. Cameron Salkeld’s shot from a difficult angle was blocked by Jack Hamilton’s legs. Salkeld wasn’t far off target when he flicked a McGuffie cross past the far post.

Dundee struggled to get any sort of passing game going and had only two efforts on goal before half time. Osman Sow headed over from Liam Fontaine’s cross and two minutes later Jason Cummings shot from 18 yards was comfortable taken by goalie Aidan McAdams.

The Dark Blues had been dominating possession and doing most of the attacking without looking threatening. Five minutes from the interval they were caught out for the third game running by a spectacular goal from distance. Craig McGUFFIE ran onto a dropping ball at the angle of the penalty area and let fly with a volley that flew over Hamilton and into the top corner.

The opening stages of the second half offered no improvement on the first. It was starting to look like the match would never rise above the turgid fare on display before half time, but the Dark Blues gradually stepped up their game. Max Anderson replaced Fin Robertson after an hour, playing in a more advanced role, and the change helper the Dee to exert serious pressure on the home defence. Danny Mullen also came on for Osman Sow.

The equaliser took only a few more minutes to arrive. A long clearance from Jack Hamilton was glanced on by Mullen. Jason CUMMINGS took the ball in his stride, held off the last defender and thumped the ball confidently past McAdams. It was a fine striker’s goal, showing awareness, strength and calm finishing.

The Dark Blues threatened to add a quick second when they broke down the left. The ball was played across to Cummings who tried to curl a shot back across goal only for a defender to throw himself into a block.

With Dundee chasing a further goal they were caught out again. When Morton launched a rare attack the Dark Blues were far too open. McGuffie had too much space on the left to pick out Luca COLVILLE, who scored with a downward header that bounced past Hamilton.

The Dees didn’t let their heads drop and resumed their assault on the Morton goal. Mullen turned and shot against the crossbar from close range and Anderson’s follow up was headed off the line by McLean.

Declan McDaid replaced Shaun Byrne for the last 20 minutes. After 80 minutes the Dee finally got the goal they deserved. McDaid took a quick free kick on the left, allowing Paul McMullan to send in a dangerous cross for Danny MULLEN to plant a firm header past McAdams from six yards.

Dundee might have grabbed a late winner when a long throw caused confusion in the home penalty area, but McAdams saved well, turning Max Anderson’s volley over the crossbar.

Morton emerged from their shell in injury time to try and snatch a winner. That allowed Dundee a fleeting opportunity to break away, but it was wasted and the Dark Blues had to settle for a point.

The Dark Blues could have won, and should have taken all the points, but familiar failings let them down. Dundee started slowly and offered little in a forgettable first half. Morton’s goals were well taken, but cheaply conceded with attacking players being allowed too much time and space. However, in the last half hour Dundee did look constantly dangerous, and the way Jason Cummings took his goal showed what an asset he will be for the Dee.

The poor pitch was a problem for both sides, but it took Dundee a long time to get to grips with a surface on which the ball would bobble rather than run smoothly. Once the Dark Blues did start to attack more convincingly there was always the danger that they would be caught out by a Morton break. It should have been three points, but overall a single point was all that Dundee deserved.