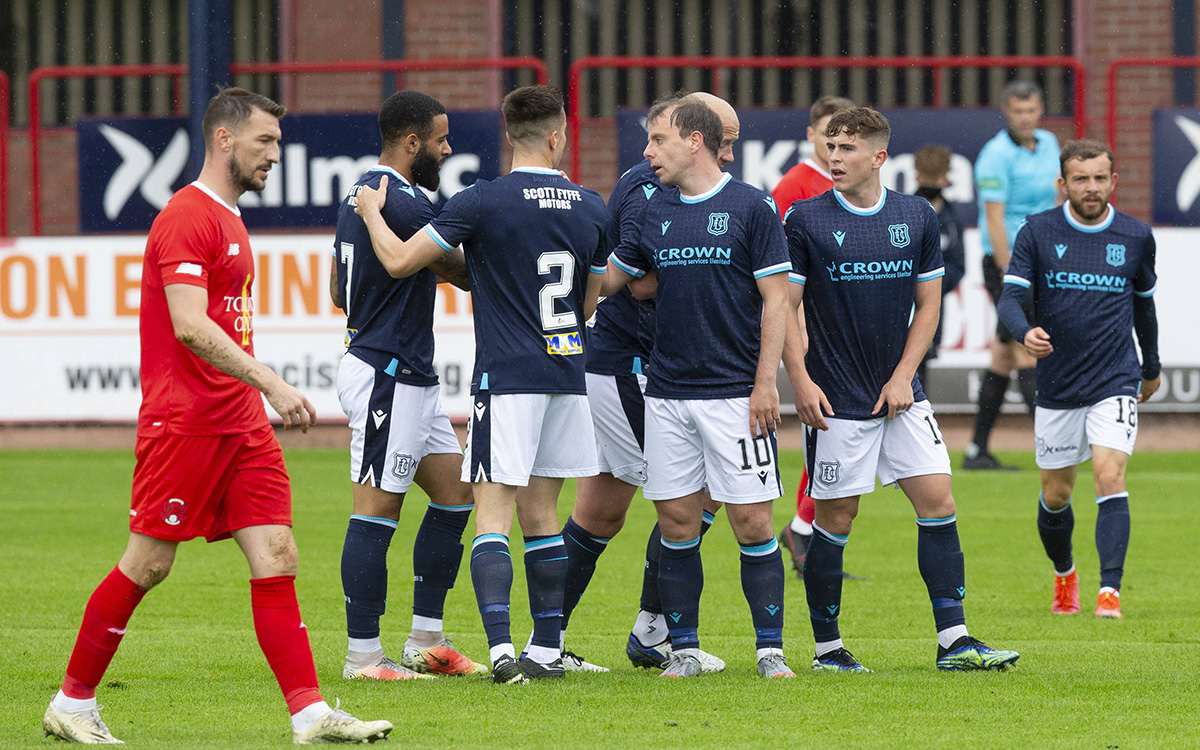 The Dark Blues put in a solid performance to beat English League Two outfit Leyton Orient 3-0 at the Kilmac Stadium. Paul McGowan gave the Dee an early lead and the scoring was completed in the first few minutes of the second half with goals from Alex Jakubiak and Lee Ashcroft.

Dundee took the initiative from the start and their energetic pressing gave the Orient defence uncomfortable problems. The supporters in the Bobby Cox Stand certainly enjoyed the mix of graft and craft that brought an opening goal at their end after eight minutes. Alex Jakubiak’s hustling won the ball deep in Orient’s half. Paul McGOWAN took over and curled a lovely shot into the top corner from 20 yards.

Orient continued to struggle against the Dee’s energy as they tried to play out from the back. A poor clearance under pressure from goalkeeper Sam Sergeant went straight to McGowan, but the shot from 40 yards drifted so far wide that it never reached the byline.

After a difficult opening 10 minutes the visitors went close in their first attack. A long cross from Ruel Sotiriou found Matt Young beyond the far post, but Adam Legzdins pushed his shot round the post for a corner.

Referee Grant Irvine played a well judged advantage after Max Anderson was flattened by a late challenge in midfield. Paul McMullan raced away and his low shot from 18 yards was heading inside the post till an excellent fingertip save by Sergeant touched the ball away. In the same passage of play Paul Smyth showed electric pace to race through the inside left channel but he angled his shot across goal and wide of the far post. Dan Happe, the culprit responsible for the original foul, was then booked – an unusual feat in a friendly.

The Dee should have added to their lead when Alex Jakubiak chased down a slack backpass and rounded the keeper. From 15 yards he had only the frantically backtracking Happe to beat but the defender somehow managed to turn the shot against the crossbar and Orient escaped.

At half time the only change for either side was Jordan Marshall coming on for Cammy Kerr at left back. The Dark Blues blew Orient away in a blistering start to the half, scoring twice in the first three minutes. Dundee kicked off and had the ball in Orient’s net in 19 seconds, before a visiting player had a touch of the ball. Marshall made an instant impact, racing down the left onto Fin Robertson’s superb pass to flash over a low cross for Alex JAKUBIAK to walk the ball home at the far post.

The third goal arrived only three minutes later. Lee ASHCROFT stayed up after a corner was cleared, and when Charlie Adam crossed he guided the ball across the keeper and inside the post with a measured volley from eight yards .

Orient should have pulled a goal back in a brief spell when they were on top and dangerous. Aaron Drinan had a half chance with a far post header from Sotiriou’s cross, but couldn’t get enough power in his header to trouble Legzdins. A couple of minutes later Drinan was desperately unlucky when he smashed Sotiriou’s cutback past Legzdins. Incredibly Lee Ashcroft surpassed Happe’s first half goal line clearance with a spectacular diving header to send the ball against the post and to safety.

After an hour Orient made a mass substitution, sending on nine new players. Their team for the last 30 minutes consisted entirely of home grown players, including five from their academy.

Dundee could have grabbed a fourth with a neat move. McMullan’s cross was touched by Jakubiak into the path of McGowan, who took a heavy first touch that allowed the goalkeeper to grab the ball.

The Dark Blues made six changes after 69 minutes and with 10 minutes left sent on two young trialists. Only Adam Legzdins and Christie Elliott played the full match.

Jordan McGhee passed up a good chance after persistence by Paul McGowan gave Declan McDaid room to cross. He chested the ball down but hammered his shot too close to the new keeper Rhys Byrne who managed to block.

Jordan Marshall was a constant threat attacking down the left wing and he ran clear onto Ryan Sweeney’s long pass only to be fouled a foot outside the penalty area. Jordan McGhee’s free kick struck the wall and that was the final piece of attacking action.

As so often in friendlies the game became scrappier when the mass substitutions started. However, Dundee were dominant for the first 60 minutes and were good value for their three goal lead. The Dark Blues worked hard, moved and passed well, creating plenty of chances. The combination of attractive football and sheer hard graft pleased the fans and their applause at the final whistle showed how much they enjoyed their first visit of the season to the Kilmac Stadium.