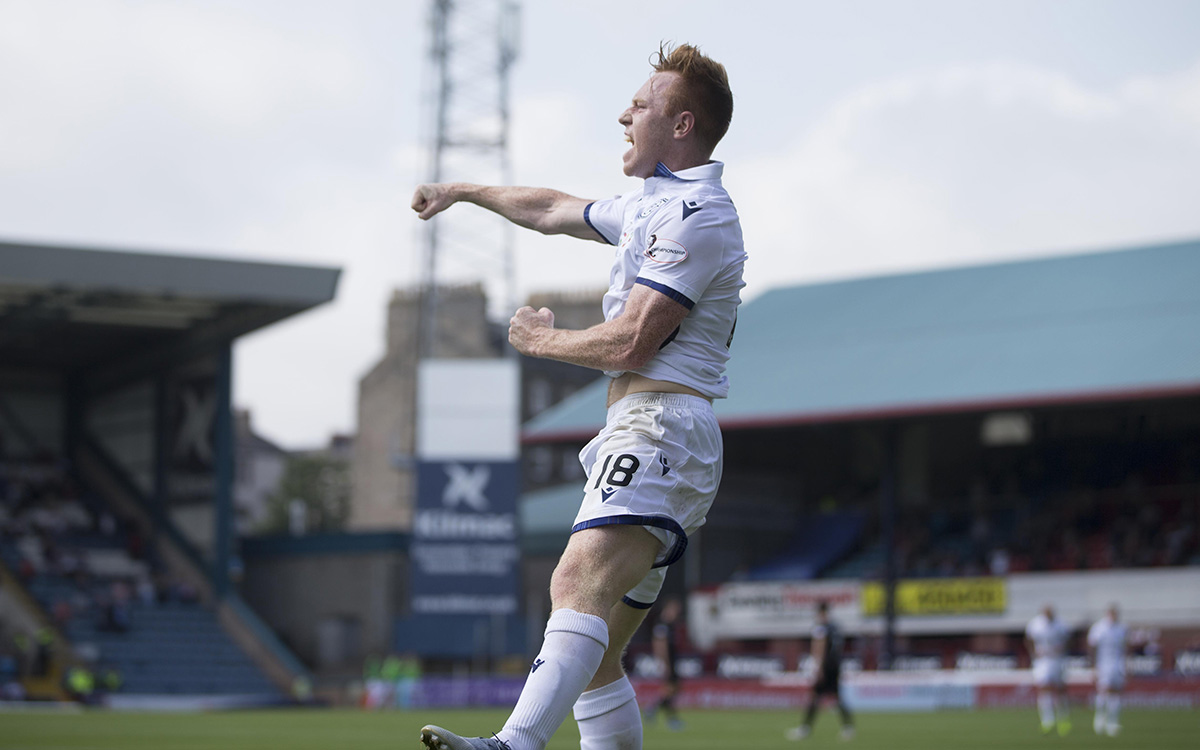 A first half goal on his debut by Danny Johnson gave Dundee a 1-0 win over Inverness Caley Thistle at the Kilmac Stadium at Dens Park. The Dark Blues put in an impressive performance and were more comfortable winners than the close scoreline suggests. Dundee qualify for the Betfred Cup last 16 as undefeated winners of group D without conceding a goal in their four games.

Dundee made two changes from the team that played Peterhead as they switched to three at the back. Jordan McGhee returned to the defence and Danny Johnson made his debut in attack after signing from Motherwell on Friday. James McPake replaced Josh Mulligan and Declan McDaid, who moved onto the bench. Caley Thistle’s only change was to bring Charlie Trafford in for David Carson.

Both the Dee and Caley Thistle created chances in a lively opening that suggested there was little chance of anyone settling for a convenient draw to send the two clubs through to the next round.

A fine Jordon Forster tackle broke up an Inverness attack and the Dee broke quickly for Jordan Marshall to whip a dangerous cross to the far post where Shaun Byrne’s first touch let him down and the chance was lost.

Danny Johnson brought a good save out of Mark Ridgers with a blistering 20 yard shot. The resulting corner was taken short and Fin Robertson beat a man before hammering a shot across goal and just past the far post. Seconds later Jack Hamilton was in action and did well to beat away Keating’s fierce 22 yard effort.

Keatings had a fleeting chance from closer in when the ball broke kindly for him but a terrific Forster block diverted the shot over the bar.

Midway through the first half Johnson passed up a great chance to open his goalscoring account. Paul McGowan and Andrew Nelson set up the chance with a sweet move, but Johnson blazed his shot too high from 10 yards.

Hamilton had to make another good save when Keatings’ 25 yard shot took a tricky deflection, but the Dee keeper readjusted quickly to turn the ball away.

Just after the half hour Dundee opened the scoring with a well worked team goal. Byrne broke up an attack and made room for himself with clever footwork. He sent Marshall down the left and the wing back kept going before switching a pass back to Byrne who quickly played Danny JOHNSON into space to thrash a low angled shot through Ridgers from 12 yards.

Caley Thistle reacted strongly and Keatings found space to hit the side netting with an 18 yard shot. After that minor scare Dundee settled back into control and played some attractive attacking football in the remaining 10 minutes of the half.

Inverness struggled to break Dundee down when they had possession though they did go close with a Keatings free kick, whipped in from the right, that flew over the attacking players and past the far post.

The Dark Blues had the better of the first half and went on to dominate the second half in pleasing style. Dundee really should have added to their lead but the defence was always on top of an Inverness attack that failed to create any worthwhile chances after the interval. Keatings had caused Dundee problems in the first half, lurking behind White, the main striker. After the break Fin Robertson was tasked with sticking close to Keatings, and this slight change largely nullified that threat.

Dundee’s central midfield was particularly impressive in the second half. Byrne and Robertson repeatedly broke up Inverness attacks and combined with McGowan to build good attacking moves themselves.

All the near things came around the away goal. Ridgers did well to hold onto Marshall’s low drive under pressure from Nelson. McGowan poked his shot wide after a lovely Robertson pass gave him space to run into the penalty area. Kerr took advantage of a slip by Tremarco but shot too high when he should probably have passed to Johnson.

Midway through the second half Josh Todd replaced the tiring
Danny Johnson, who departed to a standing ovation after a fine debut.

Todd was soon in the action, combining well with Marshall on the left. A quick Robertson free kick allowed Todd to send Marshall down the left and his low cross flew across goal with Byrne not quite able to reach it at the far post.

Caley Thistle started to push men forward, but to little effect and this simply left Dundee more space. The visitors were further hampered when substitute Mitchell Curry had to leave the game with an injury only a few minutes after he came on. Caley Thistle had used all their substitutes so played the last few minutes with only 10 men.

The Dark Blues should have taken advantage of the extra space and their numerical superiority, but passed up some good openings in the closing stages. Byrne played Todd in on goal but the substitute shot over the bar.

The reaction of the players, especially the defence, at the final whistle showed how much the win and clean sheet meant. Dundee had the edge over Caley Thistle in every area of the park today. The attackers were more dangerous, the midfield excellent throughout and the defence was solid, especially in the second half.

Every Dee played his part today and there were no weak spots. The midfield deserves special praise, however, with 16 year old Fin Robertson giving a remarkably mature performance. He looked as if he had been playing at the heart of the Dundee midfield for years, rather than just a few games, and deservedly won the DeeTV man of the match award.

This is the first time since the 1970s that Dundee have won a League Cup group at the start of the season. Doing so without losing a match or conceding a goal is a sound start to the season and the challenge is now to carry this forward into the league campaign, which starts on Friday evening at Dunfermline.