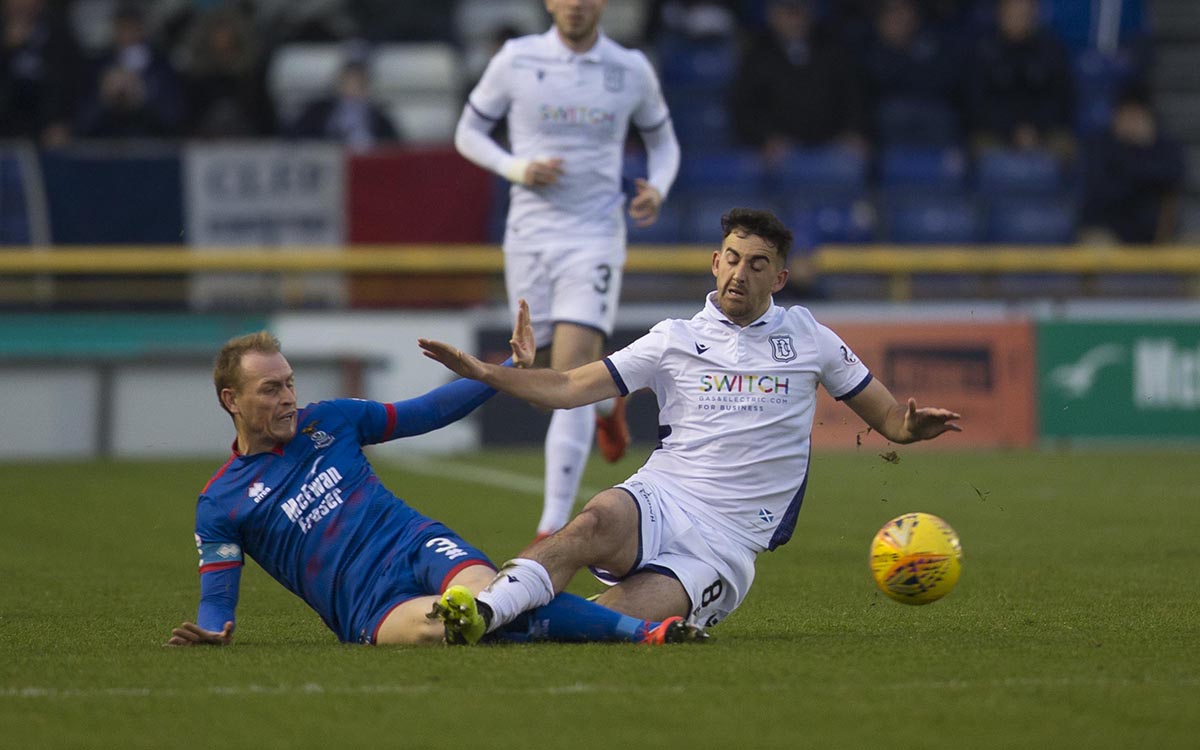 The Dark Blues’ trip to the Highlands ended with a 1-0 defeat at Inverness Caledonian Thistle. Aaron Doran’s early goal was enough to give the hosts victory in a poor game. Caley Thistle rode their luck at times in the first half, but after the break Dundee couldn’t do enough to earn a point.

Both clubs made two changes from their last games. The Dee brought in Josh Meekings and Jamie Ness, with Cammy Kerr on the bench and Andrew Nelson injured. David Carson and Kevin McHattie started for Caley Thistle, replacing James Vincent and Mitchell Curry.

Caley Thistle started the game in busy fashion, attacking eagerly without threatening the Dee goal. Dundee gradually started to build their passing game and looked dangerous when Declan McDaid had the ball wide on the left. Kane Hemmings had a good run from the half way line but a lunging interception by McCart stopped his pass reaching Paul McGowan in front of goal.

After a promising 10 minutes the Dark Blues gave away a soft and messy goal just after the quarter hour mark. The defence got in a mess on the left, allowing David Carson to play a low cross across goal for Aaron DORAN to shoot high into the net from a difficult angle. It was a fine finish, but a completely preventable goal.

The rest of the first half was spent largely in Caley Thistle’s half. Dundee passed the ball around probing for an equaliser with the hosts launching occasional breaks. The Dark Blues were playing some neat football, but not doing it in places that were hurting Inverness. Too many attacks ended without a shot or cross.

Nevertheless the Dark Blues created some great chances and should really have been at least on level terms by the interval. Paul McGowan spun on a cross from Jordan McGhee and his shot from six yards was blocked by Brad McKay. Sean Mackie followed up but Mark Ridgers saved his low shot.

After a prolonged spell of pressure Dundee went desperately close twice in quick succession. Hemmings took McDaid’s pass at the far post but, from a couple of yards out, his shot was blocked by Coll Donaldson. The centre back almost went from hero to villain in that same attack when Graham Dorrans played a dangerous cross back into the goalmouth. Donaldson got in the keeper’s way and nodded the ball back towards his own goal. Carl Tremarco saved Caley Thistle by twisting himself into an acrobatic headed clearance as the ball was about to loop over the goal line.

In the first half Dundee played some decent football while lacking penetration. After the break the Dee were never again able to put Caley Thistle under sustained pressure. When they attacked Inverness were always able to get players back en masse to crowd Dundee out before they could shoot. The Dark Blues couldn’t move the ball quickly enough to forward players on the few occasions when the game was stretched.

After an hour Dundee changed the shape when Danny Johnson and Josh Todd came on for Shaun Byrne and Paul McGowan. The changes failed to provide the service that the strikers needed and the Dark Blues’ attacks fizzled out repeatedly.

Immediately after the substitutions Caley Thistle should have extended their lead but wasted the best chance of the match. Charlie Trafford hoisted a long ball over the top and Doran ran clear. He tried to take the ball round Connor Hazard, but his touch was too light and the Dee keeper grabbed the ball.

Dundee then managed at last to put a fast break of their own together, but Josh Todd pulled a weak shot wide after Hemmings’ run.

In the last 20 minutes a poor game deteriorated further as play was broken up an endless series of fouls. All six bookings came in this spell. Neither side could hold the ball as the game become increasingly messy.

Frustratingly, instead of the Dark Blues staging a late charge to save the game, their challenge fizzled out. Caley Thistle had the better of the last 10 minutes and went looking for a second goal. Doran wasn’t far off target with a curling 25 yard shot at the end of a breakaway. Jordon Forster had to clear a dangerous cross over his own bar and substitute James Keatings went close with a 30 yard free kick. Against that Dundee could only offer a miscued volley by Johnson that flew wide after Todd burst down the left.

Dundee could rightly feel disappointed that they were behind at half time, though that was largely down to slackness at the back and a blunt cutting edge in attack. The second half was a big disappointment. The Dee offered nowhere near enough to claim they deserved anything from a substandard performance in a forgettable match.