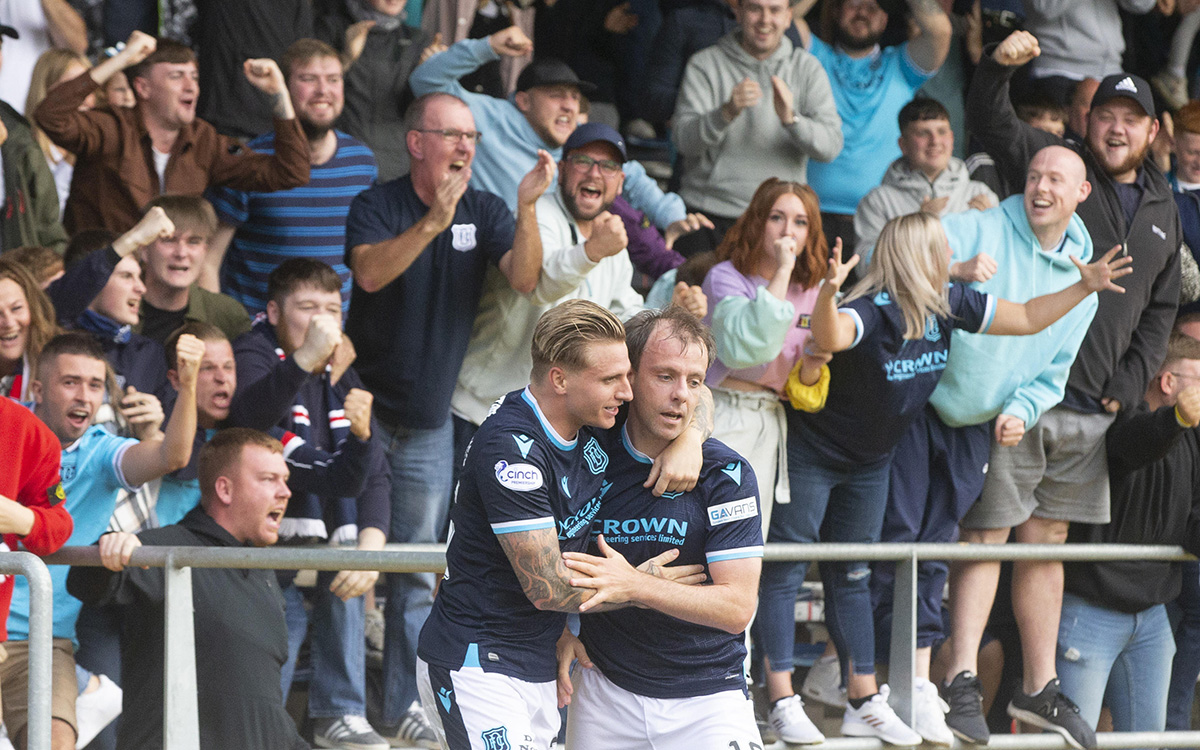 Dundee came from behind to take a point through Paul McGowan’s late equaliser against Hibs in an entertaining 2-2 draw at the Kilmac Stadium. Jason Cummings put the Dee ahead with an early goal against his old club. The Dark Blues looked sure to go in at half time with a lead after being on top for most of the first half. But they were pulled back by a controversial penalty scored by ex-Dee Martin Boyle late in the half. Ryan Porteous gave Hibs the lead after the interval, but Paul McGowan came off the bench to head the equaliser and give the Dark Blues the point they deserved.

Dundee made only one change from the team that beat Motherwell last week. Max Anderson came into the midfield, with Jordan McGhee moving to left back to replace the suspended Jordan Marshall.

Hibs started with promising attacks down each wing, but the Dee defence coped well with the the crosses. When Dundee moved into attack they immediately looked dangerous and soon had Hibs’ defence in trouble.

Paul McMullan and Max Anderson created an opportunity for Charlie Adam from 20 yards. The shot was hurtling for the top corner but a superb save from Matt Macey turned the ball out for a corner.

Hibs cleared the corner only as far as McMullan. His cross flicked off Liam Fontaine and flew across goal inches in front of Jason Cummings’ lunge.

The Dark Blues were roared on by the crowd as they buzzed around the Hibs penalty area and it was no surprise when they took the lead after 11 minutes.

Adam’s low cross from the left was missed by Anderson and reached CUMMINGS in front of goal. The ex-Hibs striker took a touch to give himself a fleeting moment of space and scored from six yards.

Macey again had to save well from a ferocious effort from 20 yards, this time from McMullan who had raced through the middle.

Hibernian had more of the ball, but were using it less effectively than the dangerous Dee. The Hibees gradually worked themselves into the game and Scott sent a glancing header wide. Doig was allowed to run too far, driving into the penalty area. Shaun Byrne’s tackle coincided with Doig’s shot and Adam Legzdins took the ball comfortably.

Referee Mr Muir annoyed the home fans when he failed to play the advantage when McGinn fouled Adam. Luke McCowan had the chance to send Cummings clear, but the referee pulled play back to book McGinn.

The referee was even less popular with the Dees three minutes later when he awarded Hibs a highly dubious penalty. Jamie Murphy got the wrong side of Christie Elliott. There was contact, but outside the penalty area, and Murphy landed well inside. Mr Muir pointed to the spot and Martin BOYLE scored, six minutes from half time.

A corner in injury time almost gave the Dee the half time lead they would have deserved but Macey made another fine save to keep out Lee Ashcroft’s powerful far post header.

The Dark Blues started the second half promisingly with McMullan setting up McCowan to flash a low cross into the goalmouth that Hibs managed to scramblwe away.

The Hibees began to look increasingly dangerous. Scott shot over from 15 yards after Magennis played a Doig cross into his path.

Just before the hour Hibs took the lead. Magennis’s corner from the right reached Ryan Porteous, whose volley from 10 yards beat Legzdins. The Dee keeper got a hand to the ball but couldn’t keep it out.

Hibs were at their best after they went ahead and could have killed off the Dee. Boyle thrashed a left shot well over the bar from Murphy’s cross. The two Hibs players then swapped roles. Boyle’s fast break down the right gave him space to set up Murphy coming in at the far post. Legzidins pulled off a fantastic save to keep the Dee in the game with 15 minutes to go.

Paul McGowan replaced Charlie Adam midway through the second half, and Declan McDaid came on for Max Anderson who limped off after taking an injury in the move that led to Legzdins’s save.

Dundee lacked the zip they had in the first half, but they never gave up and played like they believed they would save the game.

After 83 minutes the Dee took a throw quickly on the left. Paul McMullan floated a lovely cross over the heads of the central defenders for Paul McGOWAN to run in and nod home the equaliser from six yards. Hibs complained that the throw should have gone their way. They had a point, but they still had every opportunity to defend their goal from a simple throw in some 25 yards from the corner flag.

Ryan Sweeney came on immediately after the goal, replacing Liam Fontaine who had taken a knock.

The home crowd had been giving the players enthusiastic backing, and they got right behind the Dee as they pushed for a winner. McGowan had a go from 18 yards, but his effort was too high.

Yet again we were treated to a game that both teams wanted to win, as the two sides traded attacks in the four minutes of injury time. Hibs went closest when Legzdins parried Boyle’s fierce cross shot, with the ball striking Gogic and rebounding into the arms of the relieved goalkeeper.

Over the full match a draw was fair. Dundee had the better of the first half and Hibs were on top for most of the second half. The Dark Blues kept fighting and even when they seemed to be tiring they always looked capable of creating chances that would get them back into the game.

Again there was much to enjoy in the Dark Blues’ performance. They are playing fast, entertaining football under James McPake with the wide players being used well and midfielders working hard to get forward into dangerous positions. The appreciative applause from the home supporters at the end showed that the fans believe the team is on the right track.