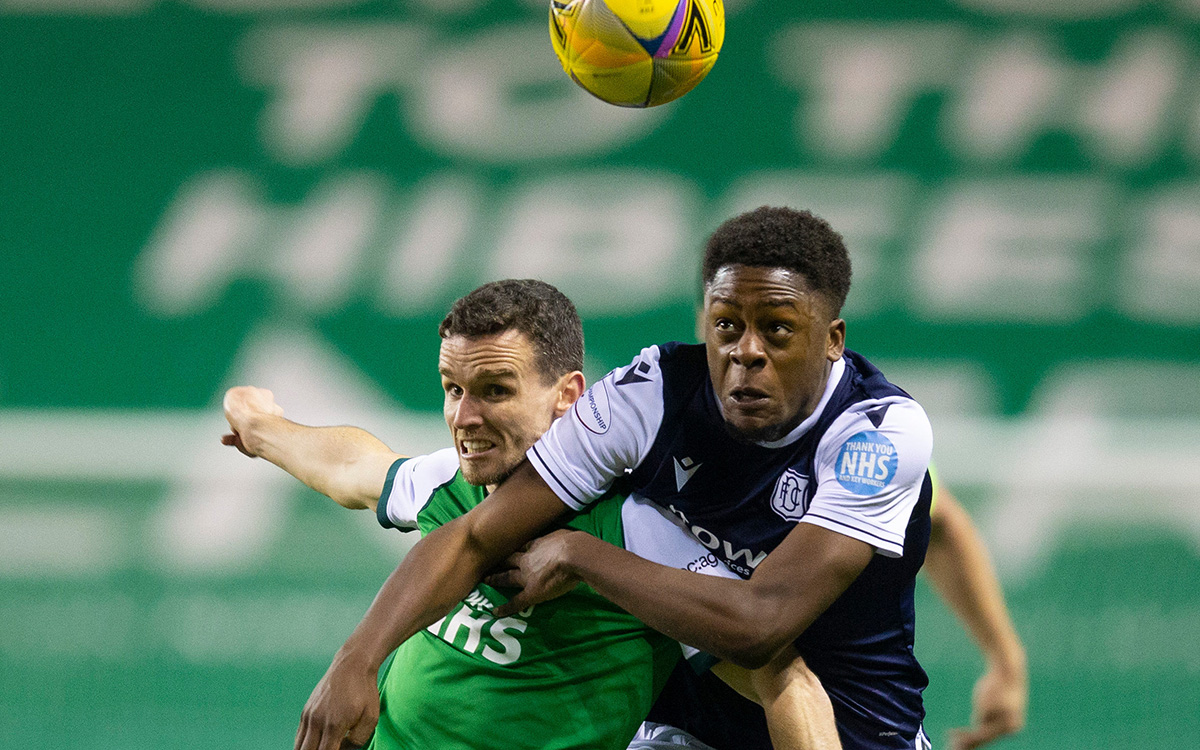 Dundee were knocked out of the Betfred Cup in the last 16 tie at Easter Road this afternoon. Hibs won 1-0 thanks to Jamie Murphy’s goal at the end of a first half in which Dundee had the edge. Hibs capitalised on their goal and improved after the break, ensuring that there was no way back for the Dee.

The Dark Blues made four changes following the defeat at Ayr. Jack Hamilton returned in goal, replacing the injured Adam Legzdins. Jonathan Afolabi came back into the starting line-up, while Liam Fontaine and Alex Jakubiak had their first starts for the Dee. Cammy Kerr, Jordan McGhee and Osman Sow moved onto the bench. Hibs also made four changes from the team that beat the Dee in the group stages a fortnight ago. Ofir Marciano, Ryan Porteous, Sean Mackie and Christian Doidge replaced Dillon Barnes, Paul Hanlon, Josh Doig and Drey Wright.

Hibs played the first few minutes in the Dundee half and had an early chance when Darren McGregor failed to make effective contact with a corner and the ball flew off his foot and over the bar.

Jack Hamilton saved well from Kevin Nisbet’s shot on the turn, and did even better to keep out Christian Doidge’s follow up, though the Hibs’ striker was flagged for offside anyway.

Once the Dark Blues settled into the game they started to dominate in midfield, playing the more patient, controlled football. However, despite numerous good passing moves from the middle of the park Dundee couldn’t create any real chances. Ofir Marciano didn’t have to make any saves at the end of any of Dundee’s attacks.

Hibs might have been mostly stuttering and ineffective in midfield, but they were still able to play the more dangerous balls into the penalty area. Lee Ashcroft twice had to be alert to defend against awkward, low crosses to the near post. Kevin Nisbet fired over from 18 yards, and should have done better five minutes from the interval. Martin Boyle screwed a low cross from tight on the byline against the outside of Jack Hamilton’s post and Nisbet thrashed the rebound high over the bar.

Nisbet made amends three minutes later with a clever turn and pass on the half way line to send Jamie MURPHY running clear into the penalty area and shoot across Hamilton, inside the far post for the only goal of the game.

Dundee were unfortunate not to equalise early in the second half when Lee Ashcroft backheaded Liam Fontaine’s long throw to the near post. Alex Jakubiak’s flick came back off the crossbar and the Dee striker tucked the ball into the net only to be judged offside, a close decision.

The escape sparked Hibs into life and they raced up the field to create the sort of instant danger that Dundee struggled to match. Boyle hammered a low cross into the goalmouth where Ashcroft did well to clear from almost on the goalline.

Hibs remained on top and Dundee struggled to play their way into dangerous positions. Whenever the Dark Blues had the ball Hibs always had their men in place to cut off passes, or crowd out attackers. Hibs might have been showing more energy and urgency than in the first half, and their extra pace in attack meant they found space more readily than the Dark Blues, but their final balls weren’t good enough to create serious danger to Jack Hamilton’s goal until late in the second half.

Drey Wright came on as a substitute after 80 minutes and was immediately on the end of the best move of the half from either side. Boyle raced in from the right and slotted a pass through for Wright to take a touch and shoot from 15 yards, but Hamilton denied him with a superb save.

Dundee made two substitutions in the second half, sending on Declan McDaid for Max Anderson, then Osman Sow for Jonathan Afolabi. Neither changes affected the pattern of the game and the Hibs saw out the game fairly comfortably with Marciano still not being called upon to make any saves.

Dundee were certainly tighter in defence and much more confident at the back than in recent games. However, the neat passing in midfield never opened Hibs up and the strikers didn’t have a clear shot in open play. Set pieces were more promising and Hibs’ occasionally scrappy defending from free kicks and long throws offered hope that someone in dark blue might find a chance. It never happened, and Hibs did enough to deserve their place in the quarter finals.