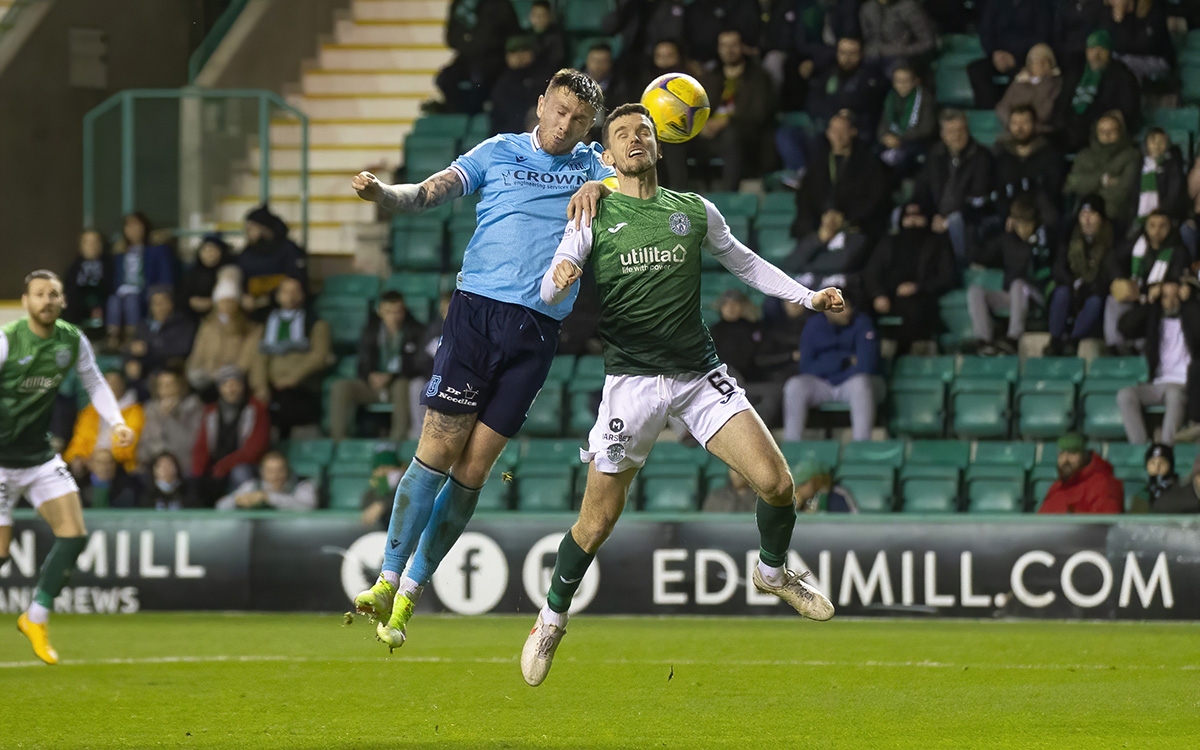 The Dark Blues went down to a 1-0 defeat against Hibernian at Easter Road this evening. Paul McMullan’s unfortunate own goal in the first half was enough to give Hibs the points from a game with few chances. A disappointing night for the Dee was capped with a red card for Ryan Sweeney in the dying seconds.

The only change to the Dee’s starting line-up was that Jordan McGhee retained his place at the expense of the injured Charlie Adam, whom he replaced on Saturday.

Martin Boyle, playing in a central striking role, was Hibs’ main man in the early stages. In possession he was always a threat and Ryan Sweeney was booked for pulling the ex-Dee back. Liam Fontaine was also forced to foul Boyle as Hibs tried to get off to a fast start.

In spite of Hibs’ early pressure it was the Dark Blues who had the first shot on target. A free kick broke to Paul McGowan 20 yards from goal and his controlled volley brought a decent save from Matt Macey, though the keeper would have been embarrassed if he had failed to stop it.

The Hibees had more of the ball and did most of the attacking but the Dundee defence held firm for the first half hour and prevented the home side creating any good chances.

The Dark Blues played some neat football in attack, but there was no end product and they could not call Macey into action again in the rest of the first half.

After 34 minutes Hibs took the lead following a fast break down the right by Boyle. His cross was heading for Nisbet but Paul McMullan flung himself into an attempted interception. The unfortunate outcome was a spectacular own goal as his header flew past Legzdins into the top corner. It was a cruel reward for McMullan’s willingness to work hard racing back to cover.

Hibs grew in confidence and enjoyed their best spell of the half after the goal. Christian Doidge had come on as a substitute and played a clever pass through the Dee defence. Kevin Nisbet rounded Legzdins but his shot from a tight angle was blocked by Fontaine.

Dundee started the second half well with Max Anderson prominent, building attacks with some clever football. The Dark Blues should have equalised when Jake Doyle-Hayes made a hash of Cammy Kerr’s cross. The ball broke to Danny Mullen, but the striker swiped his shot over the bar from close range.

Mullen had a more difficult chance, no more than a half chance, at the end of the Dee’s best move of the game. Anderson and McCowan combined well on the left but Mullen scuffed his shot.

With 55 minutes gone that was Dundee’s last dangerous and penetrating move. The Dark Blues mounted plenty of attacks, but they could never get into dangerous positions, or trouble the Hibs defence with their final passes and crosses.

Hibs passed up a great chance midway through the second half when Boyle burst clear down the right. Substitute Jamie Murphy was clear in the middle. Boyle’s low cross carried a shade too much pace for Murphy who was forced to take a touch, which gave Legzdins time to smother the shot.

Dundee brought on Jason Cummings and Leigh Griffiths for Paul McMullan and Max Anderson, who had taken a knock. The three Dundee strikers saw little of the ball as the attacks petered out before reaching the penalty area.

Hibs were happy to keep the game tight and protect their clean sheet. Disappointingly they were able to close the game out comfortably.

The only talking point in the three minutes of injury time was a foolish red card for Ryan Sweeney. With only a few seconds left on the clock the referee penalised Kerr for a foul throw in the Dundee half. It would have been perfectly acceptable for a supporter to tell the referee it was a petty decision but decidedly unwise for a player to do so. Nevertheless Sweeney passed a comment to that effect. He duly received a second yellow card. The red card that inevitably followed gives Dundee an unwanted extra defensive problem for Saturday’s match.

Tonight Dundee lacked the creativity in attack that they showed in Saturday’s game at Ross County. They lost that game through defensive mistakes. The Dee defended much better tonight, but they offered little attacking threat. Dundee will need to find a way to overcome injury and suspension problems and put together a more rounded team performance.