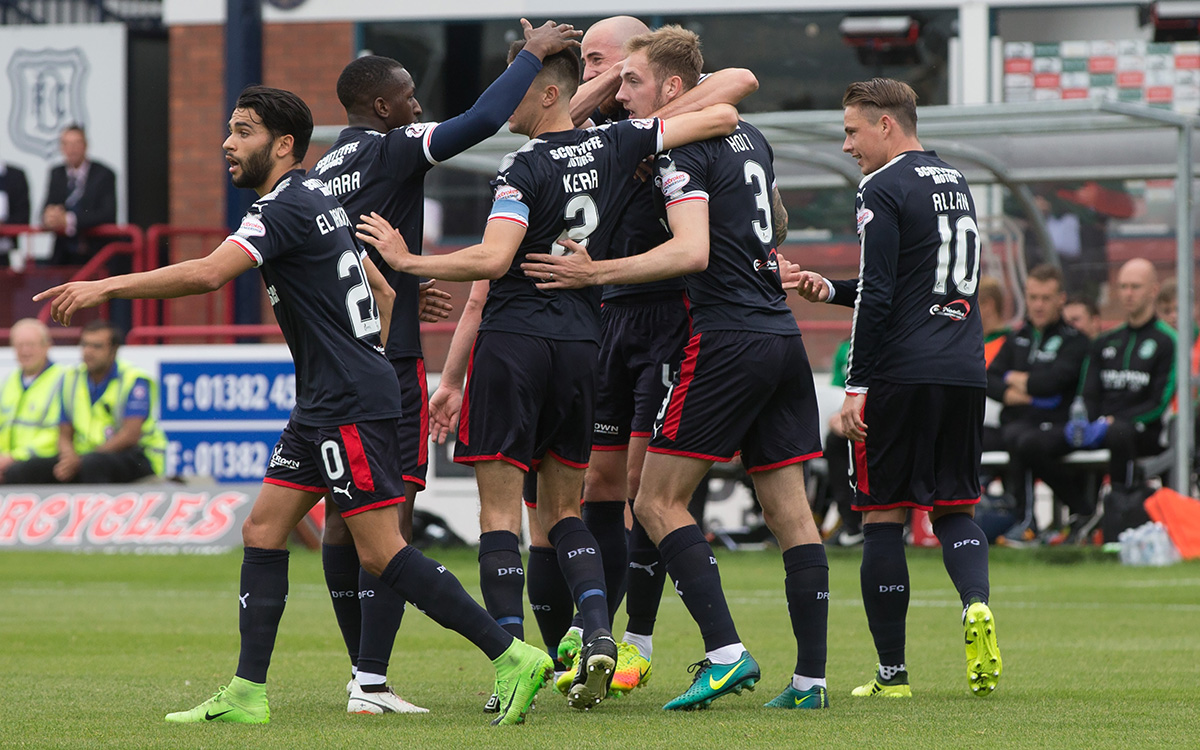 A 1-1 draw at home to Hibernian gave Dundee their first point of the season and allowed them to move off the bottom of the table before the start of the international break. An early Kevin Holt penalty put the Dee ahead. Anthony Stokes equalised late in the first half and although Hibs went on to dominate possession Dundee held on for a draw.

The game started at a fierce pace with both teams keen to gain an early advantage. Hibs’ Brandon Barker tested Scott Bain with a low shot from 20 yards but the Dee keeper saved well.

Roarie Deacon had already given notice that he’d be a threat to the left of Hibs’ defence before he won the penalty that gave the Dark Blues a breakthrough after eight minutes. Glen Kamara sent a wonderful pass out to the right for Deacon to take the ball, race into the penalty and cut inside Steven Whittaker, whose late tackle brought him down. Kevin HOLT hammered the spot kick low past Marciano to give the Dee the lead.

Dundee continued to look capable of worrying Hibs’ defence, when they had the ball. However, for the rest of the first half the visitors had most of the effective possession and the Dark Blues were largely restricted to attacking on the break.

Hibs won nine corners in the first half, which were all handled well by Dundee’s youthful defence. Hibs tried numerous variations. None of the short corners paid off. The inswingers were all taken by Bain, and those flighted further out were cleared by the defence.

Hibs were more of a threat from open play and Bain again had to save from a long range shot by Barker. Sloppy play in the Dee midfield allowed Hibs to break, but Anthony Stokes’ shot was turned round the post by Bain.

A great cross by Scott Allan found Holt free beyond the far post, but his header was straight at Ofir Marciano.

Man of the match Scott Bain was right at the top of his form in the Dundee goal, and excelled himself with a close range save from Simon Murray. Stokes’ 25 yard shot was deflected neatly into the path of the former Arbroath striker. Bain should have been left without a hope, but his superb reflexes allowed him to touch the ball out for a corner.

The equaliser was not delayed for long, and six minutes from the interval STOKES met Whittaker’s low cross six yards out at the near post, with the ball flying off Kerr Waddell and into the roof of the net. This time Bain was left helpless by the pace on the ball and the deflection.

Dundee’s inexperienced central defenders had another fine game, but an uncharacteristic mistake by Jack Hendry early in the second half almost cost a goal. Under pressure Hendry should have launched the ball into Sandeman Street, but lost the ball as he tried to play his way out of trouble. Murray should have scored but spooned his effort high over the crossbar.

In Hibs’ slickest move of the match Marvin Bartley swapped passes with Stokes and tried to clip the ball over Bain, who saved at the expense of a corner. Again Hibs could make nothing of that and John McGinn’s powerful follow-up shot from 25 yards failed to trouble Bain.

All through the match Dundee were hampered by the lack of a lead striker, capable of battling the central defenders and bringing the supporting players into the game. Paul McGowan did his best in that role, always working hard, making a nuisance of himself, but it is far from his natural game. Just before the hour Randy Wolters came on for James Vincent. McGowan moved back a holding role, Faissal El Bakhtaoui took over as the sole striker and Scott Allan moved into the hole behind him. Again El Bakhatoui gave everything, but it wasn’t his day.

Stokes rode his luck when he angrily barged Bain to the ground, feeling he had been obstructed by the Dee keeper. Referee Don Robertson decided the offence was worth only a booking, and Stokes stayed on the park where he continued to cause Dundee problems by dropping deep and drifting out to the left.

Hibs best chance in the later stages followed a fast break by Dundee. Scott Allan’s pass was intercepted and Hibs counter-attacked equally quickly. McGinn played the pass of the match to send Barker clear, but he hesitated so long that Bain was able to grab the ball. Stokes had Hibs next chance; it was far harder than Barker’s but forced a better save. He did well to squeeze in an angled shot, but Bain got down well at his near post to keep the ball out.

El Bakhatoui went very close with a run and shot from 20 yards, but in the last 10 minutes Hibs looked like the only team likely to break the deadlock. Stokes seemed to lost sight of a cross, but the ball came off the back of his head and missed narrowly. Scott Bain was called upon one last time, comfortably dealing with Stokes’ effort from 30 yards.

The Dark Blues were far from their best today. Indeed they played better in last week’s defeat at Aberdeen. However, considering the dreadful injury problems, with all the experienced central defenders and all the strikers being unavailable the players deserve credit for the way they stood up to the challenge. The players worked hard, the team was organised, and everyone showed a great attitude and fighting spirit to overcome adversity. At the end the supporters showed their appreciation of these qualities, which earned the Dee their hard fought point.