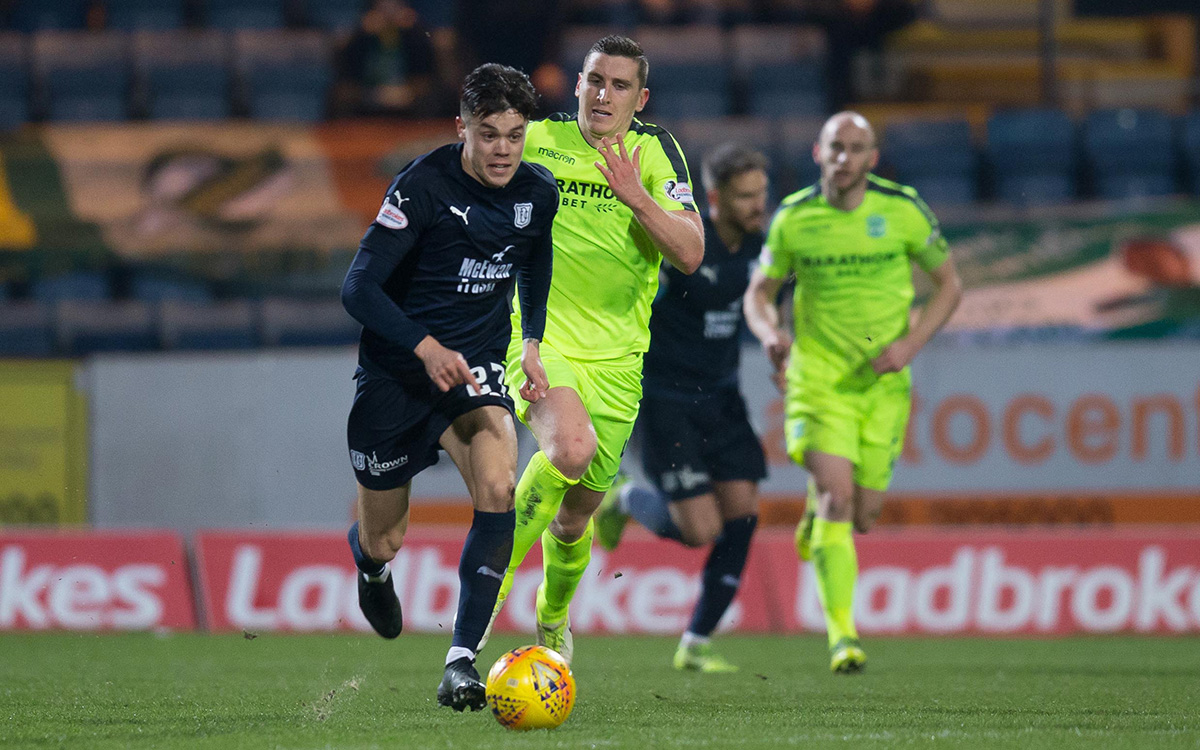 Dundee lost 4-2 to Hibs in a very open and entertaining game at Dens tonight. The Dark Blues paid a heavy price for defensive errors that gave Hibs a 2-1 lead at half time with goals from Florian Kamberi and Mark McNulty. Paul McGowan equalised for the Dee between those goals. The game was settled midway through the second half through two moments of magic by Stevie Mallan who set up the third for McNulty and then scored a superb fourth. Although Dundee fought back strongly with Kenny Miller having two goals disallowed for marginal offside decisions they could pull only one goal back through Martin Woods. The Dee played some good football tonight, but poor defending meant they took nothing from the game.

The Dark Blues had two changes from Saturday’s win at Livingston. Jesse Curran came in for the injured Andrew Nelson and Paul McGowan replaced Andreas Hadenius, who was on the bench. Hibs were unchanged after beating Hamilton at the weekend.

The game got off to slow start with some neat play by Dundee in the build up, but no hint of an end product. It took quarter of an hour for either team to have a shot. The first one came shortly after when Scott Wright’s long range effort was deflected into the path of Jesse Curran who shot narrowly wide from 16 yards. From then till the final whistle the action was relentless.

Hibs had been running offside regularly but Stevie Mallan beat the offside line wide on the left. He ran on to shoot from a difficult angle and Seny Dieng saved. Dundee had a good claim for a penalty when Mark Milligan manhandled Ryan McGowan at a corner but the referee was unimpressed.

Hibs took the lead slightly against the run of play when Florian KAMBERI muscled Genseric Kusunga off McNulty’s through ball and shot past Dieng. Kusunga may have felt he was fouled, but he was ahead of Kamberi and had the chance to clear without having to rely on the referee’s assistance.

The visitors visibly relaxed and started to play with increased confidence and purpose. Dieng had to save well from McNulty after the new Hibs striker controlled Slivka’s pass and spun before shooting.

It took the Dee only eight minutes to equalise, and again this was against the run of play. Scott Wright dribbled in from the left wing and although he seemed to be crowded out by a posse of Hibs players he managed to play a superb ball into the goalmouth where Paul McGOWAN, with his back to goal, steered the cross past Marciano from five yards. The Dark Blues were down to 10 men at this point as Craig Curran was off the park having stitches put in a cut above his eye.

Disappointingly Dundee quickly fell behind again with another badly defended goal. There was a collective loss of concentration at a throw in and Daryl Horgan was allowed to run clear on the left. He hammered a low ball across goal to the far post where McNULTY had lost his marker, Kusunga, and couldn’t miss from only a couple of yards.

Dundee started the second half on the front foot but couldn’t fashion clear chances as they pressed Hibs back. The game became increasingly open as Dundee started to push men forward and Hibs had repeated opportunities to break. The game was very much in the balance as both teams looking capable of scoring. 10 minutes after the restart Kenny Miller came on for Craig Curran.

Hibs’ willingness to attack allowed Dundee to create two good chances with fast breaks. Paul McGowan sent Andy Dales away on the left and he ran on for 40 yards, cut inside and Ofir Marciano had to pull off a great save to turn the fierce shot away for a corner. Jesse Curran also ran 40 yards through the middle as Dundee again broke at speed. He sent Scott Wright into the penalty area but a heavy touch allowed Marciano to grab the ball at the second attempt.

The game was settled by two moments of high quality from Stevie Mallan in the middle of the second half. He burst through the middle, opening up the Dundee defence before unleashing a rocket from 18 yards. Dieng did will to get his hands to the ball but the rebound went straight into the path of McNULTY who only had to run into the ball to send it rolling into the net.

Before the game restarted Dundee sent on Ethan Robson and John O’Sullivan for Paul McGowan and Andy Dales. They didn’t have any time to get involved before Hibs went 4-1 up with a superb goal by Stevie MALLAN. He was allowed too much space, and from 30 yards he hit a screamer across Dieng and into the top corner.

Dundee had the ball in the net only two minutes later when Miller headed in Martin Woods’ free kick, but was denied by the assistant referee’s flag – surely a very close decision. Miller then had another headed goal disallowed when he turned Jesse Curran’s cross into the net – again a debatable call.

Finally the Dark Blues scored the goal they deserved and it was another beautifully crafted move. John O’Sullivan played a good cross in for the left. Martin WOODS worked a quick one-two with Kenny Miller, and smashed his shot past Marciano from eight yards.

Hibs, meanwhile, had hardly been sitting back and attacked menacingly whenever they got the ball. As Dundee tried to claw their way back into the match they left plenty of space at the back, especially down the wings where the full backs were pushing forward.

Surprisingly there were no more goals as play raced from end to end. There were six goals tonight, but we could easily have reached double figures. The loss of Andrew Nelson was a huge blow but Dundee still carried plenty of goal threat, even without him. The real problem was at the other end where defensive errors allowed Hibs to get their noses in front. Once they were in the lead Hibs could exploit the space Dundee left and in Stevie Mallan they had a player with the quality to ensure the points headed back to the capital.

The Dark Blues were not as bad as the score suggests, but they can’t expect to get anything in the Premiership if they are open and careless at the back. These errors undid some very good work in attack. Earlier in the season Dundee might have folded when Hibs ran into a 4-1 lead. Tonight Dundee fought back well, and with a bit of luck, if tight decisions had gone their way, the final score would have been much closer.