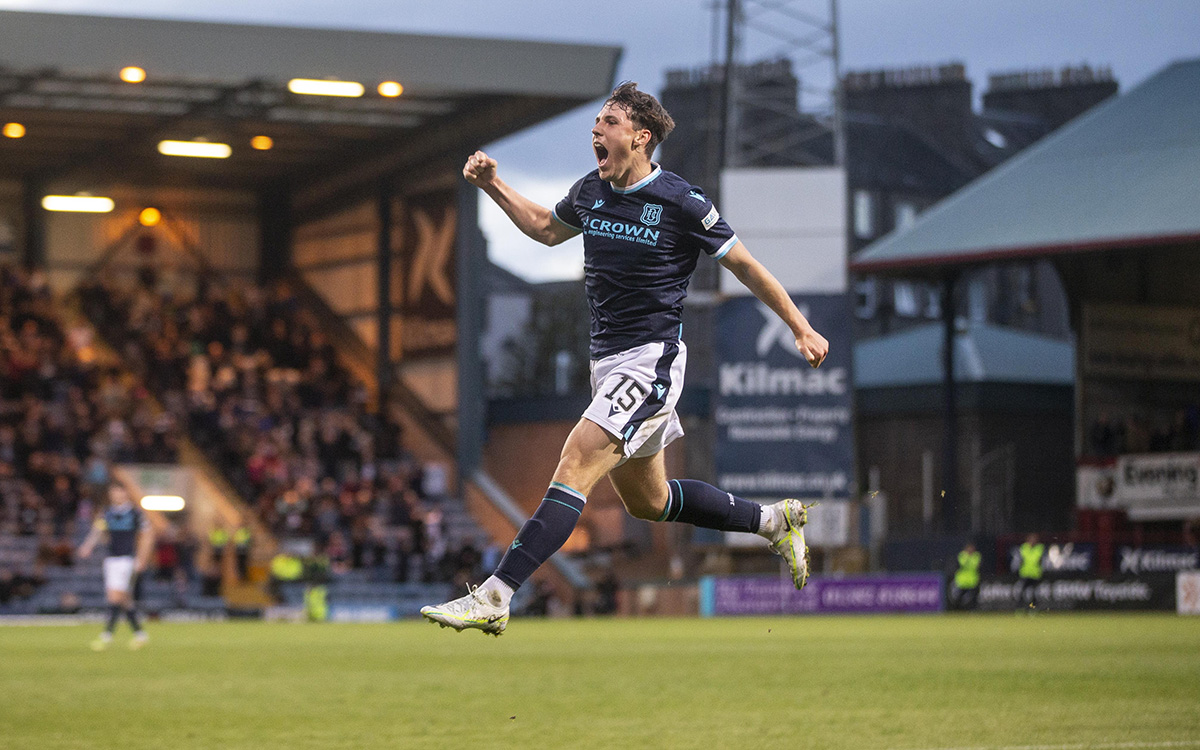 Dundee put in a terrific fighting performance to beat Hibs 3-1 tonight at the Kilmac Stadium tonight and keep alive their hopes of avoiding the drop for another 24 hours at least. Niall McGinn gave the Dee an early lead only for James Scott to equalise before half time. The match was transformed by the arrival of Charlie Adam from the substitutes bench. Hibs couldn’t handle the Dark Blues ferocious attacking and Josh Mulligan headed the second goal. The Hibees goal had a series of narrow escapes before Charlie Adam sealed the points with a sensational long range drive.

Mark McGhee made four changes to the team that lost in Paisley on Saturday. Josh Mulligan, Shaun Byrne, Max Anderson and Paul McMullan started, replacing Paul McGowan, Charlie Adam and Luke McCowan, who were named as substitutes, and Danny Mullen who was unavailable through illness.

The Dark Blues gave the fans a lift with a goal after only three minutes. Jordan Marshall played a fine long pass that gave Zak Rudden space to shoot from 18 yards. Matt Macey saved well, but Niall McGINN was quickest to follow up and shot into the empty net.

Dundee rode their luck for a while after that. Hibs’ runners were not being tracked effectively and they were finding space between the centre backs and the full backs. Harry Sharp pulled off a good save from James Scott after neat footwork by the Hibs striker allowed him to shoot from 12 yards. Harry Clarke headed just wide from a deep cross by Josh Doig. Clarke was then played into space down the left by Lewis Stevenson and Cammy Kerr did well to block the low cross as before Scott could turn the ball in.

Dundee looked capable of getting through the Hibs defence but too often they gave the ball away cheaply before they could build dangerous attacks.

The Dee’s luck in defence ran out after 28 minutes. SCOTT beat Jordan McGhee far too easily on the right touchline, ran in on goal and Sharp could not keep his fierce shot out.

Cammy Kerr almost caught out Macey with a cross that took a slight deflection and flew over the keeper’s head, narrowly missing the far post.

Late in the half Dundee fans thought the Dark Blues had regained the lead when Josh Mulligan headed a McGinn free kick powerfully into the net off the crossbar, but the youngster’s celebration was ended by the assistant referee’s flag for offside. It looked a very harsh decision.

Hibs started the second half on top but couldn’t turn possession and pressure into clear chances. The nearest they came was when Ryan Porteous’s header from a corner struck a defender, flying across goal and past the far post.

Dundee gradually worked their way back into the game and put together some promising attacks. The tide was already starting to flow the Dee’s way when Charlie Adam and Luke McCowan came off the bench after an hour, replacing Shaun Byrne and Paul McMullan.

The changes gave the Dee a surge of energy and confidence. Charlie might not have been doing much running himself, but he was hitting passes into space behind defenders that the younger players could race onto. Suddenly Dundee players were racing past the Hibs defenders.

After 68 minutes Dundee were back in the lead. McGinn and Marshall combined cleverly on the left. Marshall crossed deep beyond the far post and McCowan headed back for MULLIGAN to head home from close range.

The young midfielder was desperately unlucky not to add to his tally as the Dark Blues threatened to blow Hibs away in a spell of blistering attacking.

Adam’s long pass allowed Rudden to cut inside and his shot struck a defender and ricocheted out for a corner. Adam hit a deep corner for McCowan to head back into the goalmouth where Mulligan’s header was cleared off the line by Clarke. At the next corner Charlie Adam went straight for goal, whipping in a fierce curling delivery. Macey only just reached it in time, pulling it back from almost over the goalline. Mulligan followed up, but his shot was again cleared off the line.

Zak Rudden passed up a good chance when he spun into space but shot wide. Another early Adam pass behind the defence almost set up McCowan for a close range chance, but he couldn’t quite reach the ball.

Hibs had been doing their share of attacking, but without the conviction that Dundee had found and they always looked vulnerable when Dundee flew back at them. Their nearest effort was a shot, or driven cross, from Clarke that Sharp did well to push away.

The game was settled by the third goal that Dundee deserved, and what a magnificent score it was. Cammy Kerr had burst through a tiring Hibs midfield before being stopped on the edge of the penalty area. The ball broke to Charlie ADAM and from 30 yards he hit an unstoppable curling shot past Macey with the outside of his magical left foot.

Dundee made sure there was no way back for Hibs after that. Every attempted Hibs attack ran into a Dark Blue wall as the supporters cheered the players to the final whistle.

This win might well not be enough to save the Dee, but the players did all that was asked of them in this game and ensured that Dundee would not be relegated tamely at Dens. This was a highly entertaining game throughout, and the last 30 minutes were a real joy to watch.

It was a fine Dee team performance, but young Josh Mulligan deserves a special mention for his relentless effort and energy, his determination to drive forward, and for his goal threat. He will always remember his first league goal, but he was so unlucky that he was able to claim only one.

Dundee are still favourites to finish bottom, but the team lifted the spirits of the support tonight with this hugely enjoyable win, the first under Mark McGhee.