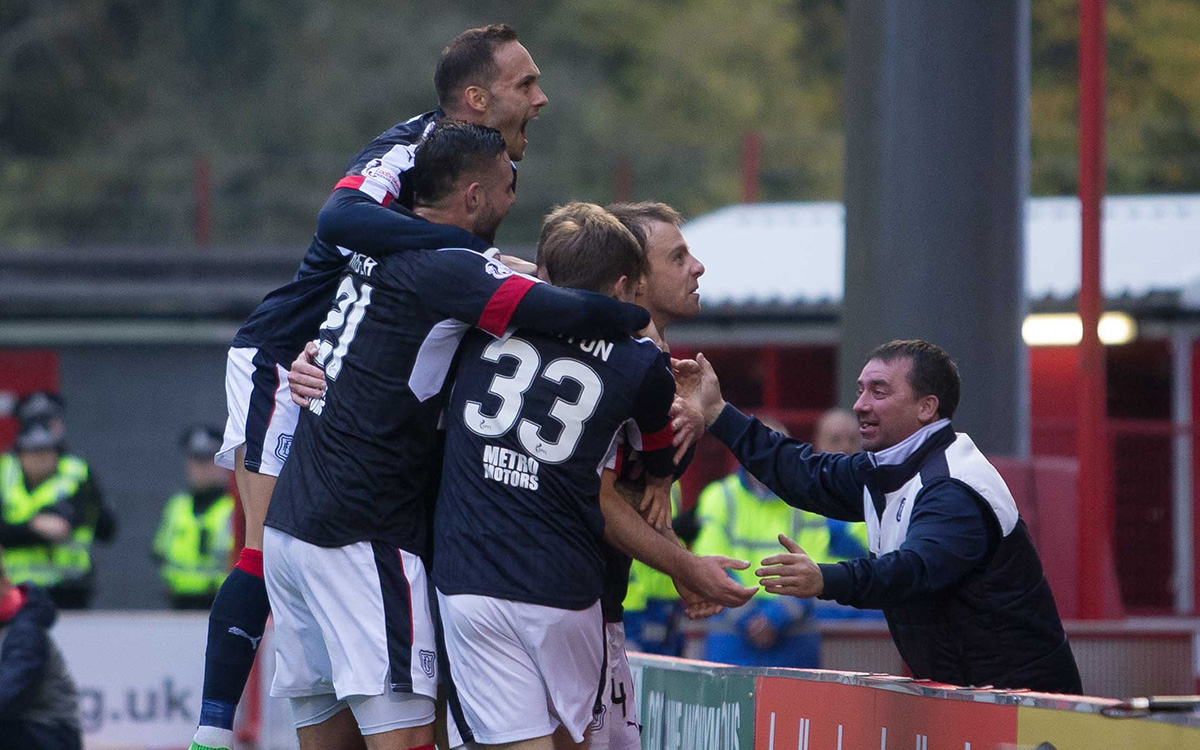 Dundee returned from Hamilton’s SuperSeal Stadium with a vital three points after an excellent team performance gave them a well deserved 1-0 victory. Paul McGowan scored the only goal after 61 minutes and there was no route back for the Accies against a spirited and hard working Dee.

Dundee made four changes after the midweek defeat against Partick Thistle. Scott Bain was missing with a groin strain and David Mitchell made his first start of the season in goal. Julen Etxabeguren and Kosta Gadzhalov came into the back three as the Dark Blues reverted to a 3-5-2 formation, and James Vincent returned in central midfield. Kevin Gomis, Danny Williams and Rory Loy dropped out of the starting 11. Not surprisingly Accies were unchanged after beating Aberdeen on Tuesday.

Accies gave the Dark Blues a fright by creating and missing their best chance of the match inside 30 seconds. Grant Gillespie’s run down the right set up Ali Crawford, who scooped his shot well over the bar from 15 yards. Dundee soon went close themselves when Julen Etxabeguren’s header from a Tom Hateley corner narrowly missed the post.

The more composed football was coming from the Dee who were pressing, moving and passing well. Dundee should have opened the scoring after James Vincent won the ball deep in the Dee half. He made space well and released Craig Wighton, who raced clear of the defence and ran 50 yards before slipping tbe ball past Gary Woods’ near post.

Accies were largely restricted in the first half to long range efforts, none of which were on target. All that David Mitchell had to do before the interval was to catch a corner and deal with occasional back passes.

Dundee put together some good, promising moves later in the first half but couldn’t find the right final ball to set up clear chances. Accies, on the other hand, were struggling to build moves and were let down by a succession of aimless passes.

The second half continued in a similar fashion with the Dark Blues still looking the more composed and dangerous side. Greg Docherty had an early 20 yard effort that Mitchell took comfortably, his first and only real save of the match. Julen Etxabeguren went close for the Dee, forcing a fingertip save from Woods with a powerful header from a Hatelely free kick.

There was a fleeting moment of danger at the Dee end when Docherty turned on Crawford’s corner, but Mitchell pounced on the ball.

At last, after 61 minutes, Dundee got the goal they deserved. Holt’s cross from the left was half cleared and from 20 yards Paul McGOWAN scored with a low shot that Marcus Haber dummied over to leave Woods helpless.

Hamilton had their best spell of the match for a few minutes after the goal, but Dundee continued to defend well and in the rest of the game David Mitchell didn’t have to make a save as Accies, for all their efforts, were not allowed any chances.

After that brief flurry from Hamilton the Dark Blues started to settle on the ball again. Paul McGowan was struggling with a knock and had to be replaced by Nick Ross after 77 minutes, but Dundee continued to have the better of the midfield battle. The longer the game went on the more comfortable Dundee looked, and the more Hamilton struggled. Accies ran out of ideas long before the end and it was the Dark Blues who came closest to scoring again.

Kevin Holt burst down the left and moved the ball on for Marcus Haber, whose low, angled shot was brilliantly saved by Woods, with Wighton’s follow up shot blocked by Lennard Sowah.

The four minutes of injury time passed with a pleasing lack of thrills and at the final whistle Dundee were holding the ball deep in Accies’ half. It wasn’t a slick or pretty performance, but today we saw a fighting, well organised Dark Blue team that rolled their sleaves up and fought for the win they fully deserved. With both teams fielding similar formations it was vital that the Dee players won their individual battles, and today they did just that.

A clean sheet for David Mitchell and his defence was particularly pleasing. The midfield worked furiously to take control and played some good, penetrating passes to cause Accies defence problems. Marcus Haber made an important contribution with his strength and ability to win the ball in the air and Craig Wighton benefited from the opportunity to play off a big, strong striker.

After six successive defeats and a long run of 10 games without a win this victory was greeted with delight by the travelling supporters. Paul Hartley, all the players and staff on the bench joined the players in a huddle in front of the away stand at the end and then thanked the fans for their support.