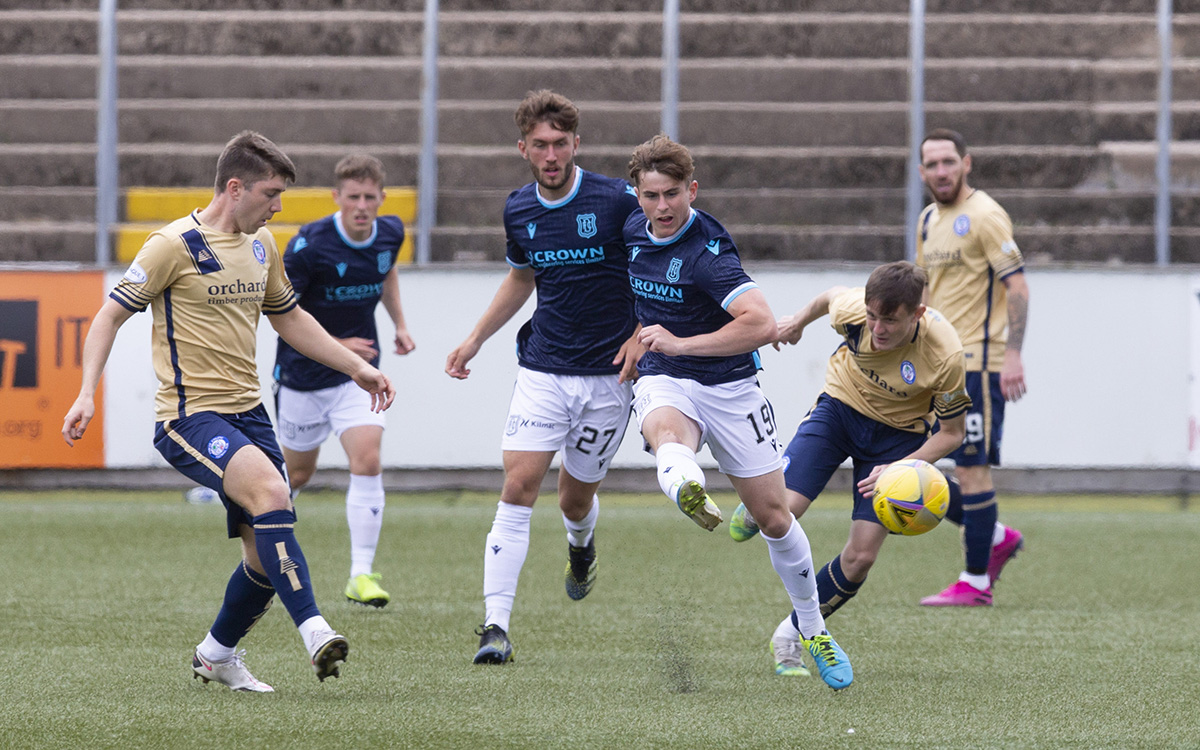 Dundee opened their pre-season friendly campaign with a 3-0 victory against Gary Irvine’s Forfar Athletic at Station Park. The goals came in a six minute early in the second half, from Danny Mullen, Paul McMullan and Luke McCowan. All three players had Charlie Adam to thank for a superb set of assists. The Dark Blues used 22 players today, with two completely different teams in each half and no in-play substitutions.

The Dark Blues fielded Luton’s Corey Panter as a trialist in the second half, and Forfar had two of the Dee youngsters in their squad. Luke Strachan played the first half and Danny Strachan the second half. Both were classed as trialists.

The Dee started brightly but it was the Loons who threatened to score first. Forfar worked Craig Thomson into space on the right and he ran in to shoot. Adam Legzdins saved with his feet and the Dee scrambled the ball clear.

Dundee responded with a fast attack, Jordan Marshall swinging a long crossfield pass to send Lyall Cameron away. He set up Jordan McGhee but his powerful shot from 15 yards was well saved by keeper Marc McCallum.

The Dee dominated possession and were doing most of the attacking, but the Loons looked dangerous on the break and some of their moves and crosses kept the Dundee defenders on their toes.

The Dark Blues switched off at a corner to allow Matthew Aitken a free header, but he hit the top of the crossbar from eight yards.

Cameron burst clear of the Loons back line to run onto a McGowan chip but Grant Anderson raced back quickly enough to challenge as the Dee youngster was shooting, with the ball going harmlessly wide.

The longer the first half wore on the more Dundee forced Forfar back, but the Dee couldn’t find the opening goal. Several promising moves carried Dundee into the penalty area before breaking down with one intricate pass too many.

Forfar did well to keep a clean sheet until half time as they survived a flurry of Dee attacks in the last five minutes of the half. Only a great block by Gary Irvine stopped Max Anderson scoring. Marc McMullan then had to push a dangerous Anderson free kick out for a corner. In the last minute of the half McCallum pulled off a terrific double save to foil Cameron and then McGhee.

James McPake rotated the full squad at half time sending out a completely fresh team. Forfar restricted themselves to six changes, the most noteworthy being the introduction of Gary Harkins. The Loons now had two Deefiant legends on the park because Gary Irvine played for the first hour before being substituted.

The new Dee eleven picked up where the first half team had left off and soon had Forfar in trouble. Declan McDaid cut in from the left to shoot from 18 yards but McCallum saved well.

Eight minutes after the restart Dundee finally took the lead with a trademark goal. Charlie Adam was in space on the left and swung in an exquisite cross that took out the central defenders and left the keeper helpless. Danny MULLEN ran in on schedule and tapped home his volley. That’s what Charlie Adam does. Any Dundee fan can picture what happened even if they have not seen it on film.

Three minutes later Charlie served up his encore. From central midfield he pinged a superb pass over the Forfar defence for Paul McMULLAN to run in from the right, take the ball down and score.

We hardly deserved to see another gem like those two goals, but the Dee skipper was in a generous mood. A third perfect Adam pass carved Forfar open for Luke McCOWAN to run through, take the ball past the keeper with a delicious first touch and shoot into the empty net.

Pre-season friendlies can often be dull affairs, it was a delight to see those three goals with excellent assists in only six minutes.

The Dark Blues could and should have added a couple more goals but had to settle for three. Declan McDaid raced onto a careless backpass and set up Danny Mullen whose shot was cleared off the line. Lee Ashcroft couldn’t quite make clean contact with an Adam free kick. Yet another wonderful pass from Charlie Adam created havoc in the home defence, but neither Mullen nor McCowan could score. A fast Dee break ended with McCowan volleying wide from Christie Elliott’s cross.

In the last minute Forfar should have scored a consolation. A deep free kick was headed back across goal by Ross Meechan and Andy Munro headed a foot wide.

This was the traditional good pre-season work out for the players, but it offered more entertainment than pre-season friendlies usually do. The Dee played some attractive football in the first half, but lacked the cutting edge that they found after half time. There was plenty of good movement from the front players in the second half, and energetic, attacking runs from midfield in the first half. The defences looked comfortable in open play, but offered up a good chance to Forfar from set pieces in each half. Overall it was a fine afternoon out in Angus, and made all the more memorable by Charlie Adam’s passing.