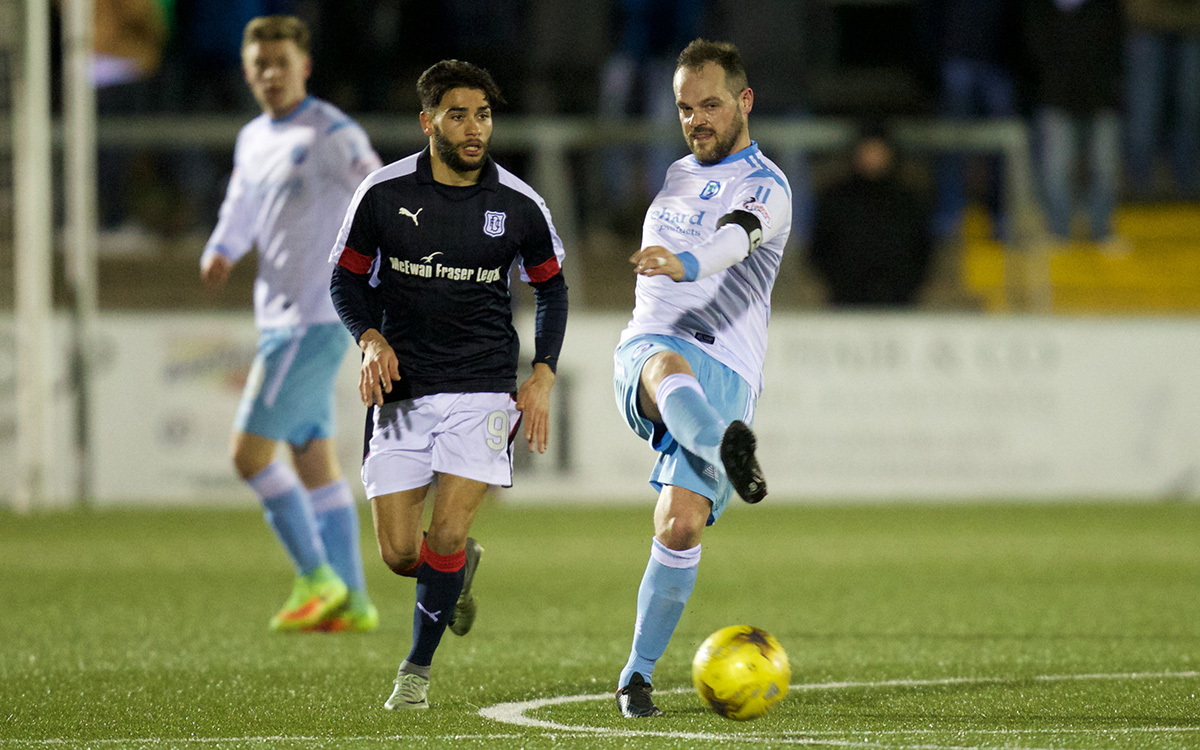 Dundee provided Forfar Athletic’s opposition in Martyn Fotheringham’s testimonial at Station Park tonight and won an entertaining match 3-1. Danny Williams put the Dee ahead in the first half only for Josh Peters to grab a quick equaliser. The Dark Blues earned their win with two fine goals by Faissal El Bakhtaoui early in the second half.

The Dark Blues team was made up of the seven players who were on the bench against Celtic on Sunday with the under 20s filling the remaining spaces. Danny Williams played in a striking role, as he has done before with the under 20s.

The Dark Blue’s defence was disrupted after only 12 minutes when Kosta Gadzhalov went off after receiving treatment. Ian Smith came on to play in the three behind Danny Williams, with Daniel Higgins moving to centre back.

The Dee should have taken the lead when El Bakhtaoui shot wide with only Adam to beat after Smith’s pass found him in space. Forfar won a free kick just outside the penalty area wide on the right and Martyn Fotheringham took the opportunity to go for goal; David Mitchell had to beat his fierce shot away.

Both sides went close in quick succession. First Williams beat Adam to a long ball, but was forced wide and the keeper recovered quickly to save. Forfar went straight up the park and Josh Peters’ curling shot from just outside the penalty area narrowly missed the top corner.

Craig Wighton had a great chance to open the scoring when he ran clear from the half way line, but Adam saved with his feet. Dundee finally broke the deadlock at the end of a neat move on the right. Wighton sent Sam Dryden to the byline and the full back’s low cross was hammered into the net from 10 yards by Danny WILLIAMS.

Forfar took just four minutes to equalise. Josh PETERS combined cleverly with Martyn Fotheringham before taking the ball round Mitchell and sliding it home from a narrow angle.

The only Dundee change at half time was 16 year old Brian Rice replacing Connor Quigley at left back. Dundee were quickly onto the attack and Marc Klok’s snapshot was well taken by Grant Adam. Dundee’s second goal arrived after 50 minutes. Faissal EL BAKHTAOUI raced through the Loons’ defence before scoring with a low, angled drive.

It took only four more minutes for EL BAKHTAOUI to add the third. Picking the ball up 20 yards from goal he hit a beautiful rising shot into the top corner.

18 year old Ian Smith brought a good save from Adam with a fierce shot from just outside the penalty area at the end of a fine run from midfield. El Bakhtaoui tried for his hat trick, but his goalbound shot struck a defender and spun wide for a corner.

On the hour mark the substitutions started in earnest. The game became more disjointed with a shortage of chances in the last half hour. Stuart Malcolm came closest for the Loons with a powerful header from a corner, but he sent it straight at Mitchell. Dundee had some promising attacks with some neat football from the youngsters, but they couldn’t find a fourth goal.

Away from the pressure to earn league points both teams were able to relax and play an open game tonight and they served up a very entertaining match with numerous chances, especially in the first 60 minutes.

Three minutes from time Forfar made the final substitution of the night when Martyn Fotheringham left the pitch to a standing ovation that he has earned through 10 years of loyal service to Forfar Athletic.