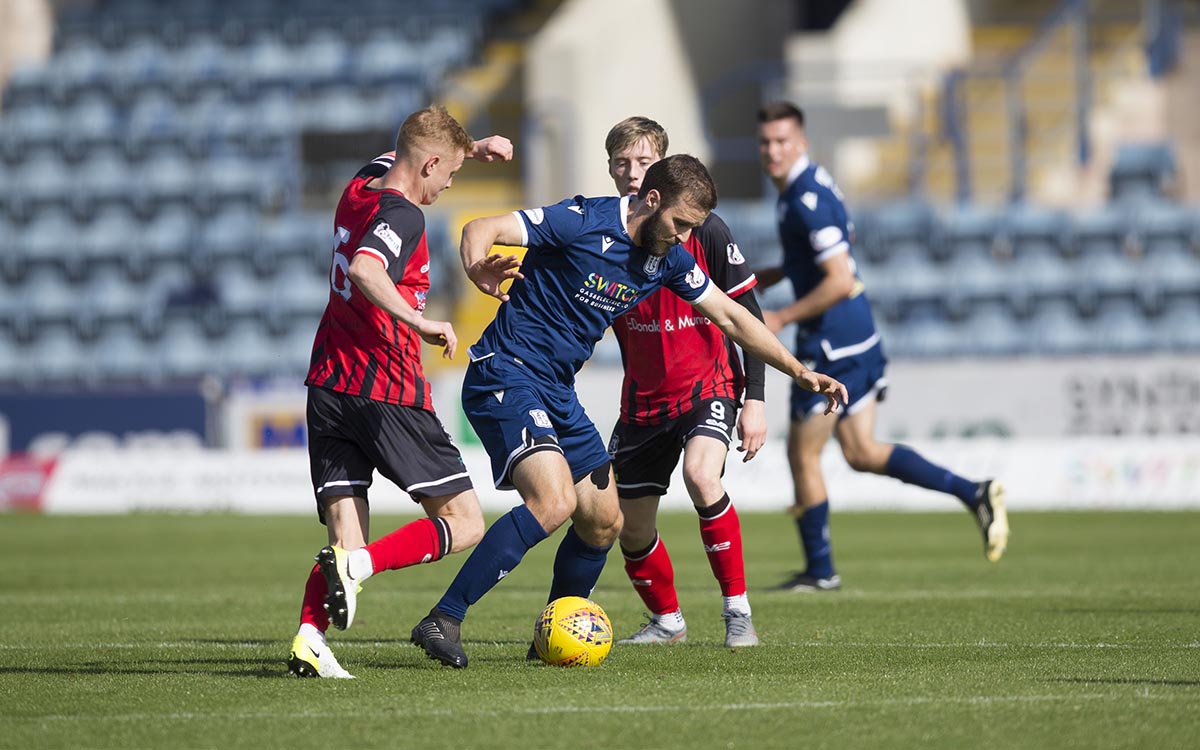 Dundee’s venture into the Tunnocks Caramel Wafer Challenge Cup ended abruptly at the first hurdle with a poor performance and a 2-1 defeat at home against Elgin City. Cammy Kerr put the Dee ahead with a spectacular first half opener, but a wretched two minute spell early in the second half settled the tie. Rabin Omar equalised then Shane Sutherland put Elgin ahead and Calum Ferrie was red carded for a challenge in the build up to the goal. The 10 man Dark Blues grafted away but couldn’t find the inspiration to save the game.

Dundee fielded a strong line up, with four changes from last week’s derby. Calum Ferrie, Josh Meekings, and Paul McGowan all came in, along with new loan signing Sean Mackie, who made his debut.

Any supporters arriving late would have missed nothing as the game took 10 minutes to stutter into action. Only then did a serious attack produce a shot on goal. The Dee put a neat move together with Kane Hemmings running on to Paul McGowan’s pass and forcing a good save from Tom McHale with a low shot.

Dundee spent long spells camped out in Elgin’s half but lacked the penetration to open up a deep lying defence. The opening goal, after 18 minutes, could hardly have been less predictable. Cammy KERR collected the ball on the right wing, moved infield into space, briefly considered his options, and lashed a rising shot into the roof of the net from 25 yards with his left foot.

Kerr had another surging run that took him deep into Elgin’s penalty area. With the crowd shouting “shoot” he tried instead to set up Hemmings, but Bronsky beat him to the ball.

Dundee looked comfortable without being impressive or dominant. The rest of the first half drifted by with the Dee doing most of the attacking. There was still a lack of chances or even good balls into the danger area. The Dark Blues were served a serious warning when Shane Sutherland found space on the left and Calum Ferrie had to tip over Matthew Cooper’s header from the cross.

Andrew Nelson came on for Jamie Ness at half time and Dundee looked far more purposeful in the few minutes after the restart. Hemmings was crowded out before he could shoot, and Nelson sent a ferocious 20 yard shot inches wide of the post.

With the Dee seemingly in control and threatening to add to their lead the midfield and defence switched off and the game turned around in the space of a few minutes.

First Elgin were allowed to build a move far too easily through the midfield and after the ball broke to Kane Hester he stabbed a shot narrowly wide. Dundee didn’t wake up and when Ewan Sparks’ cross was half cleared only as far as Rabin OMAR on the edge of the penalty area, the midfielder had time to pick his spot and steer his shot round Ferrie for the equaliser.

Two minutes later Sean Mackie was under pressure on the half way line and miscued a backpass, sending it high and dropping well short. Calum Ferrie raced out from his penalty area to challenge Hester but the ball broke to Shane SUTHERLAND who rolled it into the empty net. Dundee were punished twice over for the mistake when Ferrie was red carded for his challenge.

Harrison Sharp came on to make his debut with Sean Mackie being withdrawn to allow the 18 year old goalkeeper on. The enforced change still left the Dee’s midfield and attack intact, with half an hour to save the match. They never looked like doing so. Elgin City sat deep, absorbed aimless pressure without great difficulty and looked much the more dangerous side with occasional breakaways.

Stretching a point it could be said there were two half chances for the Dee. Andrew Nelson couldn’t connect cleanly with Declan McDaid’s cutback, and McHale saved comfortably. City’s keeper had no more trouble saving when Josh Meeking got his head to a free kick from substitute Max Anderson, who had come on for his debut. Dundee’s only other effort on goal was a wild attempted finish by McDaid when he tried to shoot through a crowded penalty area after one of the Dee’s few good moves.

A further goal was more likely to come from an Elgin break as they tried to catch out Dundee’s weakened defence. Brian Cameron wasn’t far away with a 20 yard effort and Cammy Kerr had to make a fine last ditch tackle to stop Sutherland shooting. In injury time Elgin should have scored a third goal when Meekings slipped, but Sutherland took too much time teeing up his shot, allowing Kerr to block.

The Tunnocks’ cup is not one of Dundee’s top priorities this season, but that hardly excuses this performance. The only section of the team that might have an excuse are the strikers, who were given almost nothing to work with all through the match. The midfield worked hard, but was usually pedestrian, shuffling the ball sideways, unable to find the right runs or passes to unsettle Elgin’s defence. There were very few worthwhile crosses into the penalty area and a persistent failure to find players in space in wide positions. The defence didn’t have a great deal to do, but was vulnerable whenever awkward questions were asked.

Today was an opportunity to get the derby defeat out of the system and set the team up for the return to league action. That didn’t work out. Few fans will be distressed at the lack of a run in the Tunnocks Caramel Wafer Challenge Cup. However, the performance levels will certainly have to improve for the league campaign ahead.

Sent off: Ferrie (foul on Hester). 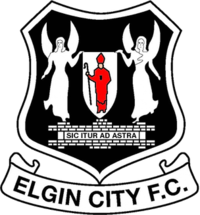