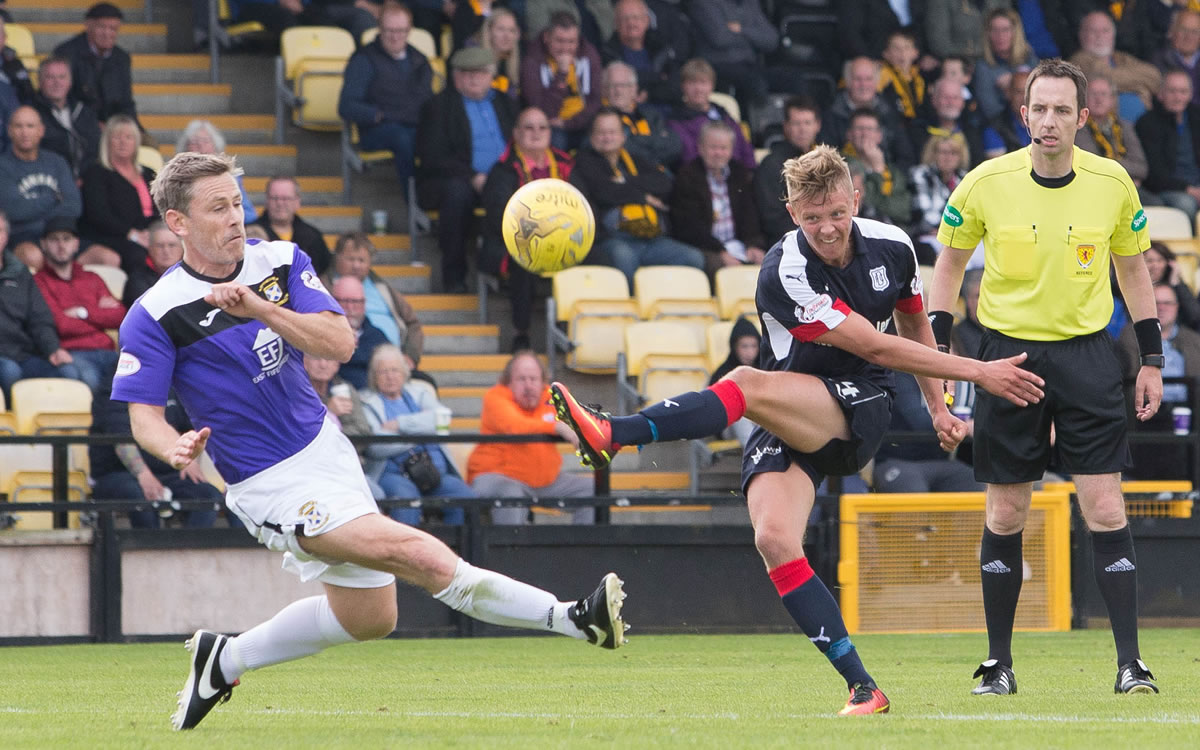 Dundee’s Betfred Cup campaign got off to a poor start in a 1-1 draw at East Fife, with the Dark Blues losing out on the bonus point in the penalty shoot-out. The Dee looked comfortable for the first hour and held a deserved half time lead from Kane Hemmings. East Fife came back strongly in the last 30 minutes and Kevin Smith equalised with 13 minutes left. Home keeper William Muir won the extra point for the Fifers with two saves in the shoot-out.

Three of the new signings made their competitive debuts today; Mark O’Hara, Danny Williams and Michael Duffy. In addition to the long term absentees the Dark Blues had to do without Scott Bain, Kosta Gadzhalov and Greg Stewart, who all had minor injuries. Two more newcomes, James Vincent and Yordi Teijsse were on the bench.

The hosts, last season’s League Two champions, started confidently forcing the Dee onto the back foot. The first five minutes were spent almost entirely in Dundee’s half. However, once the Dark Blues worked themselves into the game the ball started to stick to Dundee’s midfield as Ross and O’Hara dictated the play.

For all the Dee’s possession and careful passing the East Fife defence was able to hold firm, with too many Dundee attacks grinding to a halt with a poor final ball. Craig Wighton was a consistent threat on the left and he triggered a goalmouth scramble when he wriggled to the byline and dinked over a cross that keeper Muir couldn’t hold under pressure. Twice more in the first half Wighton showed great skill on the wings, but each time dangerous looking low crosses failed to find any takers.

The goal that Dundee had been threatening finally arrived after 36 minutes. Energetic pressing in midfield won the ball and East Fife’s defence couldn’t recover as the Dark Blues swept forward. There was a brief scramble around the home goal that ended when the ball broke to Kane HEMMINGS, 15 yards from goal, and he calmly scored with a volley off the inside of the post.

Dundee had their best spell of the game in the 10 minutes between the goal and half time. A series of fast attacks stretched East Fife’s defence and won a series of corners, but there were no more clear chances.

At the start of the second half the Dark Blues picked up where they had left off. East Fife were put under constant pressure and Dundee looked likely to extend their lead. Muir pulled off a fine save from Wighton’s fierce 20 yard shot after the Dee youngster had cleverly combined with Michael Duffy to make space. Jason Kerr then made a vital last gasp tackle to knock the ball away from Hemmings as the striker was about to shoot.

With an hour gone the Dark Blues seemed well on the way to full points, and they should really have been more than one goal ahead. However, they fell out of the match badly in the last half hour, which was played increasingly in Dundee’s half.

East Fife gradually wound up the pressure on Dundee without unsettling a Dark Blues’ defence that looked solid. The home side won a succession of corners that Dundee dealt with competently, but against a strong and swirling wind the Dark Blues struggled to keep the ball away from their penalty area.

Michael Duffy and Craig Wighton were replaced by James Vincent and Rory Loy, neither of whom were able to make any impact as Dundee fell out of the game.

With 77 minutes gone East Fife equalised with their first shot on target. Kevin SMITH curled a 25 yard free kick over the defensive wall and into Mitchell’s top left corner. Far from jolting Dundee back into life the goal turned the match firmly in the Fifers’ favour. The Dark Blues offered nothing in attack in the later stages. The zip with which they were playing on either side of half time had vanished and they couldn’t keep the ball or threaten the home defence.

East Fife’s eager running unsettled the Dee’s defence without making any real chances from open play. The Fifers were much more dangerous from set pieces in the tricky wind. Mitchell had to beat away an awkward corner from Lamont that the wind threatened to sweep into the goal. The Dee keeper then had to tip over a free kick from the same player as East Fife looked far more likely to grab full points with a late winner.

After 90 minutes, with each team having earned the usual point from a draw, the match went straight to a penalty shoot-out to decide who would win the bonue point. East Fife went first and Scott Mercer scored. Kane Hemmings levelled and David Mitchell then pulled off a low save from Paul McManus. William Muir cancelled out the Dee’s advantage by saving from Rory Loy and Chris Duggan put the Fifers ahead. Muir saved again, from James Vincent and Mark Lamont’s successful conversion had the Dee deep in trouble. Danny Williams briefly kept Dundee in contention, but Scott Robinson sealed the extra point for East Fife to win the shoot-out 4-2.

Technically this was not a defeat for Dundee, but it certainly felt like that for the fans. The Dark Blues did well enough in the first hour, but crucially failed to turn midfield dominance into a winning lead. Neat play in the middle too often fizzled out through an inability to find a decisive pass or cross. Dundee spent plenty of time in the Fifers’ penalty area, but usually failed to get in a shot against a packed, hard working defence.

The real story of the day is Dundee’s slump in the last third of a game they looked like winning. East Fife did well, but the Dark Blues should have been able to handle their fightback with more assurannce and can have no complaints about the disappointing outcome.