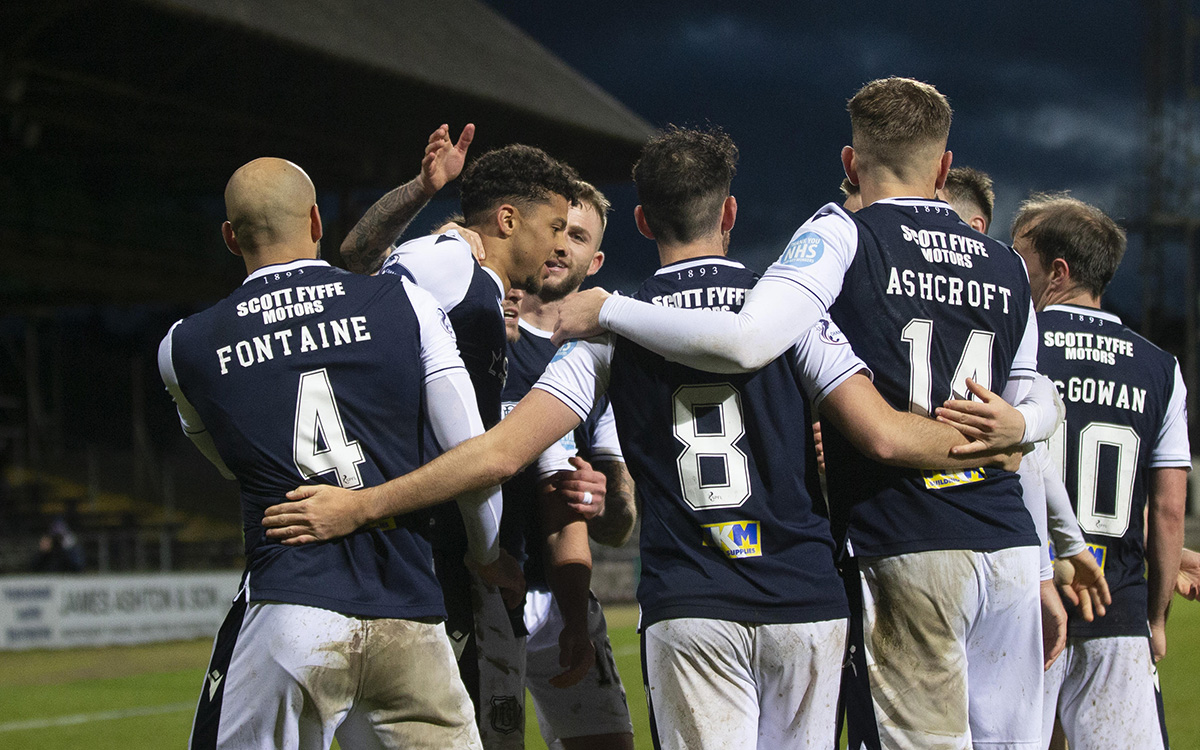 Dundee threw away a three goal lead in a remarkable game at the Kilmac Stadium allowing Dunfermline to escape with a point from a 3-3 draw after scoring three times in the final 16 minutes. Charlie Adam gave the Dee a well deserved half time lead with a superb goal, and Osman Sow added a second early in the second half. Liam Fontaine’s goal after 70 minutes should have sealed a valuable win but the Pars took over in the last 20 minutes. Paul Watson pulled a goal back and a Declan McManus penalty ensured the momentum was with the Pars in the closing stages. It still looked like the Dark Blues would hold out, but with the last kick of the match McManus scored his second with a free kick to give the Pars an unlikely draw.

Dundee’s only change from the team that drew in Inverness was Osman Sow starting instead of Alex Jakubiak. The Pars brought Steven Whittaker and Lewis Mayo in for Aaron Comrie and Fraser Murray after their Beftred Cup quarter final against St Johnstone.

The Dark Blues started promisingly, and after two minutes a well worked attack ended with Osman Sow heading over from Christie Elliott’s cross. Another good move gave Jordan Marshall space to cross for Jordan McGhee, whose close range volley was kept out by a combination of the woodwork and keeper Owain Fôn Williams.

Danny Mullen’s snapshot from 18 yards curled just past the far post as the Dee continued to dominate. Dunfermline might have been on the back foot, but showed hints of the danger they carry with a couple of lively attacks that the Dundee defence did well to handle.

A fast Dee break allowed Paul McGowan to slip Christie Elliot in on the right and Fôn Williams again saved the Pars, blocking with his feet. Charlie Adam went close with a 20 yard shot and a low Mullen cross flew across goal with no-one able to get a touch.

Dunfermline’s only dangerous effort on goal came from a slack Elliott pass that allowed Kyle Turner to run in from midfield and Jack Hamilton did well to save his 20 yard shot.

Ten minutes from the interval Dundee scored the goal they deserved. Charlie Adam picked up the ball in space on the half-way line. Dunfermline were slow to close him down and ADAM ran on before scoring with a magnificent rising shot from 35 yards.

The Dark Blues could have extended their lead in the first minute of the second half. Paul McGowan’s flick left Sow with only Fôn Williams to beat but the Par’s keeper spread himself to make a fine save. The Swedish striker had to wait only a few more minutes for his first goal for the club, however. Charlie Adam whipped in a perfect free kick from the right and SOW’s close range header left Fôn Williams helpless.

Dunfermline had been largely passive for the first 50 minutes but pulled themselves together to try and make the game more of a contest. The visitors were much more effective in midfield, but couldn’t get through a solid Dee defence. They created their first chance of the half after 67 minutes when the ball broke to Declan McManus on the edge of the penalty area but Jack Hamilton got down well to save the low shot.

The game should have been settled after 70 minutes when Liam FONTAINE took Charlie Adam’s corner on the volley to score from 12 yards. Adam, who was injured, was then replaced by Max Anderson after an excellent performance.

Doubtless there will be a lengthy inquest into what went wrong next. After 77 minutes Paul WATSON pulled a goal back with a powerful header from Ryan Dow’s corner. Four minutes later a clumsy challenge by Lee Ashcroft brought Lewis McCann down just inside the penalty area when the Pars’ substitute had his back to goal and there was no real danger.

There were still nine minutes of regulation time and three minutes injury time, but the Dark Blue defence coped well until McManus was fouled 25 yards from goal. McMANUS took the free kick himself, bending his shot inside Hamilton’s post to rescue a point with the last kick of the match.

For the first hour Dundee were very good, playing their best football of the season. Up to the 75 minute mark there seemed no chance of Dunfermline saving the game. However, once they pulled a goal back the match was transformed and the visitors had all the momentum.

It would be wrong to say that this was simply a defensive collapse. The Pars struggled to open up the Dee defence in open play. However, the Dundee midfield vanished. They couldn’t hold the ball or stop the Dunfermline midfield as the visitors swarmed forward. The Dark Blues were unable to settle in possession and close the game out. It was far too easy for Dunfermline to get the ball into dangerous positions where anything might happen, and happen it did, three times.

The totally unnecessary loss of two points is obviously a blow, but what is also disappointing is that the story of the game was the late drama when it should have been all about a fine Dundee performance. For the first hour this looked certain to be the Dark Blues’ best performance of the season, with an inspirational display by captain Charlie Adam. The Dee need to reach that standard for the full 90 minutes. As for the last quarter of an hour – never again.