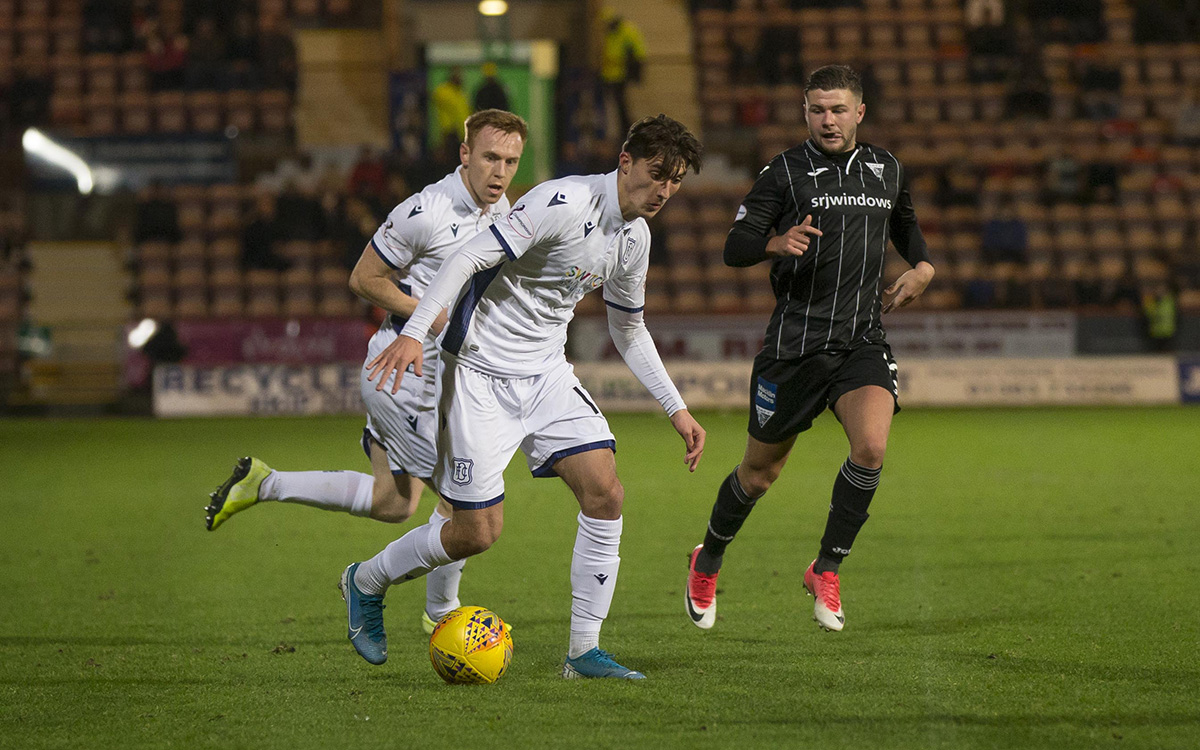 The Dark Blues went down 2-0 to the Pars in the televised Friday night game in Dunfermline. Ryan Dow and Kevin Nisbet settled the game with a pair of fine goals in the first half. Until then Dundee had looked the better team but once the Pars were in the lead they never looked back. They went on to take control impressively in the second half and earned all three points without too much trouble.

Dundee made two changes from the cup tie against Motherwell. Ross Callachan and Lyall Cameron both came in for their first starts in Dark Blue. Shaun Byrne moved onto the bench and Jamie Ness was injured. The Pars also had two changes. Kyle Turner started in the place of Lewis Martin and Cameron Gill replaced Ryan Scully in goal.

The Dark Blues started on the front foot and dominated territorially in an opening 20 minutes that produced little action and less excitement. Neither goalkeeper was called upon to do more than make routine catches from crosses. Dundee had been slightly the tidier side, but both teams were guilty of giving the ball away carelessly.

The Pars’ attacks had carried no threat until they suddenly clicked into gear and created the sort of goal that had seemed highly unlikely. After 28 minutes Dominic Thomas wriggled past Cammy Kerr on the left wing and from close to the corner flag he screwed over a powerful cross for Ryan DOW to score with a diving header at the far post.

The goal changed the game. The Dark Blues became more nervous and error prone while the Pars grew in confidence. Paul Paton had a go from 25 yards out and hammered his shot a couple of feet over the bar.

Six minutes from the interval Dunfermline again produced a high quality goal. Dundee lost possession just inside their own half on the right. Kevin NISBET picked up the ball, ran in from the wing and scored with a fierce shot across Jack Hamilton from 18 yards.

Without ever playing particularly well the Pars were two goals ahead, having scored with their only two serious attacks. Dundee’s defence had been caught out badly under minimal pressure.

Lyall Cameron was withdrawn at half time and the more experienced Danny Johnson was sent in to try and spark a fightback. However, it was the home side who came storming out from the restart. Dunfermline were unrecognisable from the side that had stuttered badly for most of the first half. They tore at Dundee who had Jack Hamilton to thank for an excellent second half display that prevented further defensive damage. Three minutes into the second half Hamilton made a superb save to turn Nisbet’s glancing header against the post.

Most of the action was around the Dee’s penalty area as the Pars pushed for a third goal. They were sharper, more aggressive and far more dangerous in the build up than in the first half.

Just before the hour Ollie Crankshaw came on for Paul McGowan and the young Wigan loanee had a promising debut on the right wing where he gave the Pars’ defence an uncomfortable time. Alas, there was no end produce and Dundee never came close to a goal that might have started a comeback.

The serious action was all in and around the Dee penalty area. Dunfermline opened up the Dee with the best move of the match, playing Euan Murray in on the left. He flashed a low cross through the goalmouth, and only a desperate lunge by Declan McDaid turned the ball out for a corner before Nisbet could tap the ball into the empty net.

AS the game became increasingly open Hamilton twice saved superbly when Dunfermline played men through on goal. First he foiled Dow and then Nisbet when a third goal looked certain each time.

Danny Johnson sent a shot on the turn over the bar, and another snapshot well wide. Ross Callachan had a borderline claim for a penalty. That was all the Dee had to offer as the game fizzled out. Dunfermline had looked content with their two goal lead, but at the end had another surge for a third goal, with Nisbet coming closest with a shot that was charged down.

After 25 minutes Dundee looked the side that was more likely to put their game together and go on to secure victory. However, once Dunfermline had helped themselves to two fine goals there was no doubt about the final outcome. The only strange aspect to the Pars’ victory was that they scored the decisive goals when they were playing poorly and then couldn’t find the net when they stepped up their game impressively. Jack Hamilton’s second half performance went a long way to explaining that.