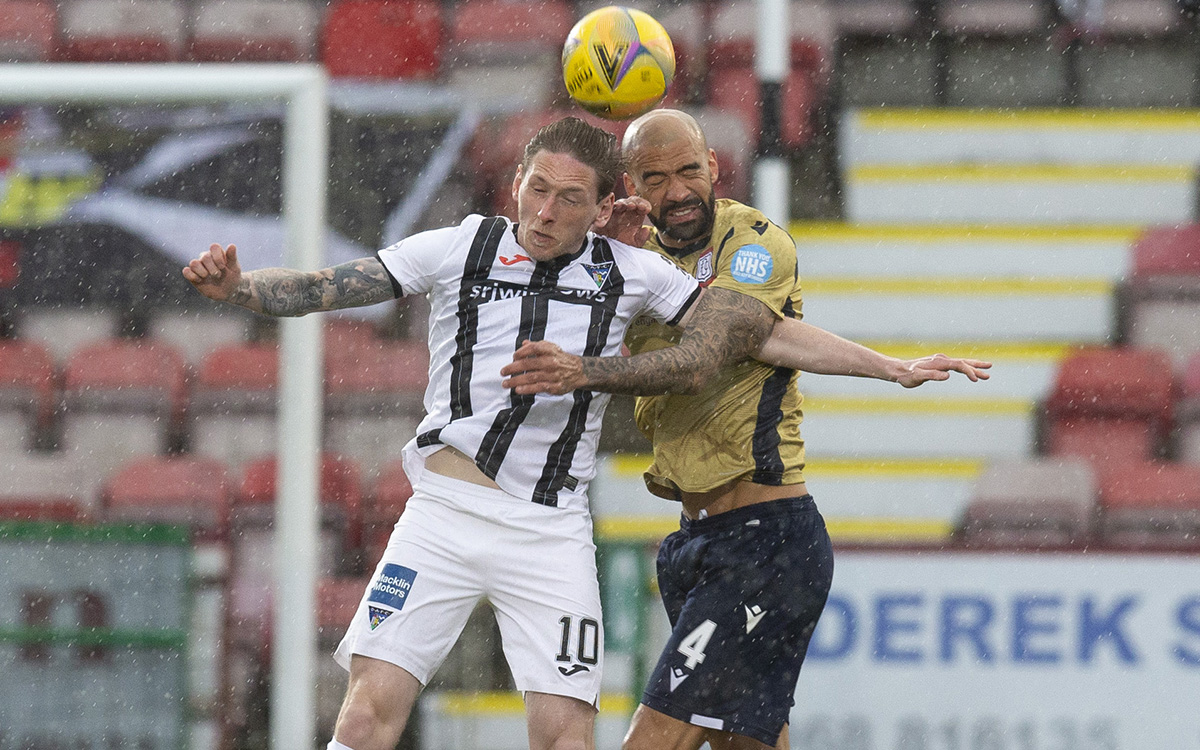 Dundee had to make do with a 0-0 draw against Dunfermline at East End Park this evening. The Dark Blues shaded the first half and dominated after the interval but couldn’t find a goal. The Dee were rarely in trouble and played some neat football, but failed to make the most of some good opportunities.

James McPake made three changes to the team that drew with Morton. Central midfielders Paul McGowan and Max Anderson were missing through injury and were replaced by Jordan McGhee and Shaun Byrne. The third change was Cammy Kerr returning in the place of Christie Elliott.

The Pars kicked off but the Dee won possession and tore at their hosts looking for a quick goal. Paul McMullan raced down the right. He fired in a low cross. Jason Cummings’ shot was charged down and the ball broke for Jordan McGhee on the edge of the penalty area, but his first time shot flew inches wide.

Dunfermline also had an early opportunity when Liam Fontaine missed a long ball down the right. McManus crossed into the goalmouth where Lee Ashcroft managed to turn the ball away, but only as far as Craig Wighton, who sliced his shot well wide.

Ashcroft stayed up after a long throw by Liam Fontaine and headed wide when Danny Mullen flung in a promising cross. Danny Mullen also missed a decent chance heading wide poorly from Jason Cummings’ tempting cross to the near post.

Unfortunately Jordan Marshall, clutching his hamstring, limped out of the match after only 19 minutes. Cammy Kerr moved to left back and Christie Elliott came on to play at right back.

The Dark Blues coped well with the enforced change and continued to look the better team. The defence hadn’t been entirely comfortable but it was certainly no weaker after Marshall’s departure. However, McDaid missed his raiding partner; Cammy has many fine attributes, but racing down the left wing and firing over dangerous crosses is hardly one of them.

The best move of the match came from the Dee midway through the half. Mullen and McDaid put together an incisive fast passing move to send McDaid in on goal, but Fôn Williams parried the fierce shot.

The Dark Blues were playing neat, attacking football trying to prise open the Pars defence, but the final crosses and passes were never quite good enough.

Dundee put in some sterling work in midfield stopping the Pars building attacks, but Dunfermline twice managed to work their way into dangerous positions. The first time Whittaker’s pass allowed O’Hara to shoot, but straight at Legzdins. The other attack was the Pars’ best move of the match, a quick attack through the middle. Legzdins clutched the ball at full stretch from Henderson’s low shot from 22 yards, though the veteran keeper would have been embarrassed if he’d done anything else.

The Pars came out after the interval obviously determined to impose themselves on the game and pinned the Dee back for the first five minutes. Nevertheless, pleasingly, Dundee coped comfortably with Dunfermline’s early attacking.

When Dundee managed to attack the Pars defence they gave the hosts an uncomfortable few minutes. The home defence had a nervous and untidy spell and were relieved to get the ball back to the other end of the park. Thomas had an accurate curling shot from 22 yards that Legzdins pushed away, with McDaid tidying up.

After that the Dark Blues took over and dominated the rest of the match. Frustratingly, the endless possession and pressure never ended with clear chances. There were occasional shots but never from a great position; they were always well wide or straight at Fôn Williams. The crossing was erratic; occasionally crosses were mishit, but more often they were either dealt with by the central defenders, or there were no Dee forwards making the right runs.

The nearest Dundee came to a goal in the second half was when Paul McMullan whipped in a free kick and Danny Mullen’s glancing header drifted past the far post.

Dunfermline might have nicked an undeserved winner from a rare menacing attack but Liam Fontaine stood firm to block Henderson’s shot.

Osman Sow replaced Jason Cummings for the last 20 minutes, and Jonathan Afolabi came on for Danny Mullen shortly before the game entered injury time. Dundee couldn’t quite put their game together in the final third, and the match limped untidily through the six minutes of injury time.

The draw feels like two points dropped. Dundee were the better side and should have won. However, Dundee maintained a good standard for almost the whole match. The midfield always imposed themselves on the Pars, without being able to find the passes to open up Dunfermline. After an opening half hour, in which they sometimes looked vulnerable, the defence was solid in the second half, and deserved their third consecutive away clean sheet. In attack, however, the Dee were never quite on their best form.

Throughout the match the Dark Blues continually threatened to be on the verge of scoring, but they couldn’t quite make it happen. There was never a stage when a Dundee goal would have been a surprise, and that certainly couldn’t be said about the Pars, who dropped out of the match for long spells in the second half when Dundee were largely able do what they wanted until they came to the point where it really mattered, the final third.

East End Park is a difficult place to visit. Dundee do not have a good record there. A point is maybe not a bad result from a game in which the Dee had to replace the starting central midfield, and then reorganise the defence because of an early injury. It was pleasing to see Dundee handle these problems so well, go on to dominate the match and extend the unbeaten run to five games.