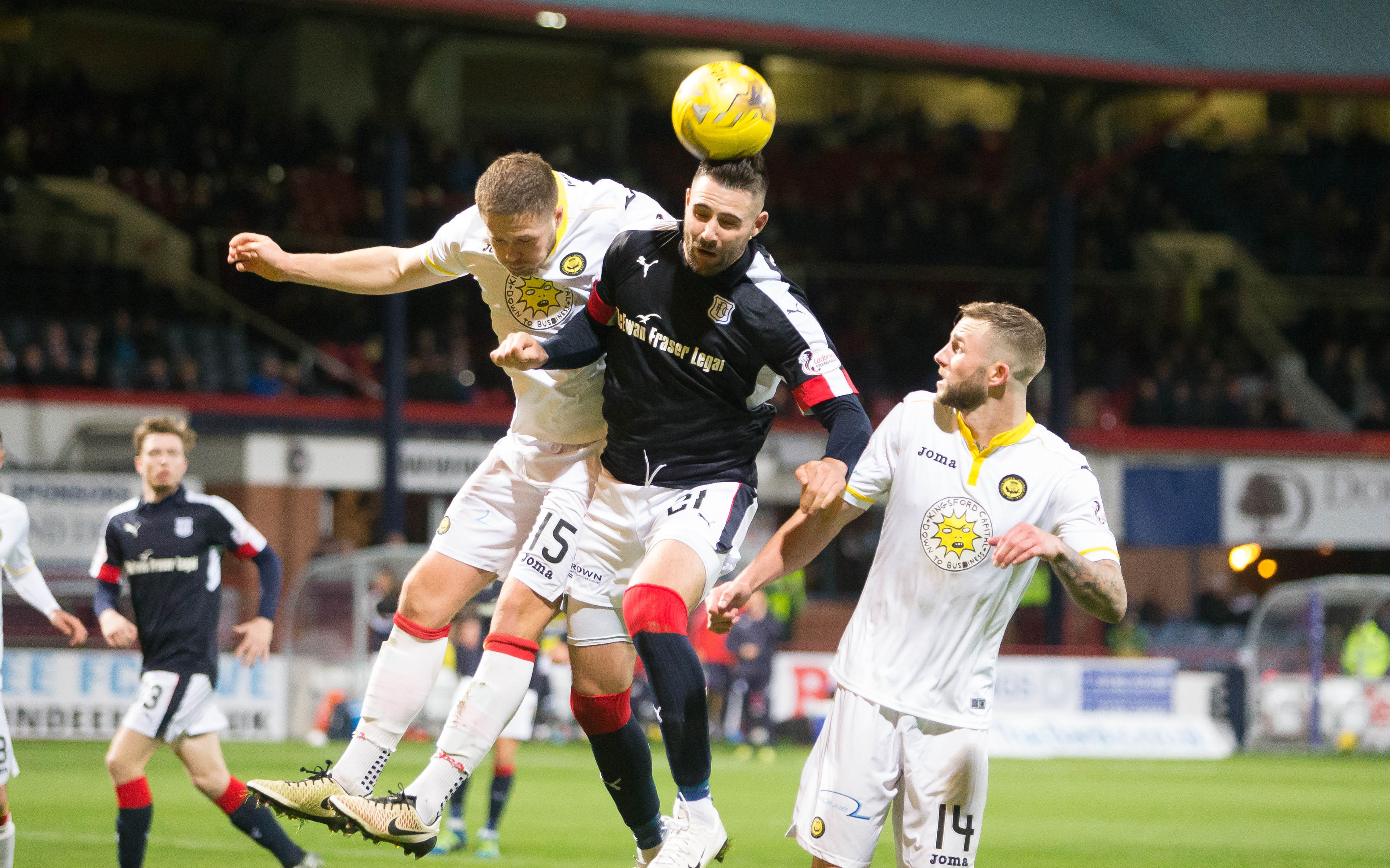 Dundee were beaten in a bottom of the table clash against Partick Thistle at Dens Park, losing 2-0 in a match dominated by the visitors. Ade Azeez gave the Jags a half time lead, and when Kris Doolan added a second midway through the second half the points were safe for the Jags, who saw out the game comfortably.

The Dark Blues made four changes from Sunday’s defeat in Perth. Cammy Kerr came in to play right back with Tom Hateley moving into central midfield. Marcus Haber made his debut in attack, joined by Rory Loy, and Craig Wighton also came in to play right midfield as Dundee reverted to a 4-4-2 formation. James Vincent, Nick Ross, Yordi Teijsse and the injured Faissal El Bakhtaoui dropped out. The Jags were unchanged after drawing at home to Ross County.

Thistle started the better side and looked more confident and composed in possession throughout the game. Jags’ new English striker Ade Azeez headed against the crossbar from close range after Kris Doolan had headed on a corner. Azeez, a signing fom Wimbledon, was proving a real handful for the Dundee defence. He seemed certain to open the scoring after taking a long ball and turning insideof Kevin Gomis, but Darren O’Dea raced in with a goal saving tackle as Azeez was about to shoot.

Thistle were playing neater football through the midfield and were more creative and dangerous than a nervous Dundee team who couldn’t hold the ball or make penetrating passes. The Jags took a deserved lead after 28 minutes when Abdul Osman lofted a cross beyond the far post and AZEEZ was unchallenged as he rose to head over the helpless Bain.

Late in the first half Kevin Gomis was replaced by Kosta Gadzhalov. Whether it was tactical or an injury wasn’t clear, but certainly Gomis had been struggling to cope with Azeez.

The Dark Blues managed to put together passing moves only twice in the first half. Each time the move fizzled out before anyone could get a shot on goal. The only two serious efforts on goal before the break were a Cammy Kerr shot from 25 yards and a Darren O’Dea header following a free kick, both missing the post by a couple of feet.

Sadly there was no improvement after half time as Thistle settled onto the their lead with ominous ease. The Jags were far more urgent and incisive, and should have added to their lead when Kris Doolan sent Azeez clear. Scott Bain race from goal to make a great save, but was helpless when Thistle were handed a soft goal after 61 minutes. Kevin Holt took a short pass from Bain and was caught in possession by Azeez who rolled the ball across goal to leave Kris DOOLAN with a simple chance.

Michael Duffy came on for Rory Loy shortly before the goal, and Yordi Teijsse replaced Danny Williams. Cammy Kerr moved over to play left midfield with Tom Hateley switching to right back. The changes made no difference and Thistle continued to dominate in midfield. The toothless Dark Blues were restricted to optimistic long balls, and crosses from poor positions that were dealt with easily by Thistle’s defence.

The match seemed over as a contest long before the end. Thistle central defender Danny Devine went close with a header from a free kick and Abdul Osman wasn’t far away from 30 yards. Dundee didn’t force a save from Ryan Scully until 84 minutes when he beat away an O’Dea header. That was the Jags’ keeper’s last piece of action because he was injured along with skipper Abdul Osman in a pile up at a Dundee corner. Both had to be substituted, resulting in five minutes of injury time during which Thistle calmly held the ball and ran the clock down.

This was Dundee’s sixth successive defeat and tonight’s performance hammered home the point that Dundee are in trouble at the bottom of the table. The defence struggled against Thistle’s forwards and the midfield was second best throughout. Dundee’s forwards had poor service and were rarely in the game, especially in the second half. Marcus Haber did show some promising touches in the first half, but couldn’t get involved after the break. A big improvement is needed if the Dark Blues are to get out of their current predicament.